Don’t waste time
Get a verified writer to help you with Global Сlimate In Modern World
Hire writer
$35.80 for a 2-page paper

The Kyoto Protocol was negotiated under the United Nations Framework Convention on Climate Change and adopted by parties in 1997. There are 192 countries bound by protocol, two significant parties who declined to commit were the United States and Canada. The United States signed the treaty in 1998 however it was never submitted for ratification. Canada withdrew from the treaty after it was unable to meet a goal and would have been assessed financial penalties. The Kyoto Protocol requires more substantial effort from developed nation using the principle of "common but differentiated responsibilities.

" Developed nations are seen as more able to battle climate change and already having emitted significant greenhouse gasses during its development therefore the United States would be responsible to put more effort into their greenhouse gas emissions than less developed nations. The United States" criticized this principle because of the disproportionate amount of effort it would require while large developing nations are allowed much less emissions regulation. Anotherissue with the Kyoto protocol is that countries can commit to Certified Green House Gas Reduction Projects, which may have no net greenhouse gas reductions through several loopholes in the protocol. Overall the Kyoto Protocol, while reducing some greenhouse gas emissions has not been as effective as it should have been due to several issues in the treaty and some countries not participating.

Due to the lack of drive for climate change legislation in the legislative branch of the United States government the Obama Administration has had to take action to make changes in greenhouse gas emissions. The president"s administration has used the Clean Air Act to control greenhouse gas emissions from various sources. The EPA has determined that greenhouse gasses may endanger public health and welfare after the court case  Massachusetts v. EPA labeled greenhouse gasses as pollutants. In 2010 the EPA began stricter emissions from vehicles and other equipment. The EPA used the regulations of mobile sources to regulate some large industrial sources. Federal courts have upheld the EPA's classification of greenhouse gasses as endangering the public and the EPA's mobile source regulations. The Obama Administration has also developed a non-binding climate action plan to address climate change and its effects. The three faceted plans involves reducing America's carbon pollution, preparing the United States for the effects of climate change and leading international efforts to reduce climate change. Its intended regulation of power plants will likely be heavily challenged in congress and courts. The plan is dependent on congressional and public support and can be easily be slowed or deliberately made to not be executed by the next presidential administration.

The Obama administration's actions to address global climate change are necessary as the current congress will not take action to address this issue which is of paramount importance to the future of the world. America's overall reluctance to committing to climate change policy will be detrimental to the addressing of one of the greatest problems humans will face in upcoming years. 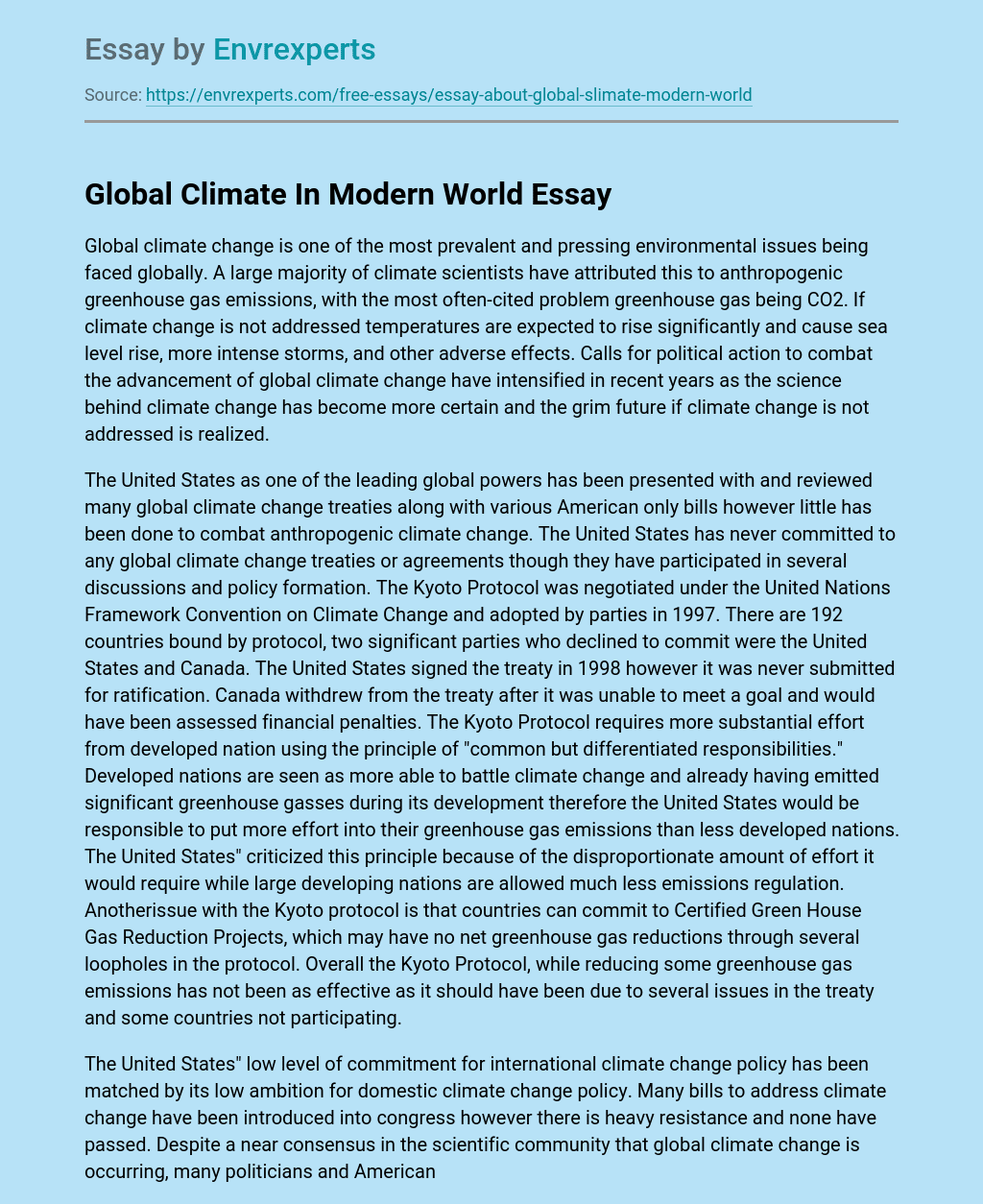