Global Warming and the Dyson Company

Dyson Company works hard to ensure that they produce products for the best quality to the satisfaction of their customers. Dyson is currently the leading vacuum cleaner in the market. It massive innovation has contributed to its achievements. Moreover, the firm conducts market researchers now and then which aim at investigating the current trends in the market, the customer's perception of their products and to detect any change in their products. The innovations such as the use of eco-friendly machine are essential since they outdo Dyson competitors due to the production of high-quality products.

Don’t waste time
Get a verified writer to help you with Global Warming and the Dyson Company
Hire writer
$35.80 for a 2-page paper

The company has raised concerns about manufacturing electric cars to eliminate the diesel cars which are environmental effective.

The idea about the production of electric cars is a good one. The use of battery-powered cars will not only change the range of brands the company produces but it will also put Dyson among other electric cars producers (Howey,  2011). The company is its introduction phase, and if the period is successful, the company will start competing with other mainline electrical car manufacturers.

There is an advantage in this venture as it is clear that electric cars are the future. Dyson will not only be manufacturing traditional vehicles. Dyson will be a step further from the manufacturers of carbon-based fueled cars. The electric cars will be having a very high demand as people will be attracted to use them to avoid environmental impacts that come with the use of vehicles that use diesel and petrol. Dyson will also be listed among companies that are thriving to ensure environmental protection; this will be a rallying point, and it will be easy for them to market this electric car as UNEP and other worldwide ecological bodies will authenticate them (Essays, UK. 2013). Dyson has an advantage since they already have the capital. The company has a well-planned budget to ensure a successful first phase of an electric car. The company has hired top engineers from Tesla, BMW, and Aston Martin.

Dyson uses unique methods of production that has seen the company become the number one company in the U.K. (Essays, UK. 2013). The company employs special and unique technology that ensures that even the competitors' Inability to cope with it. The company has outstanding and experienced engineers that work round the clock tirelessly to produce very efficient products from hand dryers to vacuum cleaners. It is also obvious that their well-planned idea of electric cars will also be unique. About the resources, the company makes around 100 million pounds which is a good amount to ensure brand continued relevance, and it's also an indicator of the company's unique products that continue to be sold all over the world. The company has a strategic worldwide network of distributing its products (Financial Times,2017). The company is unique in that they invest in research by funding research both in local and international markets. The researchers are people who are well informed about the market and are creative on methods and strategies that ensure an increase in sales in different countries. The company is tolerant to failure as they believe failure is a step that ensures an improvement of their products. The company can deal with failure, and this makes the company able to take many risks to provide improvements in their brand. Sir James Dyson is a very creative person and has learned a lot about risk taking as he built the company as a risk as he was not sure of the success. The company has profound secrets about its production, and in this way, competitors don’t have a chance to steal the company’s ideas and strategies (Financial Times,2017).

Electric Cars Vs. Traditional Cars Effects On The Environment

Global warming is a modern-day danger. It is a menace that if not tackled which may continue to bring adverse hazards to human beings. Gases produced by cars are the primary causes of air pollution. Traditional Cars produce and emit carbon dioxide Sulfur (IV) oxide and nitrogen gases (Howey, 2011). All these gases constitute greenhouse gases, causing the greenhouse effect. The greenhouse effect is the occurrence in which gas reach the ozone layer and covers it, and when light rays strike the earth, instead of being reflected back, they are trapped in the atmosphere causing excessive heat. This effect brings about global warming which leads melting of ice caps thus unexpected flooding also due to the rise of sea levels; wildfires are also expected and other many effects (Shepardson et al., 2011). Electric cars produce fewer emissions than traditional vehicles. This is because electric vehicles are charged and not fueled by hydro-carbon drawn fuels, e.g., diesel and petrol (Westbrook, 2001). The environmental impacts of using electric vehicles are much less than the enormous implications that traditional Car brings. However, there is a small amount of carbon dioxide produced during the creation of electricity which is used to charge batteries in electric cars. There are however hybrid cars which use both fuels and power and emit fewer greenhouse gases. It is a fact that even a hybrid car emits greenhouses more than a purely electric vehicle (Westbrook, 2001).

In conclusion, Dyson is an ambitious company, and the idea of making electric cars may not give returns easily considering the massive budget. However, through their hard-working engineers and specialist, the program will be a success, and their investment will bear fruits through huge profits. Dyson should thrive to be the best company in the world by ensuring better brands and better marketing strategies. The electric car project should not be forced to work to bring fast profits but should be a project to provide the company has all it takes to transform and win people by making a car that satisfies different needs of the customers.

Global Warming and the Dyson Company. (2021, Oct 31). Retrieved from http://envrexperts.com/free-essays/essay-about-global-warming-and-dyson-company 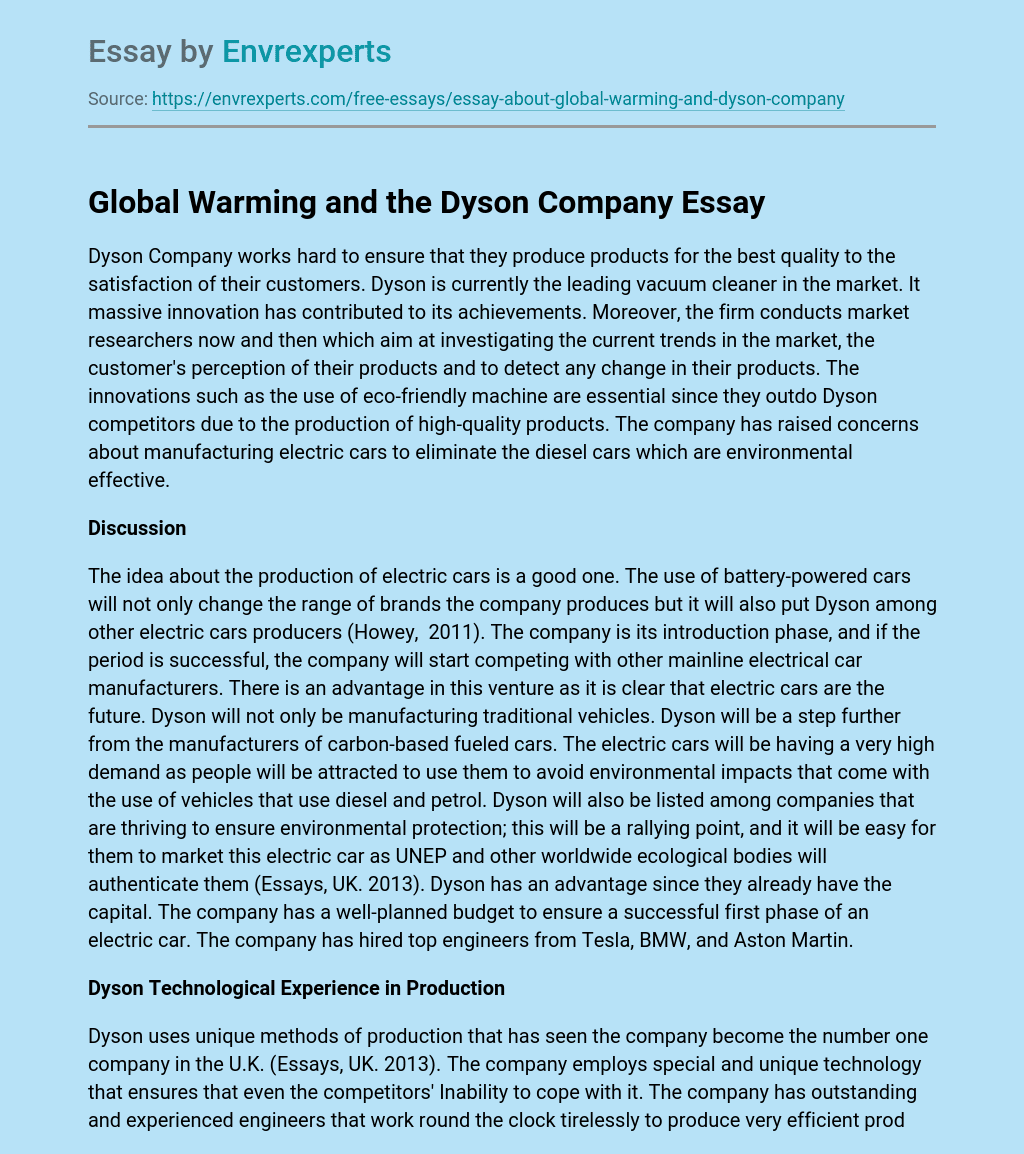