Global Warming and It's Beneficial in Some Areas

Is it hot in here, or is it just me? That is the question young Billy asked himself one excruciatingly hot day. The air was thick with humidity and the sweat poured off him like the rain of a heavy spring downpour as he delivered his mid-day papers in his hometown of Seattle. Normally, he would not have thought twice about this kind of heat. Normally, it isnit 90 degrees in April. This isn't a far-fetched idea cooked up by a lone scientist pouring over minute data.

Don’t waste time
Get a verified writer to help you with Global Warming and It’s Beneficial in Some Areas
Hire writer
$35.80 for a 2-page paper

Should we be sweating global warming? Not really. Global warming isn't as dangerous as people think it is, it's actually beneficial in some areas. Global warming will lead to longer growing seasons, increased rainfall, and is widely preferred over global cooling, which was thought to be a problem about a quarter-century ago (Milloy). This is what the National Academy of Sciences published in after the Kyoto Treaty in 1997. World leaders gathered in Kyoto, Japan, in December 1997 to consider a world treaty restricting emissions of "greenhouse gases," chiefly carbon dioxide (CO2), that are thought to cause "global warming", severe increases in Earth's atmospheric and surface temperatures, with disastrous environmental consequences.

Predictions of global warming are based on computer climate modeling, a branch of science still in its infancy. The empirical evidence actual measurements of Earth's temperature show no man-made warming trend. Indeed, over the past two decades, when CO2 levels have been at their highest, global average temperatures have actually cooled slightly.

To be sure, CO2 levels have increased substantially since the Industrial Revolution, and are expected to continue doing so. It is reasonable to believe that humans have been responsible for much of this increase. But the effect on the environment is likely to be benign. Greenhouse gases cause plant life, and the animal life that depends upon it, to thrive. What mankind is doing is liberating carbon from beneath the Earth's surface and putting it into the atmosphere, where it is available for conversion into living organisms.

On the surface, global warming might look like it is actually going to benefit the earth's atmosphere. The increases raise in rainfall will promote growth and will cause arid areas to be able to grow plant life, which is ever so important in this constantly growing world of ours. These all point to global warming as a good thing. It is not. Scientists have calculated that evaporation will increase as the climate warms, which will increase average global precipitation. But, the moisture is likely to decline in many regions, and intense rainstorms are likely to become more frequent. Sea level is likely to rise two feet along most of the U.S. coast. Also, the polar ice caps will melt, contributing to the rise of sea levels and flooding low-lying coastal areas of the world, completely covering cities such as New Orleans.

In the United States, approximately 6.6 tons of greenhouse gases are emitted per person every year. Emissions per person have increased about 3.4% between 1990 and 1997 (Elliot 26). Most of these emissions, about 82%, are from burning fossil fuels to generate electricity and power our cars. The remaining emissions are from methane from wastes in our landfills, raising livestock, natural gas pipelines, and coal, as well as from industrial chemicals and other sources.

Fossil fuels are hydrocarbons, which contain varying amounts of hydrogen and carbon. All fossil fuels create carbon dioxide when burnt, but some produce more than others. Coal has a high carbon content and then burnt produces mainly carbon dioxide and heat. Coal, unfortunately, is the largest fossil fuel being consumed today.

Global Warming and It's Beneficial in Some Areas. (2021, Oct 31). Retrieved from http://envrexperts.com/free-essays/essay-about-global-warming-and-its-beneficial-some-areas 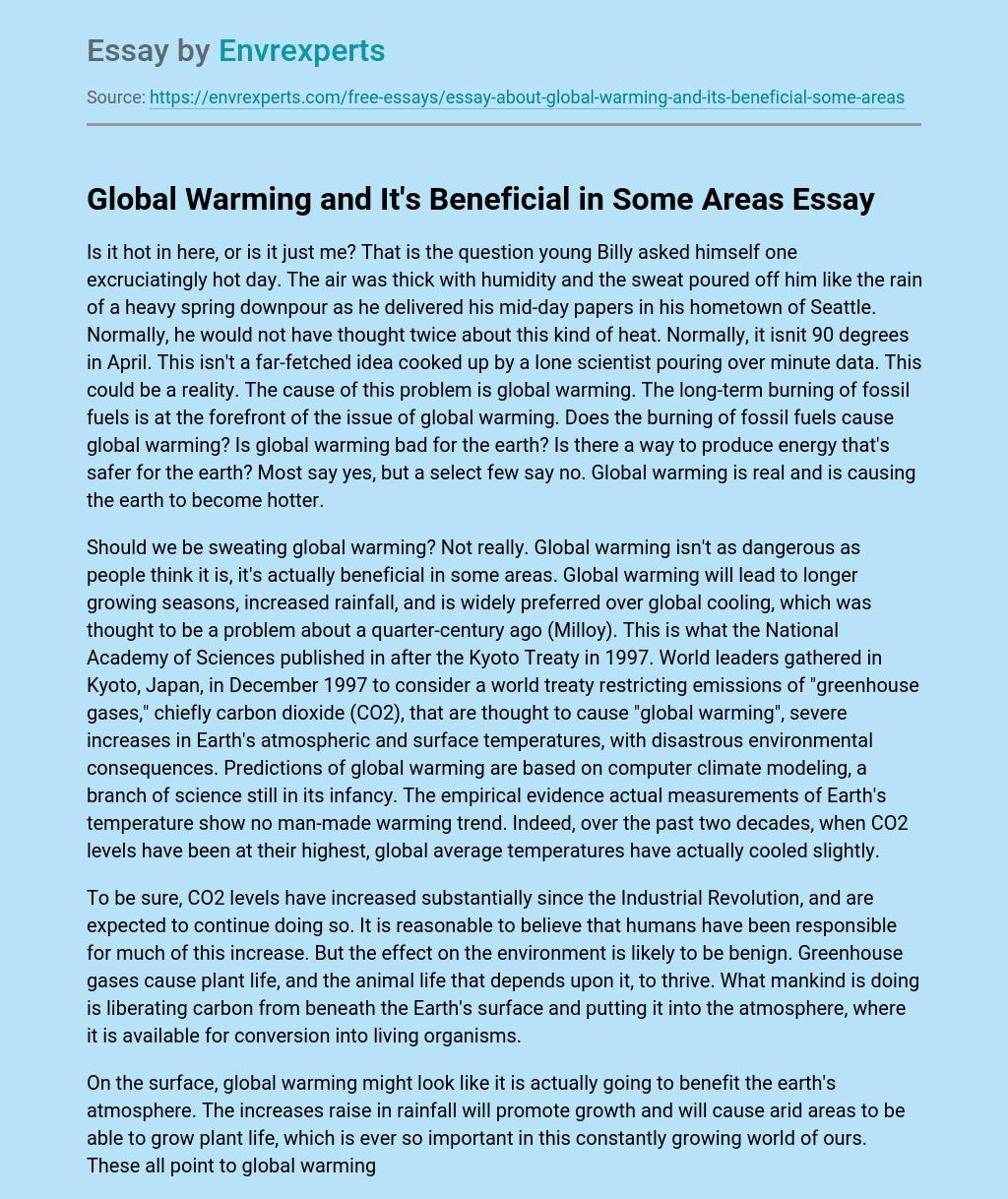