The ocean, and many creatures within it, has been around much longer than humans have, but is suffering greatly because of human actions.

Between industrial waste from factories, sewage and waste water that is chemically treated and then dumped into the ocean, marine dumping of garbage, the burning of fossil fuels, the use of chemical fertilizers and pesticides, and global warming, humans have caused much strife for ocean dwellers. Global warming in particular has rapidly been on the rise and is having terrible ramifications on the ocean.

Don’t waste time
Get a verified writer to help you with Global Warming and Marine Ecosystems
Hire writer
$35.80 for a 2-page paper

It is defined as the “gradual increase in the overall temperature of the earth's atmosphere generally attributed to the greenhouse effect caused by increased levels of carbon dioxide, CFCs, and other pollutants” (Oxford Dictionary, 2018). Global warming is causing changes in oceanic and atmospheric conditions, which in turn is leading to disruptions in marine ecosystems, including the bleaching of coral reefs and the mass migration of fish and other species toward the poles.

Global warming alters the oceanic and atmospheric conditions of Earth. Oceans have increased in temperature, sea levels have risen due to increasing temperatures as glaciers melt and water expands in the heat, and global warming has caused storm patterns to drastically change. With the oceans levels rising and warming, perfect conditions are created for intense tropical storms. “Global warming has caused the atmospheric water vapor content to rise, and as the warm, wet air rises, the storm is fed (USC, 2017)” (McLeod, 2018). These hurricanes carry increasing amounts of precipitation.

Ocean currents are weakening by up to thirty percent in the Atlantic, and if they get much weaker, Europe could go into a deep freeze (Jones, 2016). Oceans are acidifying. “The ocean absorbs about 30% of the CO2 that is released in the atmosphere, and as levels of atmospheric CO2 increase, so do the levels in the ocean. When CO2 is absorbed by seawater, a series of chemical reactions occur resulting in the increased concentration of hydrogen ions. This increase causes the seawater to become more acidic and causes carbonate ions to be relatively less abundant” (National Oceanic and Atmospheric Administration, 2013). Several species are affected by this acidification, such as the pollock, which are unable to detect predators as well in high acidification levels and clownfish, which are unable to find suitable homes (National Oceanic and Atmospheric Administration, 2013).

Coral reefs are crucial to the protection and preservation of the shorelines. They break waves before they get close to the shore, lessening damage from the waves. However due to global warming, coral reefs are being devastated, and therefore are unable to act as the protective mechanism they always have. How does global warming cause this? “[Warmer temperatures cause] thermal stress that contribute to coral bleaching and infectious disease…Sea level rise may lead to increases in sedimentation for reefs located near land-based sources of sediment. Sedimentation runoff can lead to the smothering of coral…Changes in storm patterns lead to stronger storms that can cause the destruction of coral reefs…Changes in precipitation [leads to] increased runoff of fresh water, sediment, and land-based pollutants contribute to algal blooms and cause murky water conditions that reduce light… Altered ocean currents lead to changes in connectivity and temperature regimes that contribute to lack of food for corals and hampers dispersal of coral larvae…[and] ocean acidification causes a reduction in pH levels which decrease coral growth and structural integrity” (National Oceanic and Atmospheric Administration, 2015). In his journal, “Response of a Fringing Reef Coastline to the Direct Impact of a Tropical Cyclone”, Doctor Michael Cuttler of the ARC Centre of Excellence for Coral Reef Studies (Coral CoE) states, “These changes may ultimately increase the amount of wave energy reaching the coastline and potentially enhance coastal erosion” (Cutler, 2018). In addition to protecting the shoreline, coral reefs also the most diverse ecosystems on the planet and are homes to numerous marine species. Coral reefs also “are the source of nitrogen and other essential nutrients for marine food chains” (Queensland Museum). In several locations, coral reefs are main tourist attractions and with the dissipation of these reefs, a significant amount of money is being lost. For example, the Great Barrier Reef attracts upwards of one and a half billion dollars annually due to fishing and tourism.

These changes are also leading to mass migrations of fish and other species, such as the blue crab and the American lobster. This greatly disrupts fisheries worldwide, which is detrimental to the economy and survival of many cities. It will also create sustainability issues for non-migrating fish species. How global warming leads to this? “Fish that normally thrive in the tropics are migrating toward the poles in an effort to find cooler, better-oxygenated water and a much fuller source of food” (Cleanerseas.com, 2016). Many communities globally rely on fisheries as a main source of income and food. 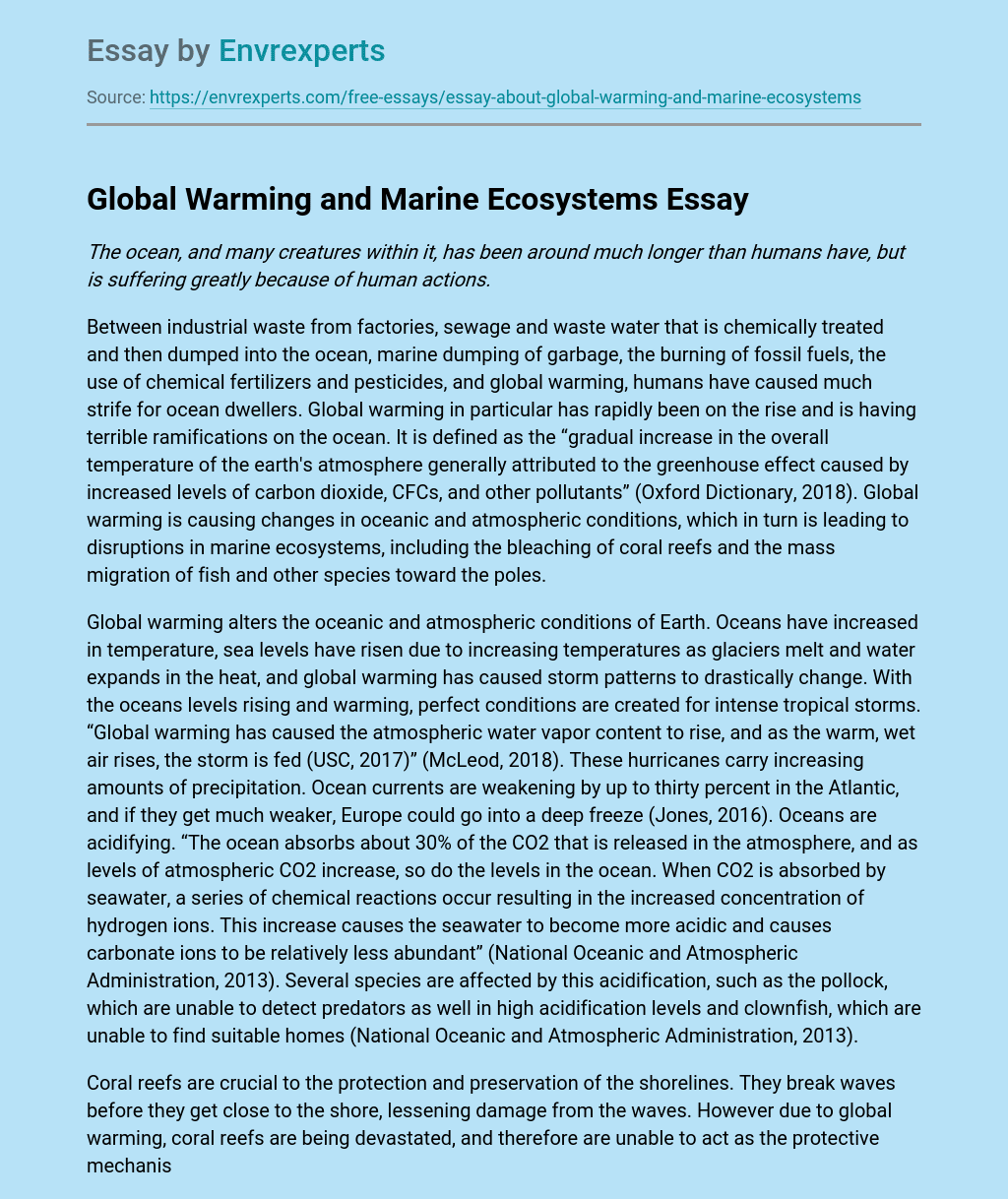