Global Warming and Our Economy

We’ve heard it all before a million times, the earth is warming up, humans are to blame, we burn too much fossil fuels and something needs to change to prevent global warming. But what exactly is global warming? How is it affecting us and what can we really do about it?

What is Global Warming

Don’t waste time
Get a verified writer to help you with Global Warming and Our Economy
Hire writer
$35.80 for a 2-page paper

These gases are released into the atmosphere mainly by the burning of fossil fuels (oil, natural gas and coal), these gasses creates a “layer” of pollution, trapping in the heat, creating a “greenhouse effect” which results in warming temperatures we call global warming.

These gases are mostly made up of carbon dioxide (or CO2), followed by chlorofluorocarbons (or CFCs), methane and nitrous oxide. It is estimated that the burning of fossil fuels produces over 6 gigatons of carbon emissions annually, this is 300% more than what we saw just 30 years ago.

Because of the massive amount of emissions it creates (over 50%) to the global warming phenomenon, and because we know so much about how it is created and the sources it is coming from, CO2 receives much attention from policy makers.

Even though climatologist all agree global warming will continue over the next century, there is much uncertainty about how exactly it will affect us and the magnitude of damages.

Global warming has an effect on all aspects of our world, many of which directly affect our economy. Described below are just some of the effects global warming has on each of these sectors.

Ecosystems-as temperatures rise many species are forced to relocate to more suitable areas. Many species are facing extinction due to global warming. These changes in our natural ecosystems can create alterations in the food change leading to specie endangerment.

Energy -increased temperatures will lead to increased energy use, altering the supply, demand, distribution, efficiency and costs of the energy we use.

Manufacturing-rising temperatures lower the productivity of workers and increases the cost of energy input necessary for production, increasing the overall costs to produce and decreasing our GWP (gross world product).

Retail- the adverse effects on the manufacturing sector created by global warming in turn create a shift in the supply chain which ultimately affects retail and consumer prices.

Tourism-global warming will cause varying effects on the tourism industry. Based on baseline temperatures of each location, the hot and sunny places we like to visit today may become too hot in the future to attract visitors and areas typically considered too cold to attract tourism now may see an increase in tourism down the road- a migration of tourism.

Agriculture, livestock and the food supply- with varying changes in temperature from one location to another, farmers may have to move crops and livestock to more optimal locations or choose to plant different crops that are more suitable to the changing climate of that area. Some cooler areas may see benefits of climate change as they become warmer and more suitable for farming, while others areas may suffer loss if they get too warm and become too hot for farming. It is hard to determine the outcome this will have on our global food supply far into the future.

Forestry-because plants are less adaptable to changes in their environment any changes in temperature, rainfall and weather with surely have an adverse effect.

Fisheries-as CO2 emissions increase globally it changes the pH of the oceans, this change in pH causes acidification, this along with rising water temperatures has lead to severe damage to sea life and aquatic ecosystems.

Water supply- as temperatures increase, snowpack and glaciers melt, sea levels rise causing saltwater intrusion into our fresh water sources, this leads to a decrease in the quality and supply of fresh water.

Coastal zones-as polar ice caps and glaciers continue to melt, over time our sea levels will rise to a level that may lead to a loss of our coastal lands. Because populations tend to be more dense in coastal areas, the effects will be catastrophic, causing loss of lives and mass migrations away from these coastal areas.

Infrastructures- as global temperatures rise, we will continue to see more occurrences of devastating weather patterns. Heavy rainfalls, flooding and hurricanes are a few damaging effects of global warming on our infrastructures.

Because global warming has the ability to affect so many sectors of our economy, and nobody really knows how each will be affected and to what extent, it makes predicting the future world nearly impossible. Climate scientist agree that we will definitely see temperatures continue to rise over the next hundred years, this will certainly bring with it economic hardship, but economist are unable to determine just how much.

It is estimated that if warming continues at recent rates, we could see a decrease in our GDP (gross domestic product) of up to three to six percent by the end of this century and global economic production could be reduced by as much as 23 percent by the year 2100. Again this is very hard for economist to predict with so much uncertainty, but it is assumed that the warmer it gets, the bigger the hit to the economy.

Because global warming has varying effects on different areas of the world, projected impact is dependent on a countries baseline temperatures. Cooler places of the world may see an improvement in their economy as they warm up, while warmer places experience increased energy costs, dying crops and mass migration away from these areas, causing huge damage to their local economies as they get too hot,

Drawing on World Bank Data from 166 countries between 1960 and 2010, Solomon Hsiang, Marshall Burke and Edward Miquel, co-authors of “The Nature Paper” conducted a study and found: “Just like other animals and plants, humans exhibit optimal productivity in a specific band of temperatures. Analyzing 50 years of data from around the world, the team demonstrates that there is an optimal temperature of approximately 13 degrees Celsius or 55 degrees fahrenheit, for economic performance. Above or below this temperature, economies can expect to grow more slowly.” (Maclay, 2).

Based on this information, we can assume that countries that have a baseline temperature below 55 degrees fahrenheit will see an improvement in their economy and economic gain as their temperatures increase closer to the 55 degree benchmark, at the same time, countries that have an existing baseline temperatures above 55 degrees (often the poorer and underdeveloped countries), will see a decline in their economy and a reduction of average income as their temperatures exceed the 55 degree benchmark. This will result in a redistribution of wealth and will further widen global inequality, leaving the cooler countries richer and the hotter countries poorer.

Despite the scientific research and efforts made to model future climate outcomes, global climate “parts” may be too complex to precisely model the “whole”. Even if we were able to estimate outcomes, these estimates would be far from being precise.

If we don’t understand the current effects of global warming, we cannot expect to predict the effects looking far into the future.

Without a full understanding of future climate change outcomes, it is difficult for economists to weigh benefits and costs of mitigating global warming using cost-benefit analysis. In turn, it is nearly impossible to make informed decisions and implement any policies to combat the effects.

In order to apply cost-benefit analysis to establish effective policies it would require placing monetary values on such things as incidence of disease, potential armed conflict, effects of mass migration, human harm and suffering, death and even individual lives.

Even if we could determine a valuation for something like human life, we could not quantify a value for all of humanity. It would be difficult to determine a threshold of how much life is worth risking. We may be able to assess a number of lives worth risking in the name of progress but surely nobody would accept the risk of total human extinction. We must first determine what is “acceptable” risk and then determine how much we are willing to afford to abate said risk.

We do not know the magnitude of the potential impacts, and we know even less about the cost of avoiding them. There may be some impacts that may be inexpensive to avoid, but others prohibitively too expensive to avoid. We know total decarbonization would be way too expensive. Some impacts are unavoidable because the technologies required to abate them are not available. It is difficult to envision what advancements in technology may arise to help people of the future deal with global warming and what the costs will be associated with future technologies. There is also the unknown possibility of future fuel substitutions and alternative energy inputs that might arise that might lessen the problem.

It is also difficult to determine what preventative actions would be worth the effort when there is likely irreversible damage that has already been done.

Currently there is little hope for a world wide policy. Therefore efforts must be made by individual national governments. It is thought that agreements between small groups of counties is better than no agreements at all.

Of all the ideas to reduce CO2 emissions, carbon taxes and tradable permits are the most talked about and most cost-efficient methods both on a national and global level.

Some argue the cost of putting these policies in place, coordinating, policing and monitoring internationally may be prohibitively too expensive to proceed the design of global agreements.

Global Warming and Our Economy. (2021, Oct 31). Retrieved from http://envrexperts.com/free-essays/essay-about-global-warming-and-our-economy 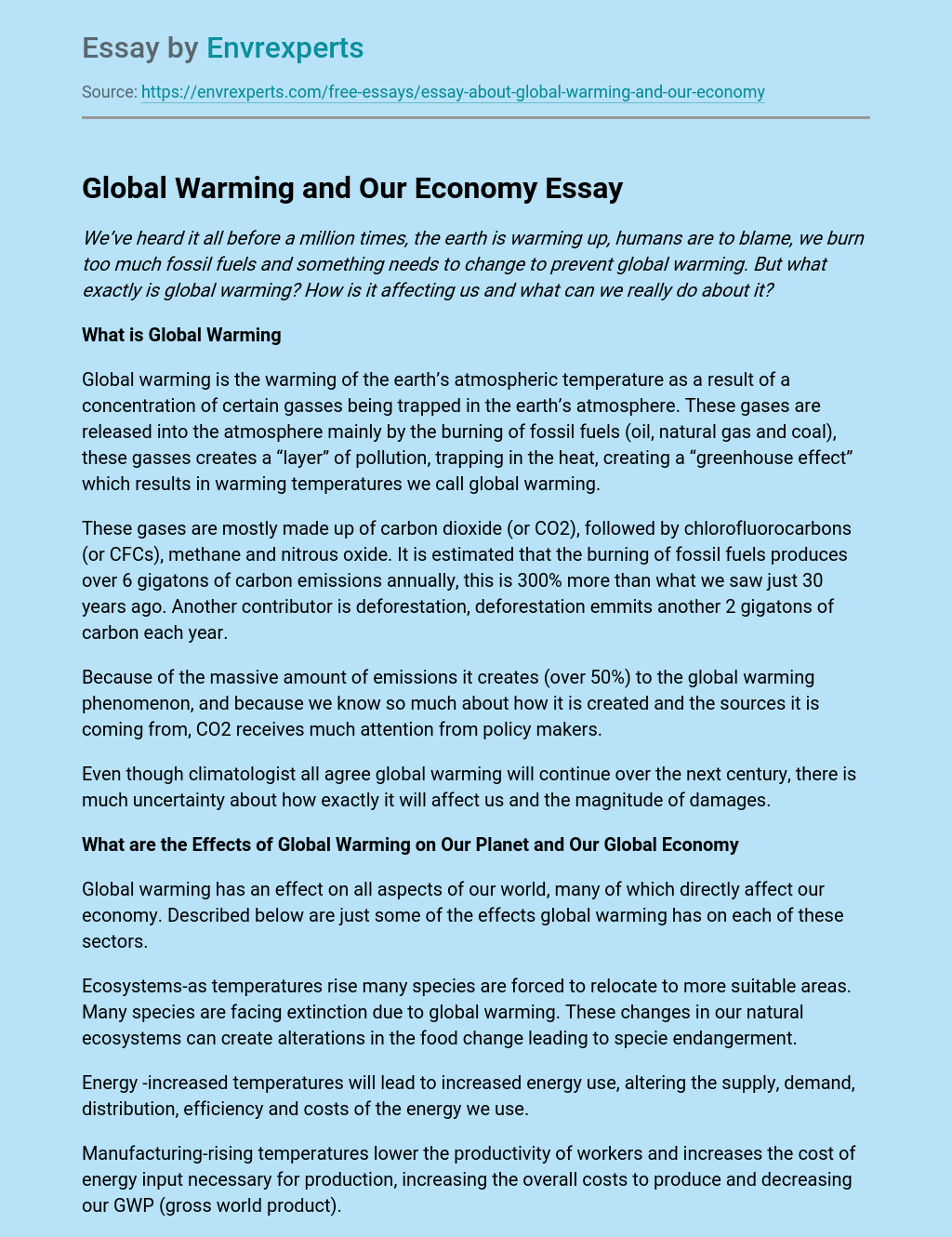