Global warming is slowly breaking our planet a part. From the Arctic rapidly melting to the outbreaks of deadly disease due to the range of which mosquitos can travel increasing. "The four percent of us who live in the U.S. produce a quarter of the world's CO2—we are, quite literally, killing our neighbors, drowning them in rising seas” (3), says American environmentalist and author, Bill McKibben in “Sounding the Alarm Bell.” Without spreading the discoveries and making our concerns on global warming known around the globe and to world leaders, Earth will be left without a chance.

Don’t waste time
Get a verified writer to help you with Global Warming Breaking Our Planet Apart
Hire writer
$35.80 for a 2-page paper

James Hansen, a climatologists and NASA scientist discovered that the proper amount of carbon dioxide in which is appropriate for this planet of civilization is 350 parts per million., placing 350 as the most important number in the world (1). Unfortunately, the air holds around 400.38 parts per million as of November of 2015. “The power of the fossil fuel industry, and the inertia of all of us who are used to things the way they are, are right now too strong.

And that's why we need a movement—a grassroots political movement, in every corner of the planet, among every type of human being” (McKibben 1). The number 350 is our way of shinning light on this ongoing situation to the many linguistic and cultural boundaries.

Soon after James Hansen's discovery became publicly known, Al Gore declared this a political target and that action would be taken, calling for an immense meeting.

A few days later, the 350 campaigned was publically supported by the Dalai Lama. This campaign consisted of 1,500 Buddhists forming the number 350 with a snowy white backdrop, clearly easy to see. Bill McKibben wants more of us to participate in such acts. He believes that the more events people across the world take place in, and the more images of “350” appear, the more likely the world leaders will have that embedded in their mind during the creating of a solution to the carbon in the atmosphere (2). Giving the world a chance.

First off, I agree with McKibben when he states, "global warming, it turns out, is not some future problem” (1). I personally know people who do not believe that global warming is happening. I simply tell them that facts do not lie. James Hansen discovered that we are already past the maximum amount of CO2 that is compatible with this planet, which is responsible for the oceans level and temperature rising, along with many other environmental complications. Last fall, glaciologists found that the Arctic was melting more rapidly than they had seen coming. Now, the Earth has been seen to becoming visibly more blue, and less white from outer space. Global warming is obvious, and it is trying to get our attention.

It is time for us as a planet, not as individual countries, to take a stand and bring awareness to this growing problem. We continue pushing this issue aside, hoping that nature is just working its course. When in reality, we are the source. A statement that grabbed me more than anything else in “Sounding the Alarm,” was “By moving too slowly it would lock the world into an ever-warming future” (McKibben 1). This is exactly what we have been doing and we are continuing to do. A movement needs to take place, eyes need to opened, and voices need to be heard from every person from everywhere. I salute Bill McKibben for gathering people to pull that church bell 350 times in the town of Sherborn, Massachusetts. McKibben was trying to take a stand and make a political announcement. More of us need to find ways to make global warming more public than it is. Sure, many people know it is taking place but so few do something about it. McKibben's way of putting that the abundance of people who don't necessarily not care, but don't care to think about the devastating impact it is causing is very well said… "The power of the fossil fuel industry, and the inertia of all of us who are used to things the way they are, are right now too strong” (1,2).

One of the few presidents who have made it publically known, and actually tried doing something about it was Al Gore. He announced soon after Hansen's discoveries, to fellow diplomats saying “it now needed to be the new goal” (2). Not surprisingly, delegates were satisfied that global warming was being acknowledged. Why did these delegates not say something before? It seems that in order for someone to voice their concerns, someone must do it first. I believe this one of the core reasons why steps to solve global warming is so slow. People do not want to make a big deal about something unless someone else does it first. This is a problem! Speaking up is exactly what we need, bringing more and more attention to the subject. Showing the government how many people want a change and want to help save OUR planet is just what Earth needs.

Another, if you would say, leader, stepped up and did something also. The 350 campaign was advocated by the Dalai Lama. This is the greatest political movement I've read bout having to do with global warming. Fifteen hundred Buddhists formed a human "350," hoping to alert the world with its pictures. It's disheartening to me knowing that in order for our concerns to be seen we have to result in social media. Relying on pictures of rallies is not how such an important environmental issue should be handled. Although, it is what needs to be done. Bill McKibben believes that people need to gather everyone, from small towns to local beaches, city parks to churches, to make a worldwide 350 scene (2). We need to make this number, this problem, so publically known, in the hope that world leaders will start to understand.

The entire world is full of different views. Countries are enemies, fighting day after day. Diversities are against each other, claiming one is superior to the other. In the end, this is OUR planet, what happens to it is our responsibility and will affect us all as living human beings. It is time for a change. It is time for global warming to be taken seriously. It is time for us to start doing our part, explain to others what lies behind the number "350." 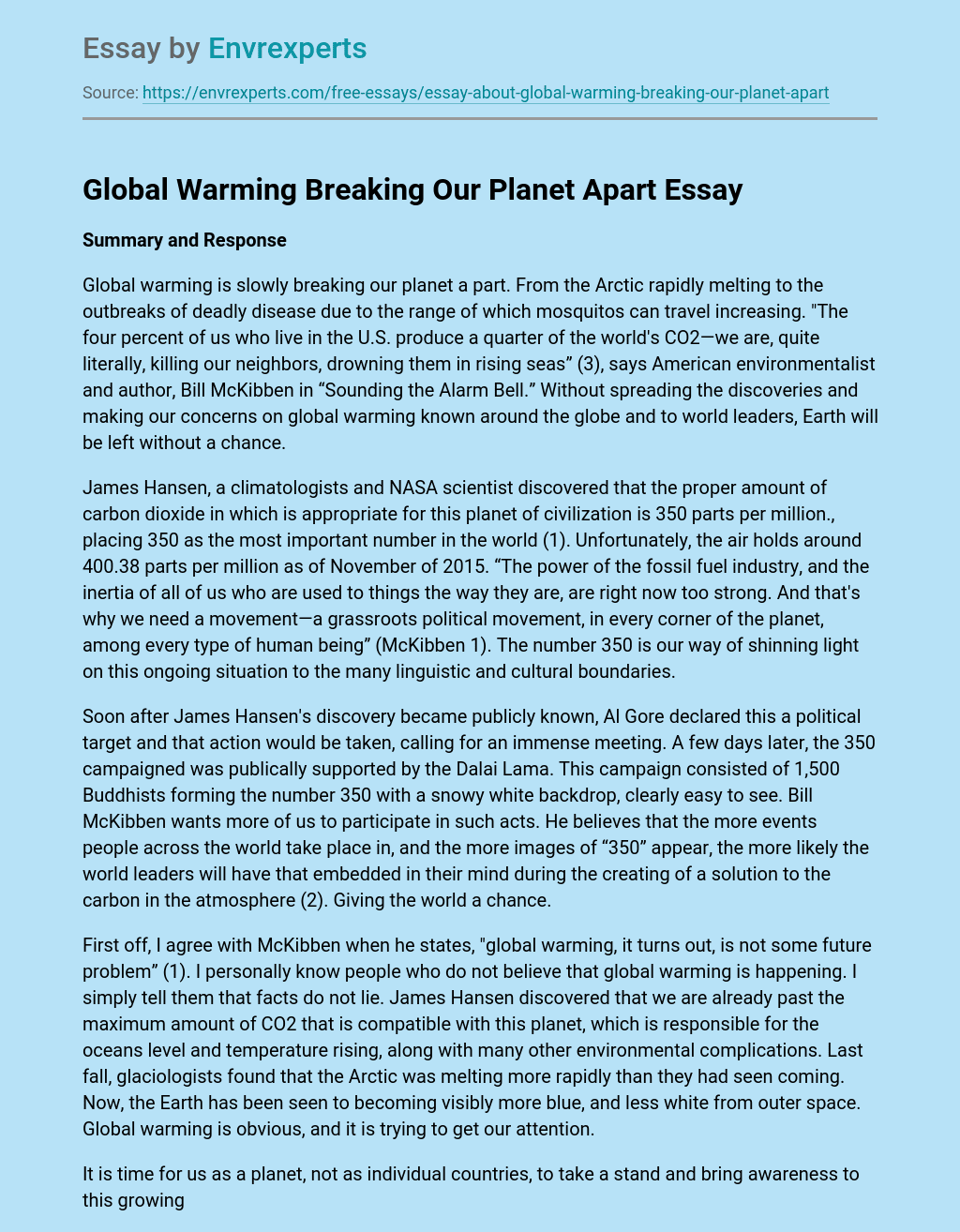