Global Warming is a Myth

Would you bet your paycheck on a weather forecast for tomorrow? There have been several claims that global warming is happening and that our glaciers will disappear soon. Global warming is a hoax and a made-up problem; there has been no sufficient scientific proof that this phenomenon is real.

The Intergovernmental Panel on Climate change (IPCC), the international body for climate change assessment who is responsible for gathering all relevant information on climate change, wrongly predicted the disappearance of Himalayan glaciers by 2035.

Don’t waste time
Get a verified writer to help you with Global Warming is a Myth
Hire writer
$35.80 for a 2-page paper

This wrong report raised a lot of questions and doubt about the integrity and authority of this highest-level authority on global warming and climate change. If the peer reviews by scholars and scientists had not pointed out the errors in the report of the IPCC, it would have been accepted to be true indeed. The IPCC issued out a statement of apology concerning the wrong predictions they made about the disappearance of Himalayan glaciers by year 2035 because they did not have adequate scientific data to prove that the claim was right.

Climate change is nothing, but a myth and a hype put forth by environmentalists and politicians to limit personal freedom and spend trillions of tax payer’s dollars on this made-up problem. There has been no adequate proven scientific data to support these alarming claims by politicians, climatologists, environmentalists and certain world leaders with an agenda to mislead the mass populace for financial gain. There have been several publications in the news media and various social platforms like Facebook, twitter, Instagram, among others, that global warming is a real problem.

“There have also been several propagandas that global warming is happening and accelerating, which in retrospect, is causing warmer seas, rising sea levels and changing weather conditions like less rain in some places, more floods, melting glaciers and greenhouse effect, among others” (Kosolosky, Laszlo).

Furthermore, there have also been quite a number of apocalyptic predictions that the world is about to end because of climate change. These arguments are majorly wrong and a means to limit people’s personal freedom, and waste tax payer’s dollars through carbon taxes. Carbon taxes are fee imposed on the burning of carbon- based fuels (coal, oil, gas); these carbon taxes have extensively placed extra cost on production and manufacturing of goods and services. There has been no proven data that point to the issue of global warming being real or that the world is in immense or imminent danger. The Earth has a natural climate cycle.

The world climates go through natural cycles of warming and cooling; there have been ice ages and warmer interglacial periods over eight hundred thousand years. The issue of warmer temperature has been a recurring phenomenon over thousands of years. It is not a new occurrence but rather a natural Earth cycle. For instance, “the European Space Agency, states that in 2013 and 2014, after years when the volume of arctic ice had been diminishing, it increased again by as much as 33 percent (Kosolosky, Laszlo). There is no unified agreement among scientists that global warming is happening. About 33,000 scientists says that there is no convincing evidence that global warming and climate change is real.

According to a petition poll coordinated and compiled by the Oregon Institute of Science and Medicine, it shows that there is no consensus among scientists about global warming and climate change. As the saying goes, there is strength in numbers, that is the more scientifically qualified people that agree on the issue will prove the authenticity of it. There is an ongoing debate among politicians, celebrities, organization, environmentalists and media houses. There have been so many debates going on about the issue of global warming and climate change, and several public figures ranging from politicians, environmentalist, celebrities and media houses have voiced out their beliefs about global warming. Quite a large number of these views actually reinstate that global warming is a hoax, “Many of the alarmists on global warming, they’ve got a problem because the science does not back them up,” the climate information being promoted by these groups’ meteorologists and others are an effort to promote climate change fears in people because these claims have no sufficient scientific data (Ted Cruz).

Also, the media houses and social media have employed the use of repetition to promote the climate change myth; they have used repetition to counter reality. Furthermore, environmentalists and climatologists have benefited immensely from federal funding by hyping climate change. It is an agenda by politicians and world leaders to limit people’s freedom and waste resources. So many politicians and world leaders have used climate change as a way to regulate our lives, waste resources and tax payer’s dollars with the imposition of new laws and regulations on individuals and companies as to management and disposal of industrial waste. The extra limitations and restrictions imposed generate panic, fear, and extra production costs on people and goods and services, thereby increasing the cost of living in the country.

Most of the federal funding that goes into global warming and climate change actually shortchanges some other life-improving projects like education, healthcare and others. Computer climate-based models are inaccurate and unreliable. Models are not real representations of reality or actual events, they are a way of constructing a picture to show how something works. Climate models are mathematical representations of the interaction between the atmosphere, oceans, land surface, ice, and the sun; they can estimate trends rather than actual occurrence. For instance, climate models can tell us that it will be very hot in this year’s summer, but it cannot give the actual temperature on a specific day. In the final analysis, if we are not willing to bet our paycheck on a weather forecast for tomorrow, why should our country bet billions of tax payer’s dollar on global warming predictions that have even less foundation. Up till today, there has been no proven scientific data backing up the alarming claims about global warming and climate change; it is a myth that has been given undue public attention as a result of publications by biased and fake media.

Furthermore, the climate-based models are simulations, they are not real data and consequently, everything we’ve heard about climate change in the past, present and future have been through models which cannot be relied on. In addition, the hype about global warming has always been an effort to drain public funds and waste tax payer’s money; it is also a fearmongering effort to sabotage people freedom. Unison and consensus by scientists and authoritative body responsible for compiling data on climate change would be the first step in the right direction by these alarmists towards gathering data sufficient to argue their points on global warming.

Global Warming is a Myth. (2021, Oct 31). Retrieved from http://envrexperts.com/free-essays/essay-about-global-warming-myth 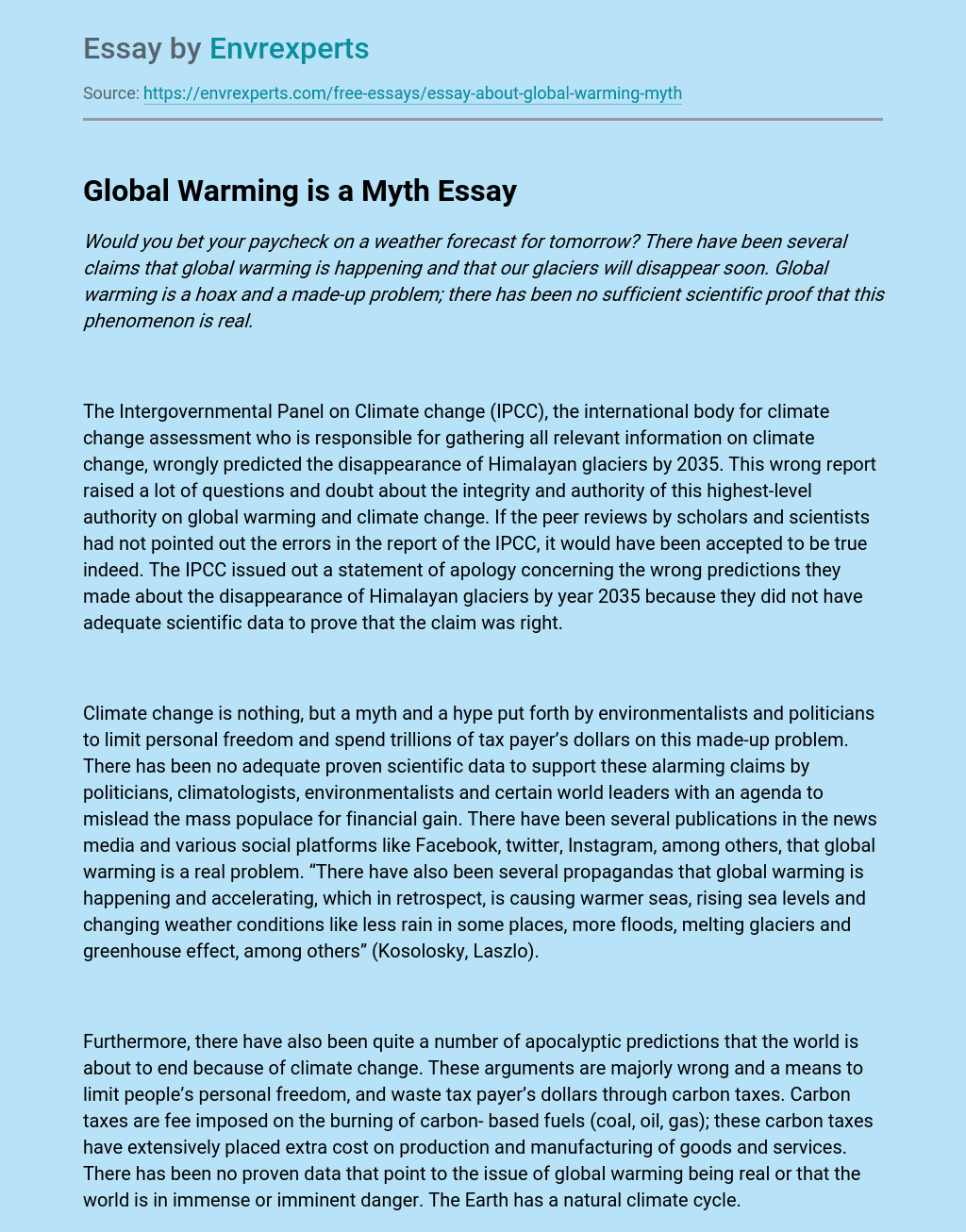