Global Warming As A Serious Problem

The atmosphere lets in heat that warms our Earth. These rays from the sun are let in and reach the Earth's surface to heat it.

Don’t waste time
Get a verified writer to help you with Global Warming As A Serious Problem
Hire writer
$35.80 for a 2-page paper

When these infrared rays are trapped in the Earth's atmosphere they cause the temperature to rise to levels that they wouldn't normally be at. This process is essential though because without this "greenhouse" action The Earth's temperature would be about -100 degrees farenhight. This process is needed to keep heat in our atmosphere. Unfortunately, the opposite of this example is also bad for our Earth.

An atmosphere that takes in too much heat from the sun will have negative effects. Venus is a perfect example of how a planet can take in too much heat. This planet's heat levels can reach up to 932 degrees farenhight. As you can see there is an intricate balance between having too much heat, and not enough.

The earth's climate is predicted to change because human activities are altering the chemical composition of the atmosphere. There is a great build up of greenhouse gases such as primarily carbon dioxide, methane, and nitrous oxide.

The heat-trapping property of these gases is undisputed. Although uncertainty exists about exactly how earth's climate responds to these gases, global temperatures are rising.

Energy from the sun drives the earth's weather and climate, and heats the earth's surface; in turn, the earth radiates energy back into space. Atmospheric greenhouse gases such as water vapor, carbon dioxide, and other gases, trap some of the outgoing energy, retaining heat like the glass panels of a greenhouse. Without this natural "greenhouse effect," temperatures would be much lower than they are now, and life as known today would not be possible. Instead, thanks to greenhouse gases, the earth's average temperature is a more hospitable 60.F. However, problems may arise when the atmospheric concentration of greenhouse gases increases.

Since the beginning of the industrial revolution, atmospheric concentrations of carbon dioxide have increased nearly thirty percent, methane concentrations have more than doubled, and nitrous oxide concentrations have risen by about fifteen percent. These increases have increased the heat-trapping capability of the earth's atmosphere. Sulfate aerosols, cool the atmosphere by reflecting light back into space, however, sulfates are short-lived in the atmosphere and vary regionally. Scientists generally believe that the combustion of fossil fuels and other human activities are the primary reason for the increased concentration of carbon dioxide. Plant respiration and the decomposition of organic matter release more than 10 times the carbon dioxide released by human activities; but these releases have always been in balance with the carbon dioxide absorbed by plant photosynthesis. What has changed in the last few hundred years is the additional release of carbon dioxide by human activities. Energy burned to run cars and trucks, heat homes and businesses, and power factories is responsible for about eighty percent of society's carbon dioxide emissions, about twenty-five percent of U.S. methane emissions, and about twenty percent of global nitrous oxide emissions. Increased agriculture, deforestation, landfills, industrial production, and mining also contribute a significant share of emissions. In 1994, the United States emitted about one-fifth of total global greenhouse gases. Estimating future emissions is difficult, because it depends on demographic, economic, technological, policy, and institutional developments. Several emissions scenarios have been developed based on differing projections of these factors. For example, by the year 2100, in the absence of emissions control policies, carbon dioxide concentrations are projected to be 30-150% higher than today's levels.

The global mean surface temperatures have increased 0.6-1.2.F since the late 19th century. The ten warmest years in this century all have occurred in the last fifteen years. Of these, 1998 was the warmest year on record. The snow cover in the Northern Hemisphere and floating ice in the Arctic Ocean has decreased. Globally, sea level has risen 4-10 inches over the past century. (encarta reference suit.com) Worldwide precipitation over land has increased by about one percent. The frequency of rainfall has increased throughout much of the United States.

Increasing concentrations of greenhouse gases are likely to accelerate the rate of climate change. Scientists expect that the average global surface temperature could rise 1.6-6.3.F by 2100, with significant regional variation. Evaporation will increase as the climate warms, which will increase average global precipitation. Soil moisture is likely to decline in many regions, and intense rainstorms are likely to become more frequent. Sea level is likely to rise two feet along most of the U.S. coast. Calculations of climate change for specific areas are much less reliable than global ones, and it is unclear whether regional climate will become more variable.

Today, action is being taken at every level to reduce, to avoid, and to better understand the risks associated with climate change. Many cities and states across the country have prepared greenhouse gas inventories, and many are actively pursuing programs and policies that will result in greenhouse gas emission reductions.

At the national level, the U.S. Global Change Research Program (USGCRP) coordinates the world's most extensive research effort on climate change. In addition, the Clinton Administration is actively engaging the private sector, states, and local governments in partnerships based on a win-win philosophy and aimed at addressing the challenge of global warming while, at the same time, strengthening the economy.

At the global level, countries around the world have expressed a firm commitment to strengthening international responses to the risks of climate change. The U.S. is working to strengthen international action and broaden participation under the Framework Convention on Climate Change. (britainnica.com)

In conclusion, global warming is a very big problem in our society today. There is a very acute balance that cannot be upset in our Earth. The government and activist groups are doing things to help this problem but more effort needs to be put in. Even the average American can help. People could write letters to congressmen or other political figures involved in governmental issues. You can also get involved yourself. Joining groups that promote the safety of our climate can help. Standing up for the protection of our environment will help our Earth in many ways.

Global Warming As A Serious Problem. (2021, Oct 31). Retrieved from http://envrexperts.com/free-essays/essay-about-global-warming-serious-problem 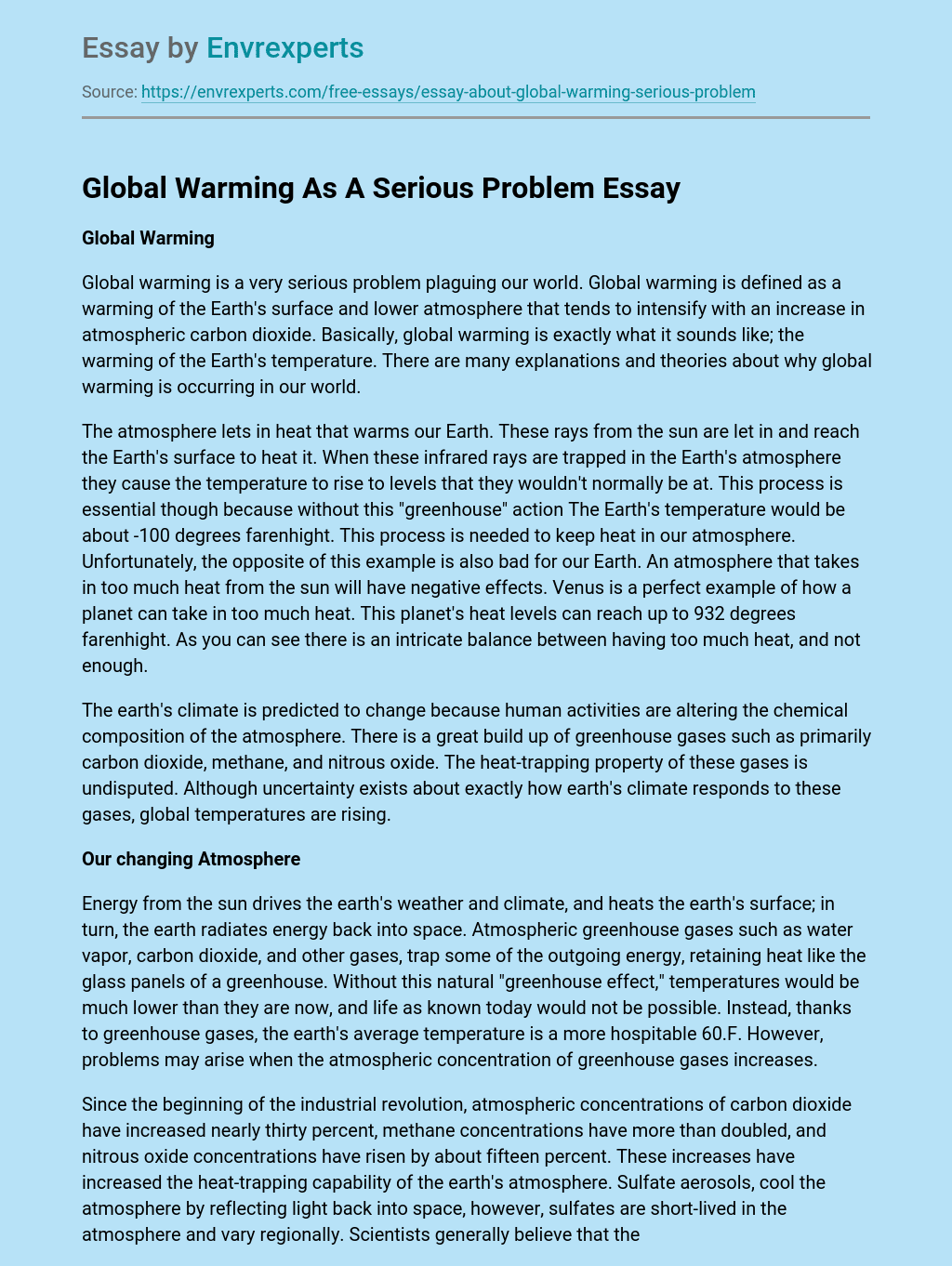