Globalization and Its Consequences

The second feature of states is population. Most of states have permanent of population. Those peoples in states called as citizens. In other words, a population may refer to a whole community of individuals, things, activities, visits to hospitals, or measurements. It also can be said that a population is an collective observation of subjects bound together by a common function. For example, if we know a town\'s specific population we can estimate the number of resources it needs. We can do the same with wildlife, too.

Don’t waste time
Get a verified writer to help you with Globalization and Its Consequences
Hire writer
$35.80 for a 2-page paper

Looking at the human race, we see how this is a source of concern. For example, Selangor population stood at about 6.53 million as of the second quarter of 2019. Selangor is the most populous state in Malaysia. Besides that, population impacts are also present in all states . For example, the growth of the human population is impacting not just humans but also our environment and all of animals. Some or all of animal species go extinct due to various causes.

When more people needs more land, deforestation is taking place at a faster pace that takes away these animals\' homes. With the same meaning which is all of human activities are destroying their habitat.

The fourth feature of state is sovereign. Which mean that’s, according to theory, all states are free from outside intervention in their domestic affairs. In other meaning, sovereign is a state with its own permanent population, territory, and government agencies and communities. It also requires the right and capacity to conclude treaties and other agreements with other nations.

Actually, a sovereign state is a self-governing territorial body with jurisdiction of its own internal autonomy and well-defined boundaries. External autonomy is the capacity to spread the power of the state outside its frontiers and on the world stage. In other words, with the growth of regionalism and internationalism in recent years, it may be claimed that the internal and external autonomy of states has been undermined because they are kept to account by another body that is greater than them.

For example, all the states took this matter very seriously because in global politics, they always complain that another state or anybody else are making something that is interfering in their country\'s internal affairs. This will make the states feels sad or upset due to they find that their authority is being abused. Actually, sovereign states and nation states are actually difference meaning.

So, nation states is a self-governing governmental body which is both a country and a cultural body. \nThe fifth feature of state is recognition. Recognition means by states is they recognized or known by each other. But, not every state recognized with each other as political and legal entities and that can take as issues in global politics. For example, in state A and state B, they were recognized each other states so they knew that both of the states was known as political and legal entities. However, there is no requirement on one state to accept another, even though those requirements are met. Recognition standards also can have a conflict from state to state.

It is happened only when the organization is recognized as a state can it be accepted by other states and are a part of the International Community. The act of acknowledgment is considered under international law as an autonomous function of the current culture of statehood. There are 2 theories about recognition which is consecutive and declaratory theory. Consecutive theory is the order for a state to be deemed an foreign individual, its acceptance as a monarch is necessary by the established states.

Declaratory theory is the new state that is capable of the approval of established states. It’s means that the presence of a new State does not depend on the current State for being recognized. So, this is a disagreement among different jurists between Consecutive Theory and Declaratory Theory of recognition, however we may infer that this theory is for recognition is between consecutive and declaratory theory.

According to Thomas Hobbes argued for a strong state, he said that to overcome the state of nature in which life is solitary, poor, nasty, brutish, and short. Thomas Hobbes argued that as human beings left to their own devices would indulge in perpetual confrontation in their quest for survival. For Hobbes therefore, every regime capable of monopolizing the use of force was better than none. Monopoly on the use of force is not only have the authority to kill or murder or imprison but it is the best way to keep the citizens to follow the rules to keep them in safe environment or cities. \nIn addition, modern international politics is about international policy should not be confused with global politics which, in addition to governments, integrates the positions of global interest groups and corporations.

Actually, with this argument indicates that it is not the politics of nations but above all, the division of countries in the global political structure. International political is actually involve issues the diverse priorities of countries, as well as the inequality of resources, influence and human rights. With this aspect of foreign relations, with the help of which is all the sovereign nations are trying to insure their stability and accomplish several objectives and sometimes it can be difficult that can be caused conflict is the most critical component.

For examples, what if in our states doesn’t have any law enforcement and that the only law is agreements between individuals and self-help of enforcement. Which means, all of our states and countries need law to protect our countries and for our own safety. International relations actually involved the study of foreign policy, international conflict and negotiation, war, terrorism, international trade and economics. \nIn conclusion, all the 6 characteristics of states which are border, populations, central government, sovereign, monopoly on the use of force.

All this characteristics are very important to roles in our global politics. The states is very important because the rules is to maintain our laws and orders, to safeguards people\'s rights and liberties, it controls people\'s behaviours and to maintains the citizens lived in harmonies.

Globalization and Its Consequences. (2021, Oct 31). Retrieved from http://envrexperts.com/free-essays/essay-about-globalization-and-its-consequences 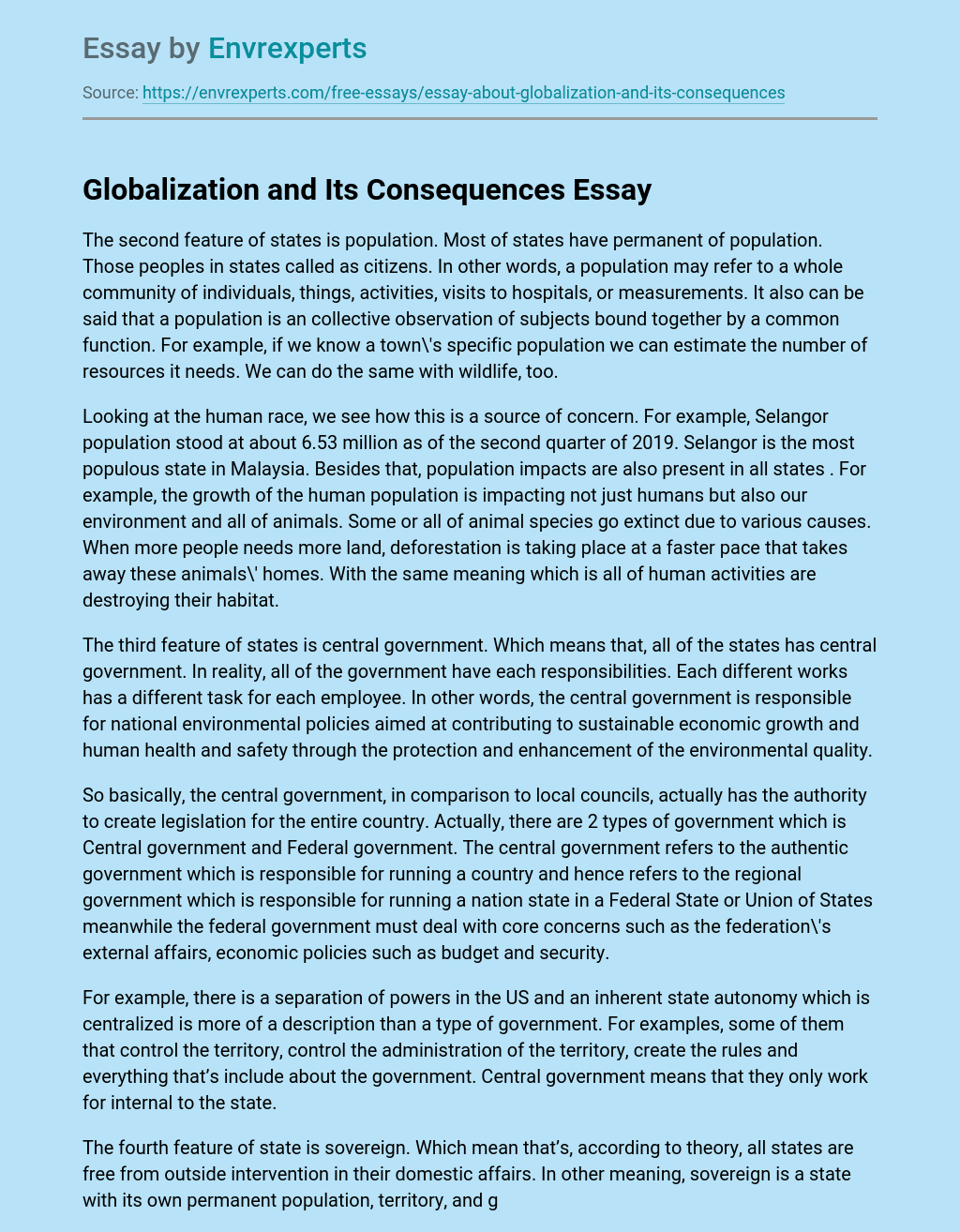