Tropical rainforests have more kinds of trees, insects, animals, and other types of vegetation than any other forests in the world. Aside from being the single largest generators of oxygen, they offer an innumerable amount of foods, shelter, and other raw materials that we use everyday. Some rainforest trees like mahoganies, teaks, rosewoods and okoumes provide valuable timber, while other rainforest products are nuts, fruits, rubber and rattans (Foster).

In accordance with the growth of human population, rainforests have suffered several repercussions.

Don’t waste time
Get a verified writer to help you with Gold Mining in the Amazon Tropical Rainforest Region
Hire writer
$35.80 for a 2-page paper

Each year, thousands upon thousands of rainforests are being destroyed. For example, Rainforests are being destroyed for their timber by logging companies and cleared by people for farming. However, the most widely debated issue facing this rainforest is gold production, which has become a major source of income for several countries of the Amazon region, especially Brazil which has become the fourth largest producer in the world (amazonteam.com). The primary concern of the industry is mercury pollution that goes hand in hand with current mining techniques.

The environmental effects of the mercury are serious, and there are significant dangers to the health of the human population of the region. Other factors involved in the case are human rights and the level of discretion that the Indians are entitled to in the use of the resources on their reservations. There is also the sovereign right of Brazil to develop the Amazon as they wish. This is in direct opposition to the prevailing viewpoint of international environmental organizations, which regard the Amazon as a world resource (Foster).

Gold mining of surface deposits began in the Amazon region as early as the 16th century in the more easily accessible locations near the coasts and major rivers. However, difficulties resulting from location, climate, and political instability kept the region from full exploration of its resources until recently. In the late 1970s, gold was discovered along the Brazilian border with Venezuela. This sparked off the largest single gold rush in history, which is still going on today (Foster).

Currently, Brazil is the worlds fourth largest producer of gold and the other countries of the region have begun to increase their investment in discovering and utilizing gold resources. This expansion of development into the Amazon region has met considerable criticism from environmentalists throughout the world, who regard the Amazon as a world resource that needs to be preserved. This preservation is regarded as vital because the Amazon is believed to contain over half of the worlds plant and animal species and fully one third of the worlds trees. Additionally, 20 percent of the fresh water entering the oceans comes from the Amazon. Two thirds of the 2.7 million square mile extent of the Amazon basin is within Brazils borders, making actions in Brazil of paramount importance to the status and future of the region (amazonteam.com).

The actual dispute is over the effects of the gold mining process on the Amazon, specifically the mercury used to isolate the gold from the surrounding sediment. The amount of mercury entering the environment from gold mining activities is estimated to be 200 tons last year alone (amazonteam.com). Mercury enters the environment during each of the steps involved in acquiring the gold and separating it from the rest of the material. Considerable amounts of mercury are left in the gold depleted soil and enters the environment when this material is separated.

A major step has been taken in the direction of recovery in that Brazil has received a $17 million grant from Germany for the purpose of studying the problem of mercury poisoning and possible solutions (amazonteam.com). Also, Brazil has invested heavily in the development and production of the closed retort, the tool used by the miners to separate the gold from the mercury. Even though this problem is potentially very great there is little likelihood of rapid action towards its resolution as there are vested interests in the gold mining operations which are actively opposed to change and the people being affected by the mercury contamination have little political pull. Finally, as demonstrated by the attempt to limit the access to mercury, even if Brazil does muster the political will to pass legislation, there is no vehicle for enforcement of the laws due to lack of funding. That is the sad truth facing this rainforest today. I am left to wonder, if someone doesnt act nowwhat is to become of one of the most intriguing and unique entities that nature has to offer? 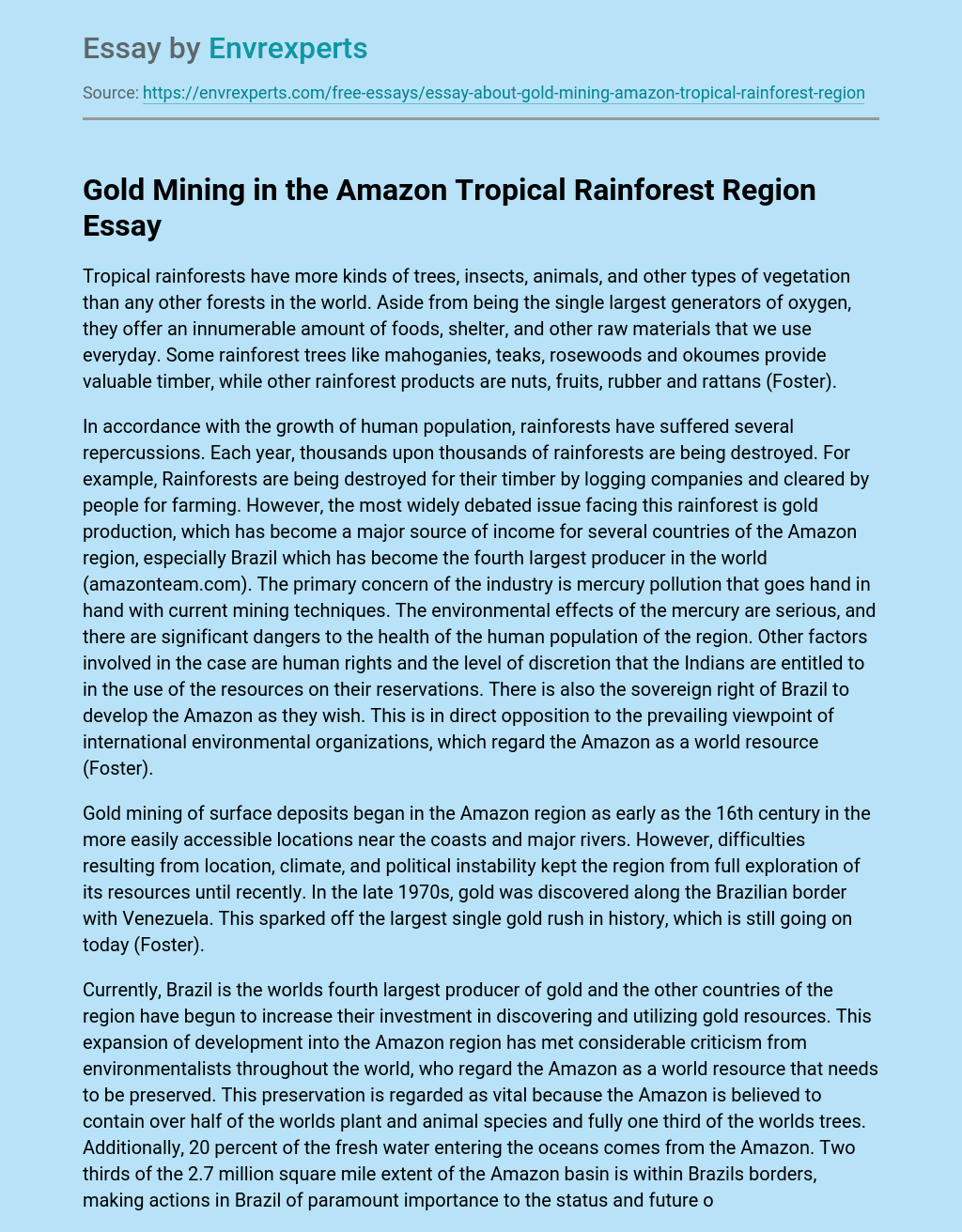