A Good Waste Management System Is Needed to Protect the Environment

How is it possible for individuals to produce so much waste without intending to do so, or even realizing they are doing it? Where does our garbage go? (Garbology). In our present time, due to increasing number of population, waste production has gone into its peek that we ourselves may not know where to put them. It is a growing concern for all of us, not just in San Francisco but also around the world. Waste management systems typically refer to a specific technique, strategy, or device used to treat waste materials.

Don’t waste time
Get a verified writer to help you with A Good Waste Management System Is Needed to Protect the Environment
Hire writer
$35.80 for a 2-page paper

This may include the collection, transportation, recycling, disposal, or processing of waste. In general, waste management systems attempt to curb waste for reasons such as public health threats, environmental concerns, or the general appearance of a location. With the increasing number of population and industrialization, alternatives available for disposing of waste in a suitable manner, such as composting, recycling, managing landfills and burning waste has to be considered.

Today, the term waste generally entails an unwanted or unusable material that is deliberately discarded by its users.

Classifications of different types of waste include human waste, industrial waste, hazardous waste, or biodegradable waste. Specific definitions of waste have been written into law by organizations such as the United Nations (UN) and the European Union (EU), in order to effectively classify waste and minimize the environmental, social, or economic negatives that the neglect of waste management may cause.

Waste management systems vary according to social, cultural, and technological norms. In industrialized countries, there typically are standard strategies for the treatment of waste.

Waste management systems such as landfills attempt to bury waste underground or separate waste within the confines of an enclosed area. For instance, Humes, author of the book named Garbology mentioned Big Mike, a worker that condenses, mold and squeeze “The mountain of rubbish at the Puente Hills Landfill in Los Angeles, the largest of the 1,900 municipal landfills in America, is over 500-feet high—taller than most of the skyscrapers in the city's downtown area to the west”. Big Mike builds a proper trash mountain, though its difficult, edgy and dangerous. He then crushes and compresses the garbage, and cover it with dirt which makes the landfill a sanitary landfill, though landfills cannot expand infinitely and can cause serious environmental damage to air, water, and soil. Incineration burns waste material using high temperatures, and can also be used to convert the combusted waste into usable energy sources. For instance, Humes mentioned, “With 60 years' worth of decomposing rubbish, Puente Hills produces enough methane to generate electricity for 70,000 homes”. This process called waste-to-energy could generate electricity and it’s a renewable energy because its fuel source, garbage, is sustainable and is not depleted.

Recycling is a common waste management strategy. It can be used for both environmental and social benefits. Gunther, author of the article “The End of Garbage” states that “Today San Francisco has a recycling rate of 68%, the best of any American city, and it intends to do better. Much better. San Francisco and Wal-Mart do not have much in common, but there is this: Both have a goal of achieving zero waste”. As we can see, private sectors and the city itself have the same goals to achieve zero waste. A recycling waste management system may be as simple as specifically marked bins intended for disposal of recyclable materials. These colored bins commonly are found in most Western countries.

A waste management system also can be conceived as a strategy for avoiding or reducing wastes. Sullivan, author of the article “Zero Waste in San Francisco horizon” states that in San Francisco, both composting and recycling became mandatory in 2009. “The three-stream sorting system [– compost, recycling, and trash for landfill/incineration –] had been developed in pilot programs and voluntary systems in San Francisco for more than a decade. The work was motivated by two main goals: by 2010 to achieve 75% diversion from landfills, and by 2020 to achieve zero waste – that is, no use of landfill or incineration”. These types of systems are preventative and look to control the production of waste. Legal restrictions may limit the industrial production of waste by factories. Sullivan states in his article, “By law no one may mix recyclables, compostable, or trash, or deposit refuse of one type in a collection container designated for another type. There is extensive and free support from the city for these goals, through public and private sectors; for example, training, education, and signage”. The introduction into the public consciousness of ecologically beneficially behaviors in order to produce a greener world also is an example of a waste management system, such as the phrase, "reduce, reuse, and recycle."

Hazardous waste requires its own specific waste management systems according to the potential public and environmental health dangers they may cause. Cote, author of the article “S.F. composting, recycling, becomes law Wednesday” states that Hazardous wastes come in all shapes and forms. “They may be liquids, solids, or sludge. They may be the by-products of manufacturing processes or simply commercial products that have been discarded”. Whatever their form, proper management and disposal of hazardous waste is essential to protect the environment. These waste management systems are relative to the type of hazardous waste being treated. They incorporate concepts such as incinerators or recycling for clean up.

Man has evolved from ancient times and since then has continually developed its intelligence in handling not only itself in relation with the community but also with Mother Nature.  With the development of systems and technology and human nature’s capacity to continuously evolve with it, it is but natural that man is able to rise above the problem of overpopulation, and its consequent increase in production of waste.  It is but natural that man continuously find ways and means to solve problems that go with it such as the increasing production of waste and the community’s inability to sort through the quagmire of its resultant negative effects.

The government has stepped up to its role by supporting efforts to address early effects of uncontrolled waste production.  But its efforts are in vain had not the private sector spearheaded a not so acceptable concept at the time, of waste management.  However, had these private sector not persisted in their efforts and goal to address the increasing waste production in the city, such as here in San Francisco, there would not have been any successful pilot program that is now currently being replicated all over the world.  From a germ of an idea, alternatives available for disposing of waste in a suitable manner, such as composting, recycling, managing landfills and burning waste to address future problems not just in San Francisco but also in key cities of the world. The key factor here is continuous involvement of everyone in the community – man, government and the private sector.  No success in any endeavor will be achieved singlehandedly, unless there is support from all sectors of the society.

A Good Waste Management System Is Needed to Protect the Environment. (2021, Oct 31). Retrieved from http://envrexperts.com/free-essays/essay-about-good-waste-management-system-needed-protect-environment 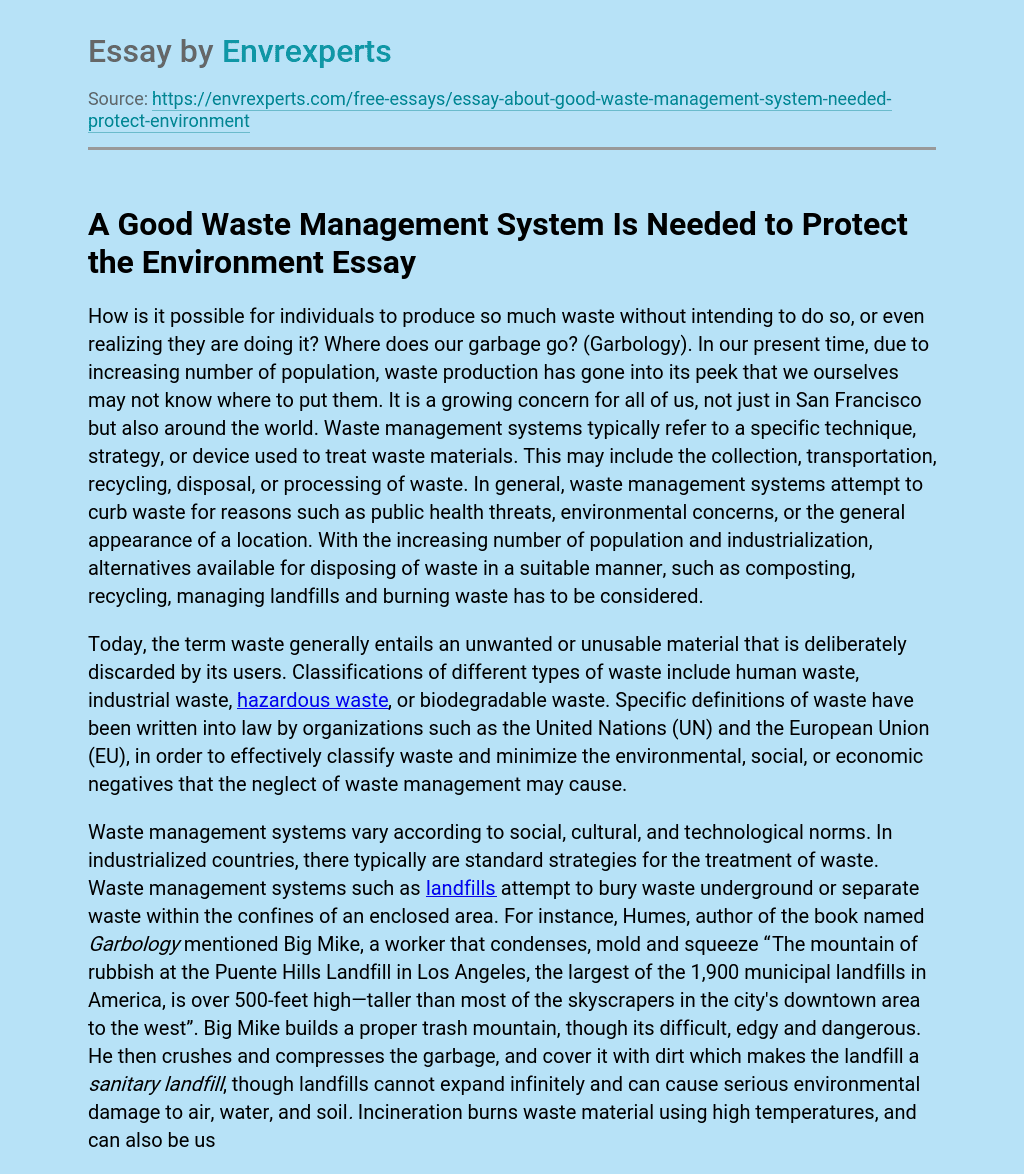