In 100-250 words, explain each element, and discuss how it affects or influences the U.S. political system.
Civil servants Also known as bureaucrats, civil servants are the nonelected workers who make up the federal bureaucracy. They fill positions across all levels of government, and rely on specialized skills to collectively carry out the various functions of government. Civil servants are hired, and in some cases appointed, to work in the public sector on behalf of the government.

Don’t waste time
Get a verified writer to help you with Government Regulation of Environment Protection Issue
Hire writer
$35.80 for a 2-page paper

There are three levels of civil service: competitive service, excepted service, and senior executive service. Examples of competitive service, which are positions based on merit, include postal workers, military personnel, clerical workers, and social workers. Exceptive service positions, such as those in the Central Intelligence Agency (CIA) or Nuclear Regulatory Commission, are exempt from the merit-based hiring process. Finally, executive service positions are also exempt from the merit-based hiring process, and are reserved for those who are qualified for leadership positions in the federal government agencies (Krutz, 2017).

The 15 cabinet departments in the federal government include the Departments of State, Defense, Treasury, Education, Justice, Interior, Agriculture, Commerce, Labor, Health and Human Services, Housing and Urban Development, Transportation, Energy, Veterans Affairs, and Homeland Security. Each department has a head called a secretary, who answers directly to the president. The Department of Justice is the lone department that is headed by the attorney general instead of a secretary. Each cabinet department has specific responsibilities, which are delegated down to a number of undersecretaries, essential staff, smaller offices, and bureaus, through a hierarchical structure. Heads of the cabinet departments are nominated by the president and confirmed by a majority vote in the Senate (Krutz, 2017).

Regulatory agencies, also called regulatory commissions, are responsible for controlling and regulating specific fields of activity. These agencies are independent, meaning that they are not subject to the regulatory authority of the cabinet departments, but they are subject to oversight from Congress. Regulatory agencies tend to have a great deal of power, such as the powers to create regulations and administer penalties for violations of their regulations. Prominent examples of regulatory agencies are the Federal Communications Commission, which regulates radio and television, the Commodity Futures Trading Commission, which regulates U.S. financial markets, and the Securities and Exchange Commission, which protects financial investors (Krutz, 2017).
Independent executive agencies Independent executive agencies, such as the CIA, the National Aeronautics and Space Administration (NASA), and the Environmental Protection Agency (EPA) are independent from the various cabinet departments and are thus not subject to their specific regulations. These agencies are responsible for carrying out highly focused tasks, such as managing intelligence, developing technology for space exploration, and protecting the environment, respectively. In all, there are more than 100 independent executive agencies, and they each play a pivotal role in helping the government and economy function properly. Like the cabinet departments, the heads of independent executive agencies are nominated by the president and confirmed by the Senate, and they are directly accountable to the president (Krutz, 2017).

The merit system was introduced as part of the Civil Service Reform Act of 1883, which effectively replaced the spoils system of civil servant appointment. Instead of allowing appointment to be based on friendship and political party affiliation, the merit system would ensure that selection would be based on experience and competence. This reform, also known as the Pendleton Act, established the Civil Service Commission to enforce and oversee its requirements of appointment. Cries for civil service reform grew deafening after a disgruntled staffer, Charles Guiteau, shot President James Garfield in 1881, after he was denied ambassadorship under Garfield (Krutz, 2017).
Public administration Public administration describes both the implementation of public policy, as well as the academic discipline that guides civil servants to implement public policy as intended. The study and development of public policy began during Woodrow Wilson’s presidency. In his estimation, running a constitutional government was far more difficult than necessary, and he saw the need for a systematic procedure to consistently determine the capabilities and complete the tasks of government. Wilson believed that public administration should be based on science – and not politics – but it should also take public opinion into consideration. Today, public administration is offered as a field of study in universities, and it is central to the success of policy implementation (Krutz, 2017).

The spoils system rose to prominence under President Andrew Jackson in 1829. Shortly after he was elected, President Jackson appointed several of his friends to key federal posts in his cabinet, many of whom were not particularly qualified for their roles. Jackson believed that filling these critical positions with people who already supported him and his policies would increase the efficiency of his administration. Furthermore, the spoils system made it possible for the president to enforce party loyalty by tying the success or failure of the party to their livelihoods. For decades to come, other presidents would expand on Jackson’s idea of political patronage by rewarding their party supporters with even more positions within their cabinets (Krutz, 2017).
Privatization Privatization is the incorporation of market forces in the private sector into the functions of government in the public sector. It is as much a measure to address the inefficiencies of the bureaucracy as it is an attempt to limit the scope of government. Supporters of privatization believe that competition on the free market would spur innovation and efficiency, while critics fear that it would not work with certain government functions. An example of privatization is the use of contractors to build military bases and prepare food during the Iraq War. These tasks had traditionally been completed by military personnel, but they were almost completely turned over to government contractors by 2006 (Krutz, 2017).

When new legislation is passed in Congress, the affected agencies must determine how best to implement it. Some of the nuances of the law may not be completely spelled out, at which point the agencies follow a process known as negotiated rulemaking. This process involves assembling a committee of experts with vested interests in the rules to form a general consensus of the rules in question. This process is overseen by a panel of neutral mediators, and it follows a set of procedures that are set by the mediators. Given the complex nature of many of the laws passed by Congress, negotiated rulemaking is often needed to hammer out the finer details of the legislation (Krutz, 2017).
Step 2: Complete the public policy matrix to explain and the compare the main policy types.

Explanation or definition How is it the same or different from the other types of policy? Example of the type of policy
Distributive policy A form of public policy that collects resources from many and provides benefits to relatively few (Krutz, 2017). Like redistributive policy, it regulates the allocation of resources. Unlike regulatory policy, it benefits only certain groups of people (Krutz, 2017). Government-sponsored programs, such as Pell grants, provide assistance for paying for college, and Federal Housing Administration (FHA) mortgage loans make it easier for low-income families to buy homes (Krutz, 2017). 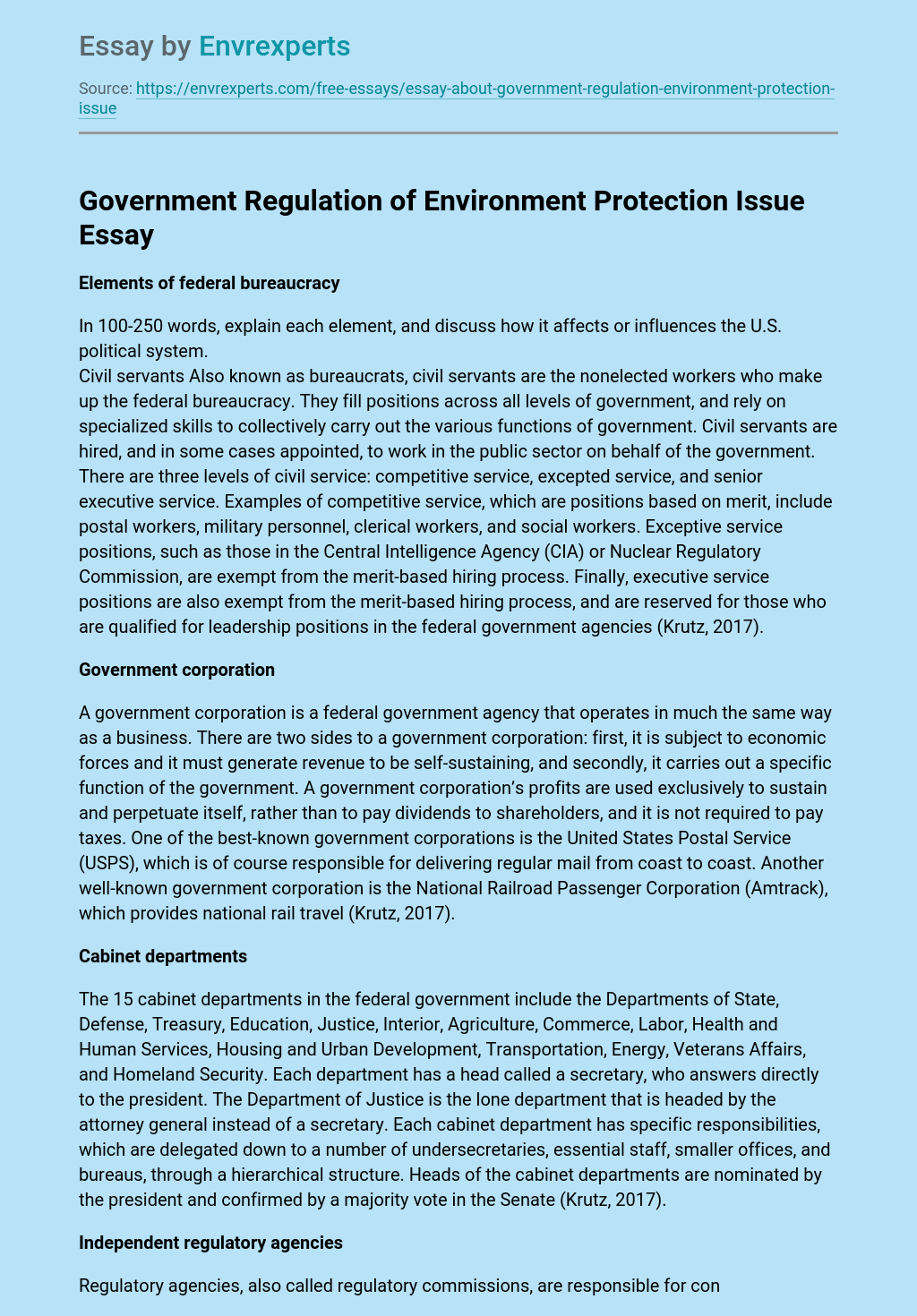