The greenhouse effect, in environmental science, is a popular term forthe effect that certain variable constituents of the Earth's lower atmospherehave on surface temperatures. These gases–water vapor (H2O), carbon dioxide(CO2), and methane (CH4)–keep ground temperatures at a global average of about15 degrees C (60 degrees F). Without them the average would be below thefreezing point of H20. The gases have this effect because as incoming solarradiation strikes the surface, the surface gives off infrared radiation, or heat,that the gases trap and keep near ground level.

Don’t waste time
Get a verified writer to help you with The Greenhouse Effect
Hire writer
$35.80 for a 2-page paper

The effect is comparable to theway in which a greenhouse traps heat, hence the term.Environmental scientists are concerned that changes in the variablecontents of the atmosphere (particularly changes caused by human activities)could cause the Earth's surface to warm up to a dangerous degree. Even alimited rise in average surface temperature might lead to at least partialmelting of the polar ice caps and hence a major rise in sea level, along withother severe environmental agitation.

An example of a runaway greenhouse effectis Earth's near-twin planetary neighbor Venus. Because of Venus's thick CO2atmosphere, the planet's cloud-covered surface is hot enough to melt lead.Water vapor is an important "greenhouse" gas. It is a major reason whyhumid regions experience less cooling at night than do dry regions. However, variations in the atmosphere's CO2 content are what have played a major role inpast climatic changes. In recent decades there has been a global increase inatmospheric CO2, largely as a result of the burning of fossil fuels.

If themany other determinants of the Earth's present global climate remain more orless constant, the CO2 increase should raise the average temperature at theEarth's surface. As the atmosphere warmed, the amount of H2O would probablyalso increase, because warm air can contain more H20 than can cooler air. Thisprocess might go on indefinitely.

On the other hand, reverse processes coulddevelop such as increased cloud cover and increased absorption of CO2 byphytoplankton in the ocean. These would act as natural feedbacks, loweringtemperatures.In fact, a great deal remains unknown about the cycling of carbonthrough the environment, and in particular about the role of oceans in thisatmospheric carbon cycle. Many further uncertainties exist in greenhouse-effectstudies because the temperature records being used tend to represent the warmerurban areas rather than the global environment. Beyond that, the effects of CH4,natural trace gases, and industrial pollutants–indeed, the complex interactionsof all of these climate controls working together–are only beginning to beunderstood by workers in the environmental sciences.

Despite such uncertainties, numerous scientists have maintained that the rise in global temperatures in the 1980s and early 1990s is a result of thegreenhouse effect. A report issued in 1990 by the Intergovernmental Panel on Climate Change (IPCC), prepared by 170 scientists worldwide, further warned thatthe effect could continue to increase markedly. Most major Western industrialnations have pledged to stabilize or reduce their CO2 emissions during the 1990s.The U.S. pledge thus far concerns only chlorofluorocarbons (CFCs). CFCs attackthe ozone layer and contribute thereby to the greenhouse effect, because theozone layer protects the growth of ocean phytoplankton. would probably alsoincrease, because warm air can contain more water than can cooler air. Thisprocess might go on indefinitely. On the other hand, reverse processes coulddevelop such as increased cloud cover and increased absorption of CO2 byphytoplankton in the ocean. These would act as natural feedbacks, lowering temperatures. 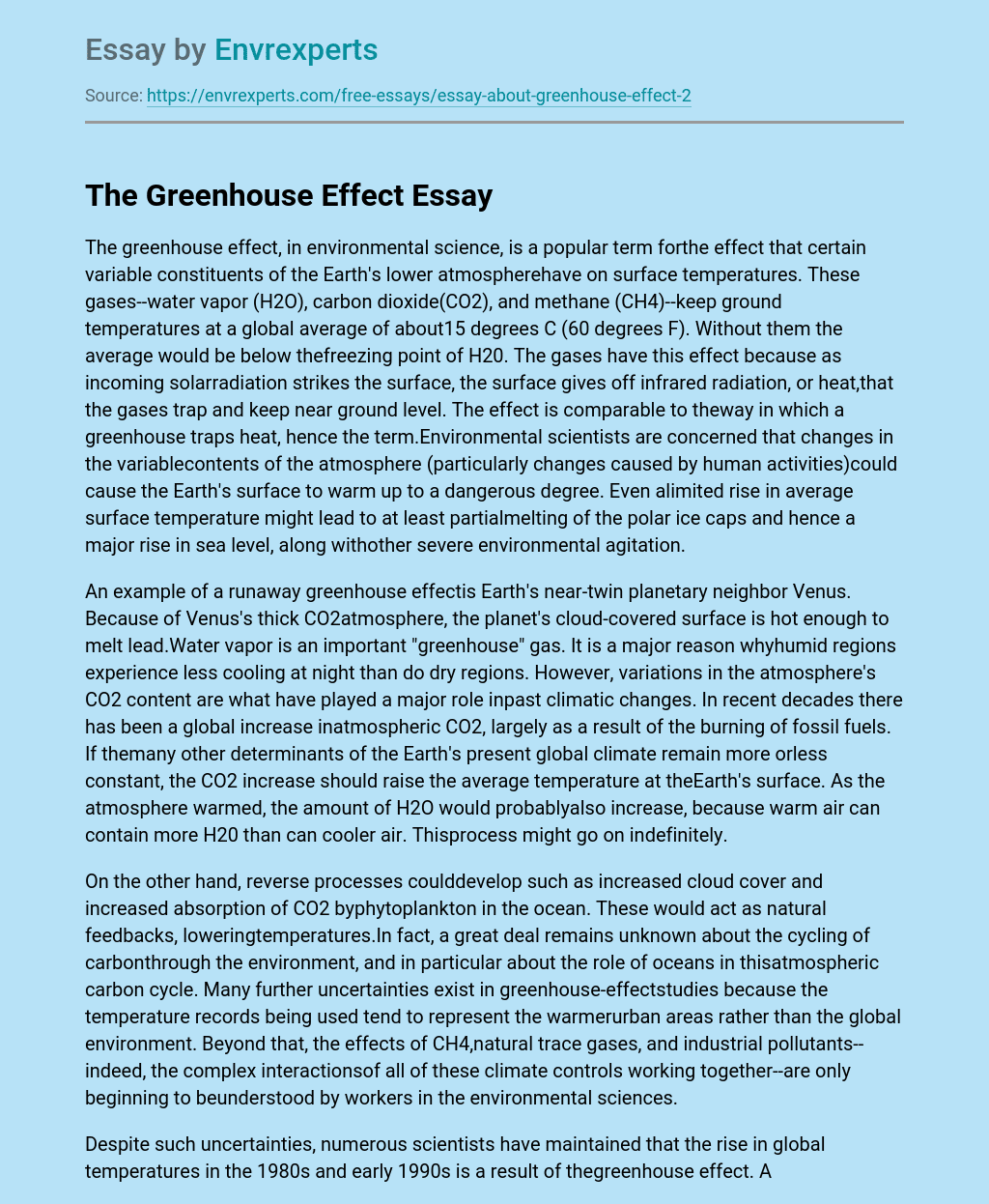