Over the last 200 years, global warming has been talked about in many different ways. Some talk about it being the end of the world or the world is just heating up. In the 1800s, levels of carbon dioxide were raising very high.

A Swedish scientist, Svante Arrhenius, became the first to discover more about the uprising rates of carbon dioxide and the rise of global warming. Before his studies, he asked the question, “Is the mean temperature of the ground in any way influenced by the presence of the heat-absorbing gases in the atmosphere?” (NASA) In the 1900s, new advancements for war and industrialization started to affect the carbon dioxide balance.

Don’t waste time
Get a verified writer to help you with Greenhouse Gases and Global Warming
Hire writer
$35.80 for a 2-page paper

Since there were missiles involved in the 1900s in war, radiation was formed. This radiation is affected by the greenhouse gases in the sky. In the 1970s, the first Earth Day happened. This day was to help the Earth by cleaning the streets of trash. Pollution is one of the problems of global warming today.

The fumes from cars affect the gases in the sky.

The Earth is heating up very slowly every day. As of right now, by the end of the century, the Earth will go up 3.5 degrees (F). In Forbes article, “The World Is Heating Up Fast, The Question Is How Hot Will It Get?”, it says, “An analysis of earth's climate system, including factors like the oceans' ability to absorb carbon and the behavior of fine particles in the atmosphere, concludes that even if we could reduce our emissions to zero overnight the planet would still heat up by two more degrees Fahrenheit by 2100.

The main reason why there is even such thing as global warming is because of the greenhouse effect. This is when the atmosphere traps heat. Some gases, like water vapor, carbon dioxide, methane, nitrous oxide, and chlorofluorocarbons. Here’s an explanation why they contribute to the greenhouse effect. Water vapor acts as a response to climate. As the Earth’s atmosphere increases, so does the water vapor. Carbon dioxide, or CO2, is released through many natural causes, like respiration and volcanic eruptions. Burning fossil fuels, deforestation, and land use changes also increase the carbon dioxide levels. Methane is produced by decomposition of landfills and agriculture. Nitrous oxide produced by the use of commercial and organic fertilizers, fossil fuel combustion, nitric acid production, and biomass burning. Chlorofluorocarbons are destroying the ozone layer.

Scientists believe in several things about why the Earth is heating up. One thing is that the Earth’s temperature is rising. Over the past 130 years, the Earth’s temperature has increased 1.5 degrees (F). Another thing is carbon dioxide levels are rising. In 2017, the carbon dioxide levels were 28% higher than in 1959. The IPCC was created in 1988 to track climate change. (Union of Concerned Scientists.)

Infrared radiation cools the Earth. This radiation is supposed to come back to the Earth, but some of it is trapped in with the greenhouse gases. In Weather Questions article, it says, “The reason why the air cools so quickly on a clear, dry evening is because the lack of humidity and clouds allows large amounts of IR radiation to escape rapidly to outer space as it is emitted upward by the ground and other surfaces.”

The Federal Government is trying their best to work with the states on helping the environment. Center for Climate and Energy Solutions lists some laws like the Clean Air Act, which requires the Environmental Protection Agency to work with states to reduce greenhouse gas emissions, including carbon dioxide and methane. Another one is the energy policy laws, which require the Department of Energy to partner with the private sector to research, develop, and deploy clean energy technologies, and to set energy efficiency standards for appliances and equipment. Another is the Department of Transportation is required to set standards that improve the fuel economy of motor vehicles. The last is the Department of Defense is required to plan for the global security consequences of climate change.

The reason that Antarctica's ice sheets are melting because of climate change. In the article, “What is Happening to Antarctica’s Ice Sheets?”, it says, “So what’s so worrying about the western glaciers melting if Antarctica is gaining more ice than it loses every year? After all, according to the NASA study, snowfall over the ice sheets in east Antarctica and the western interior adds hundreds of billions of tons of ice every year, enough to outweigh the ice lost by melting glaciers. The report even suggests that the ice sheets may actually reabsorb some of the lost glacial ice.”

The topic of global warming and climate change does go into my mind every day. I think about it sometimes, but it isn’t the main thing I think about. I usually think about how we could treat the Earth a little better. We could reduce our transportation and deforestation. There are many ways we can reduce the chemicals that are being released into the air. These chemicals are getting trapped in the atmosphere, and it is heating it up. I know the president of the U.S.A does not think global warming is a real issue, but it is. If you look at the statistics for the temperature of the Earth, you can see that it has increased. Since the temperatures of the Earth have risen, the sea levels of certain places have also risen. More natural disasters happen due to the issue of global warming. 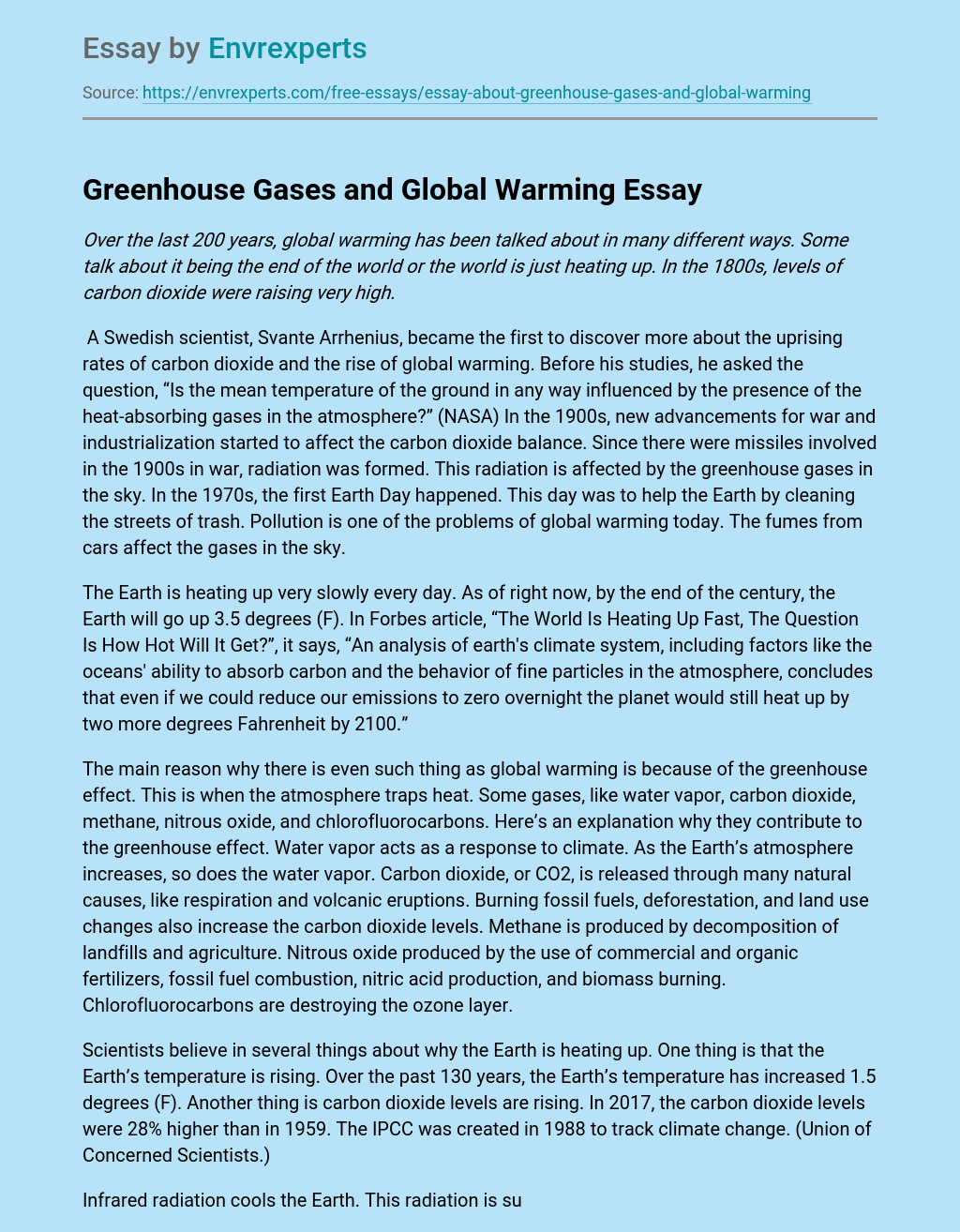