Should current Republican presidential nominee Donald Trump be elected as president, he fully intends to withdraw America from the Paris Agreement it entered last December, and is promoting “extraction and use of the most carbon-intensive fossil fuels”. In an open letter to the public, 375 scientists warned the US on the dangers of climate change and what Trump invariably plans to do to combat climate change: nothing. If anything, he plans on exacerbating the problem. But should the United States accelerate their efforts to address climate change anyway? The stakeholders on this issue are big oil companies, the United States as an international entity, most American citizens under the age of eighty, and the US House of Representatives and the Senate.

Don’t waste time
Get a verified writer to help you with Greenpeace Argument That Americans Lack a Heart When It Comes to Environmental Issues
Hire writer
$35.80 for a 2-page paper

In order to address this issue, the sub-issues to be taken into consideration are the ease of passing any executive orders through the House of Representatives and Senate, what these executive orders would consist of, and whether the US government should even be the entity charged with dealing with combating climate change via for example, revenueneutral carbon tax, or eliminating fossil fuel subsidies.

Organizations such as Greenpeace are in the affirmative position. Greenpeace argues that the American government no longer acts with its people's interests at heart, with those interests being a "safe climate and healthy environment". Instead, Greenpeace declares that the current US government is overrun by "corporate money, attacks on voting rights, and gridlock”, all of which limits the progress the US can make towards environmental protection.

Greenpeace does not use any facts to support its argument. It calls the American citizen to action by using 'we' to instill a sense of common identity, and tells them to ‘march on Capitol Hill'. Greenpeace incentivizes readers by blaming America's inability to make forward progress in preventing climate change on big corporations and politicians. It ends its argument by telling the reader they are responsible for “rebuilding our democracy”.

The argument Greenpeace makes is weak because of its lack of factual evidence. It starts by pointing out the problem in vague terms such as "democracy flooded by corporate money", "attacks on voting rights”, and “gridlock”. While all these suggested “problems' could indeed be real issues with the American democracy, Greenpeace only works with the vagueness. There is no elaboration on what corporation is using their money to run the US government behind the scenes.

Furthermore, Greenpeace's argument implies that corporate money is bad with no evidence to support its implication, stating that “[a] handful of huge corporations have joined forces to pass laws that will roll back the clock on the issues we care about most". Nowhere in its argument or its attack on huge corporations does Greenpeace clarify which laws it refers to, and what issues 'we' care about most that these laws prevent progress on.

The organization outlines its values as "A broad, diverse, and inclusive democracy in which every voice counts, An end to corporate money and influence in politics, [and] Free and fair access to the right to vote, a cornerstone of our democracy”. However, nothing is barring Americans from the right to vote or having their voice be heard thanks to the advent of the Internet and social media platforms), and Greenpeace provides no evidence to back up their implied claim that corporate money and influence in politics is objectively bad for US citizens. Thus, there is no need to fight for these values.

Greenpeace claims that politicians “block reform on climate change on a regular basis” because big corporations bought them out. This in turn prevents communities from accessing 'clean energy', which Greenpeace states furthers socioeconomic problems, such as "contributing to a growing gap between the rich and the poor" and "making it harder for marginalized people to vote”. There is no logical jump there. The organization also doesn't see fit to point out how it reached that conclusion either. Just because the rich or the poor cannot access clean energy does not mean they cannot access any energy altogether. It costs more to put up sources to extract renewable energy in a usable form and to use renewable energy than to stick with current fossil fuels.

Cato Institute does not believe the US is up to par when it comes to addressing climate change, and should not be the one in charge of efforts to do so. It backs up its argument showing discrepancies between how President Obama presented America's progress on greenhouse gases and the actual progress, or lack thereof. The Cato Institute does not advocate for another group to step up in putting forward efforts to address climate change. It argues that it should not be the US government that addresses the issue because of its inability to be completely frank with its citizens.

It quotes President Obama's announcement on November 11, 2014 that an “historic agreement with China on greenhouse gas emissions has been reached, and presents the guts of what made up the historic agreement that Obama failed to mention in his announcement. “the joint communique coming out of Beijing repeatedly said China "intends” to hold its carbon dioxide emissions constant ‘around’ 2030. By then, their emissions will be between two and three times the U.S.'s current emissions”. It points out how on two separate occasions (one in November 2014 and another on March 31, 2015), the US has stated intentions to reduce carbon emission levels by x% below 2015 levels by 2020 and 2025. The Cato Institute highlights Obama's statement that whatever happens during the Paris Agreement will not require Senate ratification because he will act accordingly, which the organization deems a falsehood: any legal trouble from the Paris meeting will stay under debate long after Obama's second term finishes.

The Cato Institute's report is incendiary, which belies its reliability as an objective source of information. It makes snide comments Senate gridlocks: “Any protocol to it requires approval by a two-thirds majority in the Senate, which is not going to happen"; the US government: “intend’[s] to reduce our emissions […] but intentions are not commitments, and are much more easily broken"; and the EPA: "Assuming (wrongly) as the EPA does […] Assuming (more correctly) that the warming will be 2.7 degrees Fahrenheit, our 'intentions' will forgo …" The Cato Institute also attacks aspects of the EPA as an entity that is not related to how the EPA makes its case on climate change: "This might explain why (the EPA) are curiously lacking in any public communications about climate policies". Although the facts and figures it uses to support its argument that the government in its current state shouldn't be the ones to handle efforts in combatting climate change hold true, Cato Institute's attacks against the reputation of other organizations and sectors do not bode well for its overall credibility.

It attacks the credibility and reputation of the US government and the EPA, and offers itself as the better alternative. After the Cato Institute attacks the EPA's numbers, it implies that the numbers it came up with itself for the rising of earth's temperature are “more correct". After derailing the president's announcement and intended emissions plan for America's next twenty years, it presents its own plan that the Cato Institute allegedly proposed to the UN back in 2009 that the UN is trying to implement right now. The Cato Institute is a stakeholder in the issue; it wants to be the organization in charge of addressing efforts the US should take towards preventing or slowing down climate change.

However, just because the Cato Institute has an ulterior motive in derailing President Obama's framing of the China deal or the EPA's inability to have good public communication does not disqualify the arguments that it makes. In its article “Obama's Meaningless China Deal on Climate Change”, the Competitive Enterprise Institute (CEI) supplements the central argument the Cato Institute presents with more substantial evidence. Just as the Cato Institute pointed out that the challenges and concerns America faces dealing with the environmental problems will stay gridlocked long after his term, the CEI states that “President Obama's signature on the deal has no legal force. And it will be up to future Presidents and Congresses after he leaves office in January 2017 to decide whether to require the emissions reductions agreed to”.

How the CEI outlines the agreement is also crucial in supporting the point the Cato Institute makes: the “US President Barack Obama and Chinese President Xi JinPing announced a commitment by both countries [ … ]” The use of the word 'commitment is particular. There is nothing legally binding about this announcement, supplementing the Cato Institute's accusation that "intentions are not commitments, and are much more easily broken”. In addition, the CEI goes further in depth (in an objective manner compared to the Cato Institute's attack on the Senate's inability to reach a two thirds vote) on the House of Representative and Senate's likely votes: "Republicans take control of the Senate in January. Majorities in both the House and Senate will be opposed to Obama Administration's climate agenda”. Although both articles supported the same argument, the CEI is more credible because it does not attack the Obama administration or the EPA, and does have an ulterior motive in reporting on America's climate deal with China.

After sifting through the information presented in these three articles and the video, the US should accelerate their current efforts to address climate change. Although I found one of the two articles arguing against the question to be biased and subjective, the second negative article was objective and forward. The website in support of the US accelerating their current efforts to address climate change, Greenpeace, spoke in generalities and did not offer any scientific evidence to back up its claims. In order to respond to the issue, Americans need to be more educated on the details of climate change conferences, and the scientific data backing up the issues need to be more publicly accessible.

Greenpeace Argument That Americans Lack a Heart When It Comes to Environmental Issues. (2021, Oct 31). Retrieved from http://envrexperts.com/free-essays/essay-about-greenpeace-argument-americans-lack-heart-when-it-comes-environmental-issues 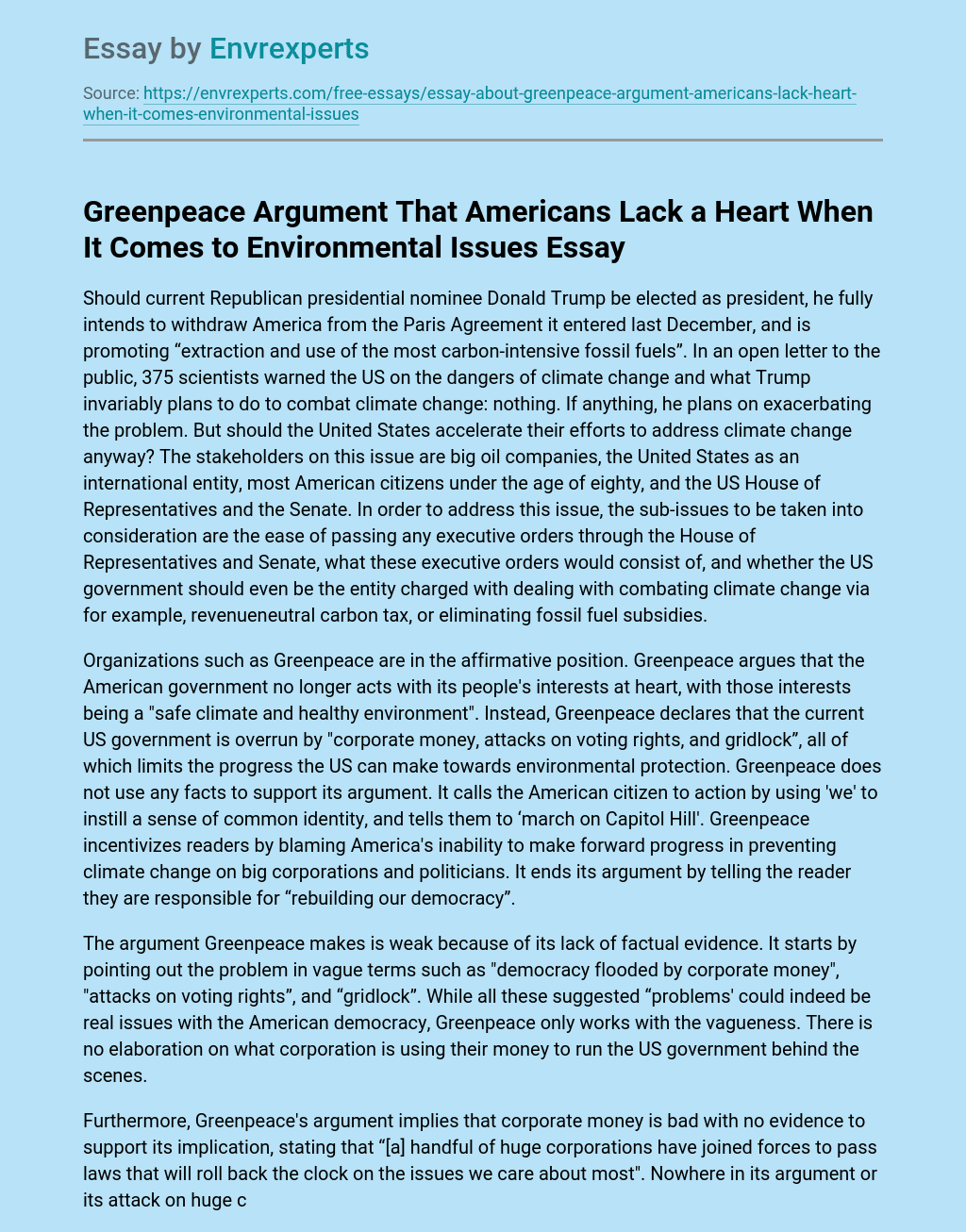