Groundwater Is a Major Source of Water Supply in Nigeria

This is due to the inconsistent and poor quality of public water supply. Groundwater is mostly used for domestics, industrial and agricultural purposes. In 2018, The Joint Monitoring Programme for Water Supply and Sanitation estimated that 60% of the total population in Nigeria were dependent on groundwater as the main source of drinking water: 73% of which are living in rural areas and 45% in urban areas.

There are variations in the estimated of total renewable groundwater resources in Nigeria Nigerian National Water resources master plan stated in 2013, that there were around 65,000 boreholes in Nigeria extracting an estimated 6,340,000m3/day and the majority of which almost 45,000 were equipped with hand pumps in small towns and rural areas In Nigeria, surface water is majorly used for irrigation systems.

Don’t waste time
Get a verified writer to help you with Groundwater Is a Major Source of Water Supply in Nigeria
Hire writer
$35.80 for a 2-page paper

Dams and reservoir are often used for irrigation water supply especially in the northern part of the country where rainfall is low.

Public irrigation schemes is predominantly from surface water sources while private sectors were reported to be mainly from shallow wells.

Although it was reported that farmers in the fadama-system also use wells to extract the water, most of these structures are not permanent and move from year to year. This procedure resulted in 66 800 ha area equipped for irrigation with groundwater (about 23 percent of total equipped area).

Most industries in Nigeria use borehole due to the cost of treatment of public water supply. Some companies have up to 10 to 15 borehole units which can lead to over pumping or abstraction. Groundwater is the major source of water supply for commercial and industrial activities. There is need for control of over pumping due to increasing industrialization in urban areas. Groundwater is mostly abstracted in form of hand dug well and borehole wells. The abstraction is not regulated by government. Any household can bore wells in their compounds which is mostly done by non- expertise and can be subjected to pollution and health risk.

Water quality problems associated with the use of ground water in Nigeria is as a result of pollution by human activities such as: agriculture, domestic waste, industrial wastes etc. in areas with shallow aquifers and natural groundwater issues such as sea water intrusion, dissolution of minerals, iron and manganese concentration in anoxic confined aquifers. Ezeigbo(1998) carried out a study on the influence of hydrogeology and geology on groundwater quality and concluded that mining and processing of metallic ores and coal have resulted in groundwater contamination with high iron concentration, aluminium and sulphate in Enugu coal mine.

Also in lead-zinc mining area of the Benue trough. The major water quality problems arises from presence of heavy metals such as Lead, Iron, Arsenic, Cadmium Cobalt etc in groundwater. Other sources of groundwater quality problem is oil spillage and gas flaring. The southern area of Nigeria is found to be rich in crude oil. Most of the groundwater in the state are contaminated with crude oil and had to result to groundwater remediation.

Due to poor solid waste management in Nigeria, most groundwater are polluted by landfill, dumpsite. Oyeku and Eludoyin(2010) assessed heavy metal pollution in hand dug well and boreholes located near Olusosun landfill in Ojota area of Lagos state. High concentration of lead, copper and iron was observed in the groundwater sample, which could be as a result of high disposal of lead batteries, used petroleum products etc.

The food basket state of the nation (Markudi) and its sub-urban area which is known for its high agricultural activities and food production was assessed by Mile et al (2013) for heavy metal pollution in groundwater sources. A high concentration of chromium, cadmium, iron and copper was observed above the WHO guideline value.

The pollution was attributed to the soil mineralogy, use of chemical fertilizers and agrochemicals on farm lands. Sridhar et al (1998) pioneered a study on lead contamination levels in indoor and outdoor environment of the populous city of Lagos and Ibadan. Lead pollution level in surface and groundwater beside soils, dust and foods were investigated. The results of analyses of lead level in various water sources indicate that majority of the waters showed lead level above the WHO prescribed limit.

Water from low density areas in Ibadan recorded relatively higher lead levels. However, the groundwater from high areas in both cities showed significantly higher lead levels. Since most groundwater supply (hand dug well and boreholes) are done by individual household. There is no special treatment done to disinfect the water. Most people believe groundwater are pure and free of contaminants because it is an underground resources. Only few household use filters or boil the water before drinking while others drink directly without treatment especially in the rural area.

Groundwater Is a Major Source of Water Supply in Nigeria. (2021, Oct 31). Retrieved from http://envrexperts.com/free-essays/essay-about-groundwater-major-source-water-supply-nigeria 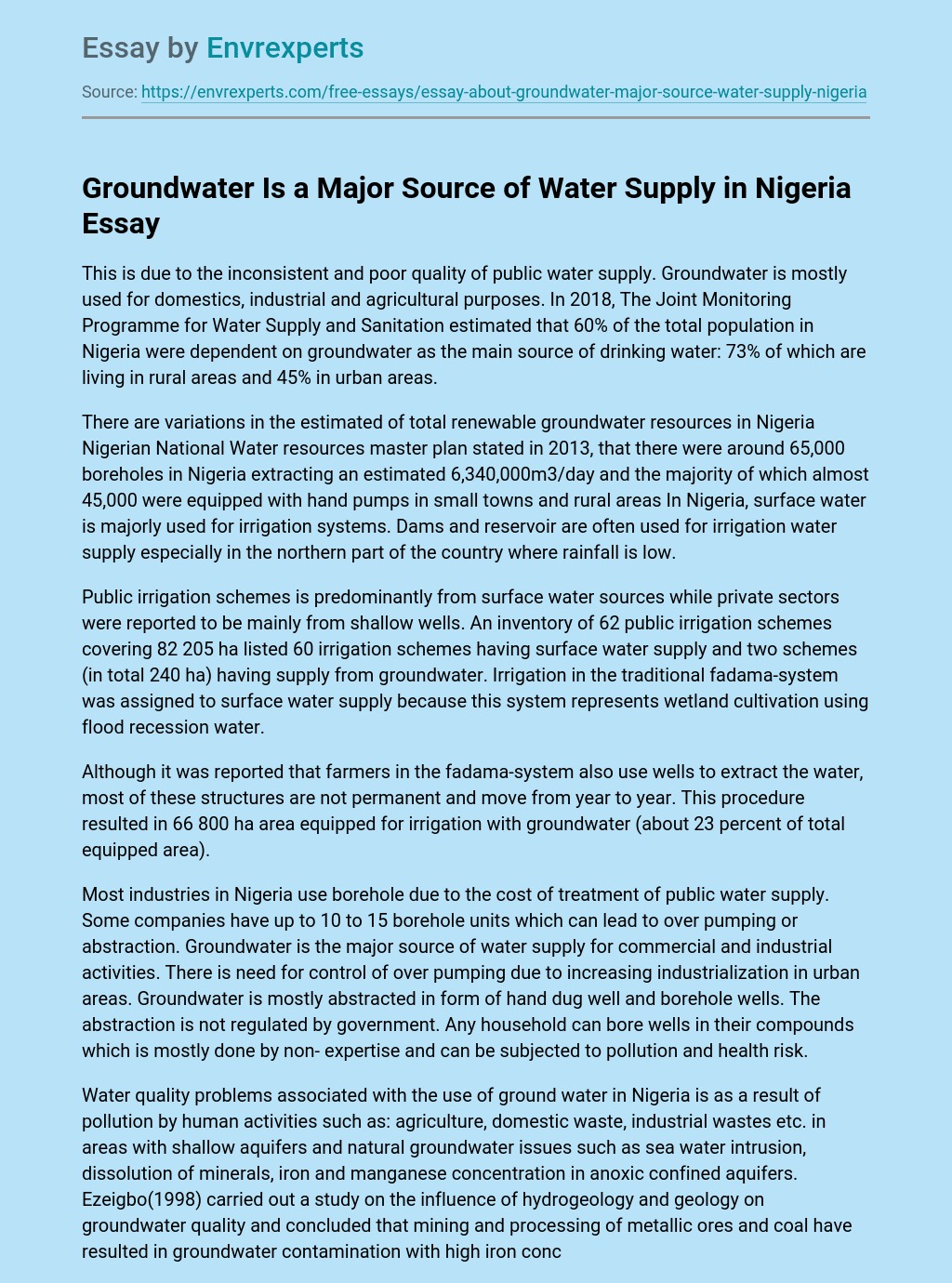