There are several types of research available which were carried out to map groundwater potential zone based on the application of GIS and remote sensing and other integrated techniques. Very few of the important literature reviewed are summarized below. Remote sensing and GIS techniques are mostly used for studying natural resources of the Earth at different levels.

These valuable techniques are employed for an emerging and interdisciplinary area among its emphasis lying on the application of tools and techniques of spatial information technology that has become key technologies and techniques for the collection, storage, processing, analysis, and mapping of spatially referenced data.

Don’t waste time
Get a verified writer to help you with Groundwater Mapping
Hire writer
$35.80 for a 2-page paper

GIS is utilized for spatial database development and Remote Sensing is utilized in gaining data and interpretation of the actual world condition for using various geospatial techniques for creating a map of groundwater fluctuation, development, and groundwater potential zone of the study area. (Potential et al., n.d.) GIS can enter, store, retrieve, process, and display spatial information in the form of maps or images (satellite, aerial photographs) including a database that is linked to the mapping.

GIS provides an integrated platform to manage, analyze, and display spatial data. GIS has also been used to develop the digital elevation model (DEM) of the catchment which in turn helped to define the top of the aquifer. Modern RS and GIS software enable digital RS data to be merged with other data. Digitized maps, e.g. road networks, or geological maps, can be combined with the images, making the interpretation easier.

An existing thematic map can be visualized together with the information from a satellite image. In most studies, the conceptual models essential as the backbone of the investigations, need to be quantified.

Here again, the techniques combining RS, GIS, and simple models can be used to estimate fluxes. Mapping units can be based on geomorphology, geology, soils, and vegetation. Some of the components of the hydrological cycle, such as actual evapotranspiration and groundwater recharge potential, maybe estimated for different mapping. (Hagos, 2010). Using of GIS in hydrogeology is only at its beginning, but there have been successful applications that started to develop. To advance the information and data feeding the GIS, the pressure is put to advance the RS platforms.

Electrical prospecting makes use of a variety of principles, each based on some electrical properties or characteristics of the materials within the earth In this study, Vertical Electrical Sounding (VES) method to carry out groundwater potential zone identification in the study area has been applied The Schlumberger method was adopted because of the fieldwork is faster, easier and economically save the money and software’s are readily available for its interpretation The resistivity values of the layers were measured using the ABEM SAS 300B Terrameter. The field data are interpreted by a 1D inversion technique followed by forwarding modeling by IPI2WIN software was used. Present work has shown that in a hard rock environment, Vertical Electrical Sounding (VES) has proved to be very reliable for underground water studies, and therefore the method can excellently be used for shallow and deep underground water geophysical Resistivity investigation. Most of the study area consists of good quality of groundwater. (Hagos, 2010)

Used an integrated approach to Groundwater Flow Modelling assisted by GIS and remote sensing Techniques within the (Raya Valley – Ethiopia). Remote Sensing (RS) application was used to define boundary conditions such as streams, lakes, wetlands, seepage areas, recharge zones, and evapotranspiration zones of the area. Pumping test data were analyzed to determine hydraulic parameters such as transmissivity and hydraulic conductivity. The laboratory analysis results of the water samples were processed and presented using AQUACHEM software.

The showed that the steady-state numerical model together with the spatial and statistical techniques available in GIS and RS can be used to estimate aquifer properties in the area even with a minimum amount of field data and can substantially improve our understanding of the groundwater flow system in response to recharge and abstractions. (Gnanachandrasamy et al., 2018) attempt to practice Remote Sensing and GIS-Based Groundwater Potential Zone Mapping in Ariyalur District, Tamil Nadu. This study focused on a probabilistic approach that used both GIS and RS satellite imageries to find the potential groundwater zones in Ariyalur.

To locate the potential zone of groundwater was used by various thematic layers like geology, geomorphology, lineaments, lineaments density, drainage, drainage density, soil, and slope maps were prepared from satellite data using GIS and ERDAS software and these thematic maps are integrated and overlaid in GIS to locate the potential groundwater zone of the area based on the integrated weighted overlaid thematic maps designate the groundwater potential zone. The result exhibited that the inverse distance weightage method offers an effective tool for interpreting groundwater potential zones for suitable development and management of groundwater resources in different hydrogeological environments. (Agarwal, Agarwal, Garg, & Garg, 2013)

Delineation of groundwater potential zone: AHP/ANP approach two of the most important methods of MCDM are AHP and ANP. AHP proposed by Saaty (1980) as a method of solving socio-economic decision-making problems has been used to solve a wide range of problems. In this study, the groundwater potential zone is delineated using remote sensing, geographical information system (GIS), and multicriteria decision making (MCDM) techniques. The analytical network process (ANP) is a method that makes it possible for one to deal systematically and includes the analytical hierarchy process (AHP) as a special case.

The integration of VLF-EM and electrical resistivity sounding results enabled the identification of a good site for productive borehole and groundwater in a typical crystalline terrain as the studied area. The VLF-EM method was adopted as a fast reconnaissance tool to map possible linear features such as; fault, and fracture zones while the electrical resistivity method was used to investigate prominent electromagnetic anomalies and provide a geo-electric image or section of the subsurface sequence. This study aims to delineate the groundwater potentials by determining the depth of occurrence of suitable aquifers. (Potential et al., 2010)

In the present study, an attempt has been made to delineate and classify possible groundwater potential zones in the Bilate River catchment of the south Ethiopian rift escarpment, found in SNNPR using integrated remote sensing and GIS techniques. The thematic layers considered in this study are lithology, geomorphology/landform, drainage density, lineament density, rainfall, soil, slope, and land use land cover were prepared using the Landsat ETM+ imagery and ArcGIS software.

All the thematic layers were then assigned weights according to their relative importance in groundwater occurrence and the corresponding normalized weights were obtained based on the Saaty's analytical hierarchy process. These weights were applied in a linear summation equation to obtain a unified weight map containing due weights of all input variables. The thematic layers were finally integrated using ArcGIS and IDRIS software to produce a groundwater potential zone map of the study area.

It is concluded that the integrated GIS and remote sensing techniques are very efficient and useful for the identification of groundwater potential zones. The generated, collected and digitized data organized into the logical groups of entities concerning geological factors (lithology and lineament), drainage density, and physiographic factor (geomorphology, slope, land use/land cover) to produce properly organized Geodatabase which will enable the responsible officers to make decision and review by concerned stakeholders and subsequent researchers to properly use water resources in the area. 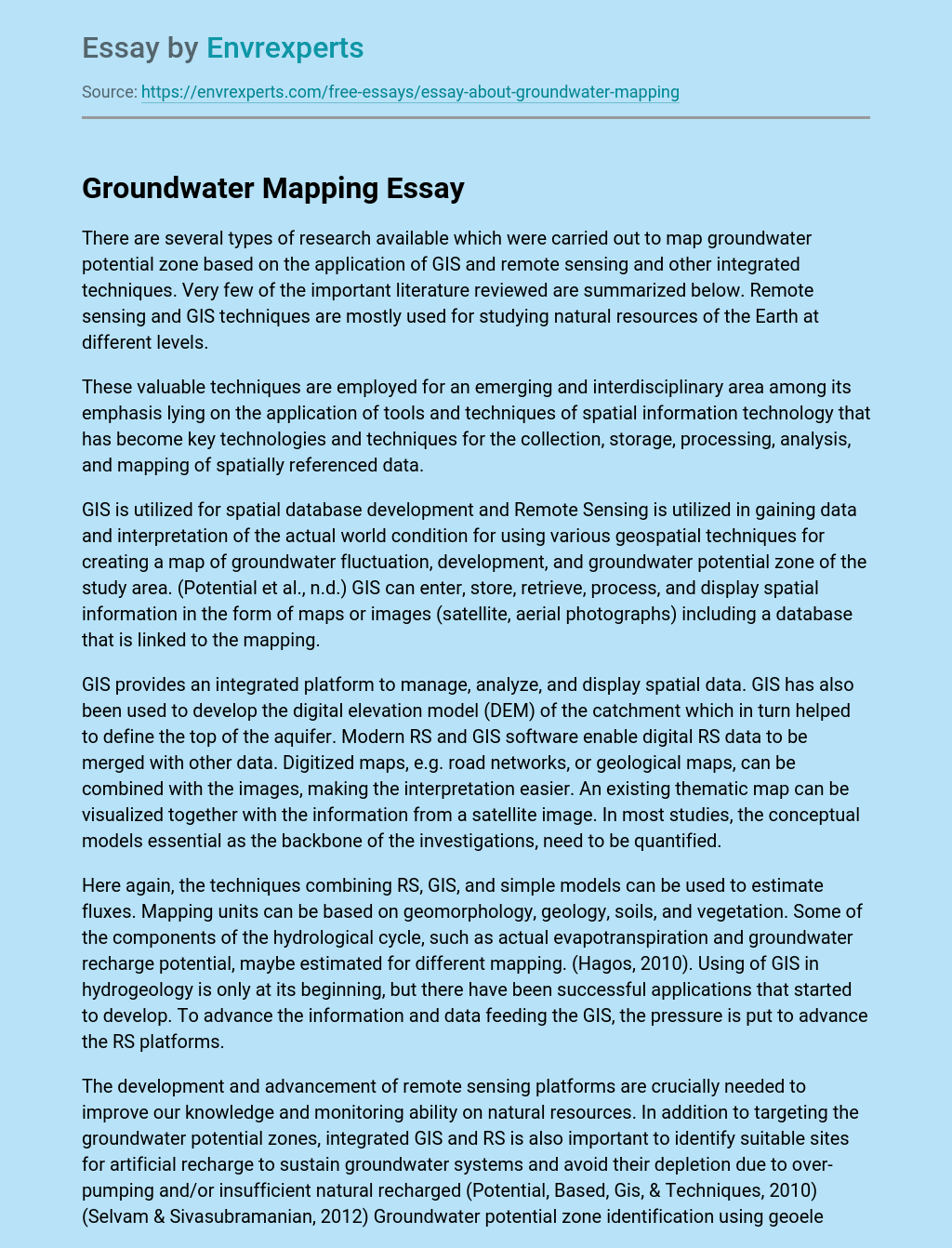