Habitat Marine Ecology and the Study of Interactions of Marine Organisms

The Flax Pond salt marsh is not only home to benthic organisms, it is home to organisms that reside all around the marsh as well.

Don’t waste time
Get a verified writer to help you with Habitat Marine Ecology and the Study of Interactions of Marine Organisms
Hire writer
$35.80 for a 2-page paper

Each organisms has a preference as where they want to reside depending on the water temperature, salinity, and the density of the water.

As well as salinity and temperature, the density level also ranges from the surface to the benthic area. The density level towards the surface reads 1.016 ,where at the bottom it reads 1.018 which once again does not seem like a large difference, but for many marine animals, algae, and plants, it could mean a lot. Due to the temperature, salinity, and density ranging from the surface to the bottom, a main biotic factors that could occur is competition. The competition between different species or same species could occur due to limited space or supply of resources. If there is a limited amount of room in the benthic area, either intraspecific competition could occur, which leads to adaptation, or interspecific competition, which could cause competitive exclusion. Many benthic organisms have competition because they dont only have to compete with organisms, but they have to deal with different benthic plants, rocks or boulders. At the Flax Pond salt marsh, the lady crab (ovialipes osellatus), was found. This crab, which often digs deep into the sand will sometimes have competition with a different type of crustacean such as the Fiddler crab (ocypodidae), the Blue Claw Crab (Callinectes sapidus), and the Horseshoe Crab (arthropods), which were also found at the Flax Pond salt marsh. These crustaceans are all benthic creatures who scavenge the bottom of their environments for food or shelter. Not only do marine animals have competition with other animals, many animals may also have competition with certain algaes such as the knotted wrack (Ascophyllum Nodosum). This form of algae will latch on to rocks and boulders which will make it hard for some marine animals to find a home on those certain rocks or boulders. In between these rocks and boulders, sticking out of the marsh, were eelgrass (Zostera Marina), and salt meadow cord grass (Spartina Patens).

Within coral reefs, this hard bottom community, there are many a biotic and biotic conditions that could either harm the coral or help it. A major a biotic condition for a coral reef would be water temperature. The temperature for fringing coral reef in Fiji ranged between 24.9 degrees Celsius and 26.3 degrees Celsius, which is also a general temperature for many coral reefs. Coral reefs are very sensitive to climate changes, if a coral reef is either too cold or too warm, the coral reefs could be damaged, which could damage many homes for different organisms. With too warm or too cold of a temperature, the coral could expel its zooxanthellae, which could lead to bleaching. Not only does an abiotic or a biotic condition affect the coral reefs or kill the coral, other aspects could harm them as well. The Crown-of – Thorns sea star (Acanthaster planci), is a marine animal that feeds upon coral polyps which kills the coral. Coral reefs are often in shallow waters because sunlight is absolutely necessary and the entire area is a photic zone. The waters are nutrient- deprived because the coral do not need nutrients to live. A major biotic factor is the symbiotic relationships between the coral and other organisms or algae such as the zooxanthellae. This algae lives within the coral and give the coral their beautiful colors. These beautiful colors are not only for looks, it is also a form of protection for many of the marine life that live within the reef. The Butterfly fish is one of these organisms that use the beautiful colors of the reefs to blend in so that predators cannot see it. This algae that lives within the coral, grow due to the major factor of sunlight or photosynthesis. The algae not only protects the coral reefs, but is also a source of food for many fish that live within the coral reefs. The Parrot Fish is the one marine organism that feeds upon the algae and cleans or grooms the coral. The parrot fish then uses that algae to create a bubble of mucus to later protect itself from danger.

Another marine animal that will help the coral from becoming smothered with algae, is the Hawksbill Turtle. The Hawksbill Turtle cannot dive in deep waters, so they reside in shallow waters where the coral reefs grow and feed upon the algae. While the Giant Clam (Tridacna Gigas), does not eat the algae to help the coral, instead the Giant Claw is a filter feeder that filters the water by extracting oxygen and filter plankton which helps the clarity of the water which means more sunlight for the coral.

The hard bottom community known as a kelp forest, had many biotic and a biotic conditions that can affect the kelp in many different ways. Kelp forests have temperate climates that are between 50 to 70 degrees Fahrenheit and have a salinity of 26 to 32 ppt. They have a large holdfast that hold onto the benthic bottom and grow upward and go through 2 stages within their life cycles. Kelp forests grow in nutrient rich waters that contain nitrogen and phosphorus which helps the kelp grow up to 2 feet in length per day. With a drastic change in these nutrients, the kelp could stop growing and begin to die. The amount of nutrients of the water will also affect the clarity of the water. With clear water, this is affect how deep the sunlight is transmitted into the water. Sunlight, is another major a biotic factor that is necessary in order to have a healthy kelp forest. The Giant Kelp, which is the main type of plant within a kelp forest, in ideal conditions, can grow 30-60 centimeters per day. These kelp forests can only grow as high as the tide allows them to grow, they can not grow any larger. With these types of canopies that the kelp forms, many animals will live within these forests. Sea Otters (Enhydra Lutris), often live within these kelp forests because of the protection the forest provides against their predators.

Within the Flax Pond salt marsh, coral reefs and kelp forests, each habitat had specific a biotic and biotic conditions that affect the habitat environment. Although the algae, the plants and the marine life are different throughout these different habitats, each a biotic and biotic condition is very similar. Each habitat would be incredibly affected if their was a drastic change in the temperature, salinity and density of the water. Clarity of the water is also another important a biotic factor that if it were to change, it would affect the amount of sunlight that was being transmitted into the water. In coral reefs and kelp forests, with less sunlight, the coral or the kelp will become affected immensely. Throughout the Flax Pond salt marsh, coral reefs and kelp forests, many biotic factors are shared as well. Competition is a large part of a healthy habitat, especially when new organisms are trying to find a home. Competition between the same type of organism or with other organisms, is how adaptations are developed within these habitats. Without adaptations, many species would never be pushed out of their range of tolerance, and a certain habitat would become over crowded. The three habitats may be very different from each other, but they are each unique and share many similarities

Habitat Marine Ecology and the Study of Interactions of Marine Organisms. (2021, Oct 31). Retrieved from http://envrexperts.com/free-essays/essay-about-habitat-marine-ecology-and-study-interactions-marine-organisms 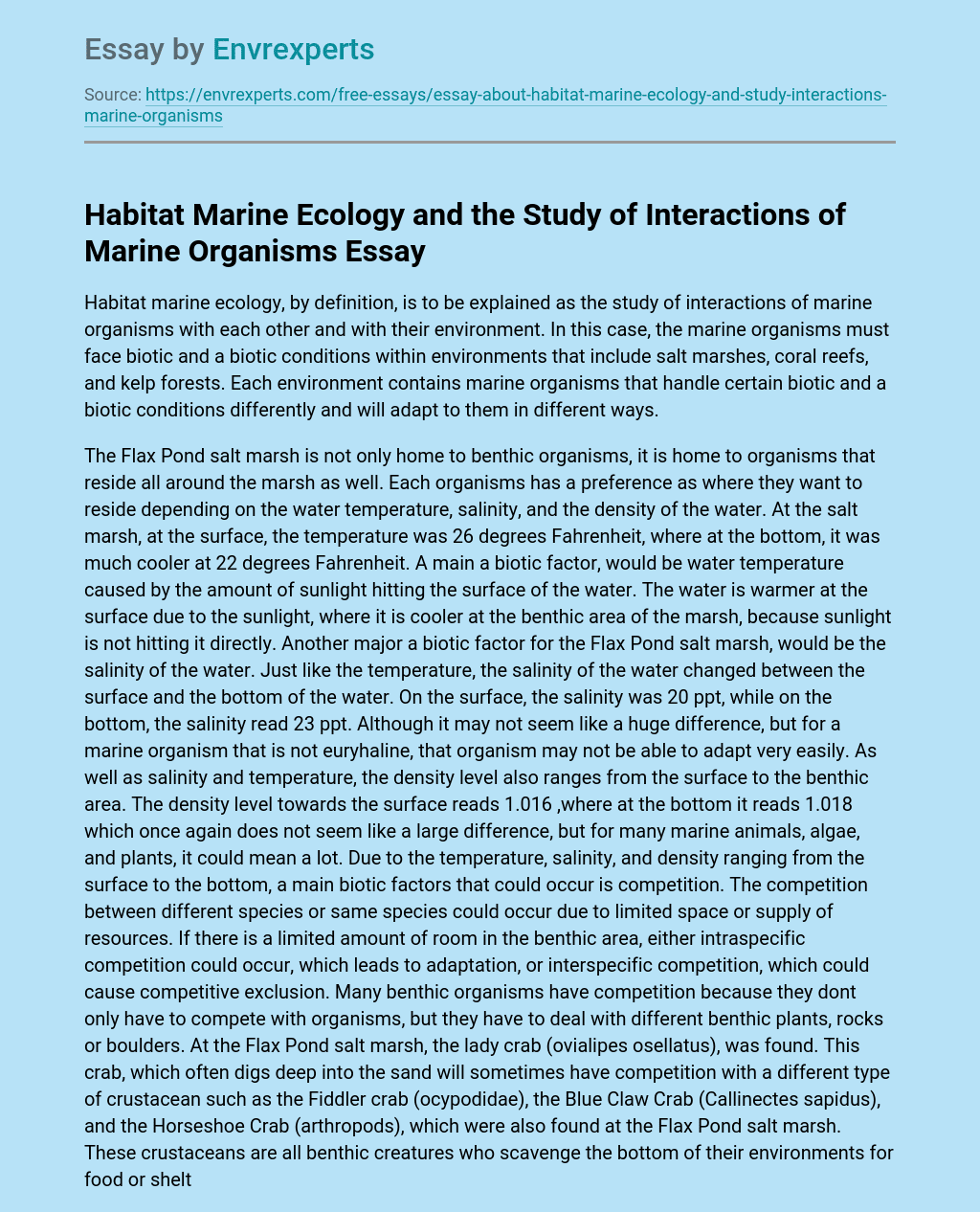