A Habitat Selection Under Predation Hazard in the Ecology

Ecological Scientists believe that some organisms may choose habitats or foraging sites based on both the net energy return to the organism and the mortality risk involved for the forager. The rate of foraging often decreases according to certain changes in their behavior. An example of these changes can be when the organisms shift habitats due to the presence of predators and also display behavioral changes from predator intimidation. Gilliam and Frasers study is based upon the organismal level, meaning that organisms must find a balance between foraging a sufficient amount of food and at the same time avoiding predation.

Don’t waste time
Get a verified writer to help you with A Habitat Selection Under Predation Hazard in the Ecology
Hire writer
$35.80 for a 2-page paper

Juvenile creek chubs were used in a model to determine preferred foraging areas that minimize the mortality rates, with the main objective being able to acquire an adequate net energy gain. The motivation here relies on whether or not there is an increase or decrease in mortality rates. Therefore, forcing the minnows to shift foraging sites to an area where there is more of a threat to the minnows but it is complemented by a plethora of resources.

The significance in devoting an entire study to this subject is that its the first in its field and that it helps future ecologist interested in this field of study to understand the behaviors of minnows while foraging and avoiding predation.

The experiment was conducted using wooden channels consisting of an area of .42m x 2m in the stream. A mesh wire cloth was used to divide the central refuge and also to prevent a predatory adult creek chub from passing into the experimental area.

Predator and food densities were manipulated, which resembled local streams where adult creek chubs are the only piscivorous fish. The experimental area was cleaned daily with a suction pumped which prevented unwanted invertebrates from inhabiting the studied area. In order to measure the gross foraging rates, the Tubifex worms were allowed to burrow in plastic trays consisting of mud for 30 minutes prior to them being added to the foraging areas. A mesh was fitted to the surface of the mud in order to prevent feeding attempts by adult chubs. Minnows were then fasted over night in order to create an increased appetite for the Tubifex worms. The minnows were then placed in the refuge and allowed to forage for a set time interval.

The results of this study showed that the minnows spent less time in the central refuge when the resources in the high-risk site increased. However, the presence of high-density predators affected the time the foragers consumed the worms. 42% of the time the chubs spent their time in the refuge, 13% spent time at a feeding dish and 45% out of the refuge but not foraging, rather lingering on the edges of the foraging area. Overall, 9984 fish minutes were recorded. The minnows were also noticed switching from the one-predator area to the two or three-predator area.

The results showed a variety of things. First by the amount of fish minutes recorded, 9984 minutes, it proved that the feeding at the dishes was vigorous in both the initial trial that measured the rate of foraging and also in the choice experiment. Also the shifts that the predators made from the one-predator site to the two or three-predator site, concluded that these shifts indicated a step function instead of a gradual shift. According to the articles, it was a surprise that the foragers were so aggressive while in the presence of three predators and the high-density resources. The behavioral patterns displayed by the foragers also varied according to the density of predators. In the high hazardous, highest resource trial, the foragers would frequently circle the predators then resume feeding. While in the lower food level, they would shift from the one-predator forage site to the refuge. If the fish had behaved in relation to a common goal of a determined food ration, then the foragers would be expected to spend more time in the refuge rather than the predation sites. Instead, the minnows spent less time in the refuge as the food density increased, therefore making it instructive. This proved that the fish accepted the higher risk of mortality in return for the higher reward. They spent less time in safety as food increased, therefore accepting the increased rate of exposure to predators. These conclusions help the experimenters and others better understand the problem presented in the introduction. It can now be concluded that species, at least juvenile creek chubs, are prone to put themselves at higher risk for a better selection of food.

A Habitat Selection Under Predation Hazard in the Ecology. (2021, Oct 31). Retrieved from http://envrexperts.com/free-essays/essay-about-habitat-selection-under-predation-hazard-ecology 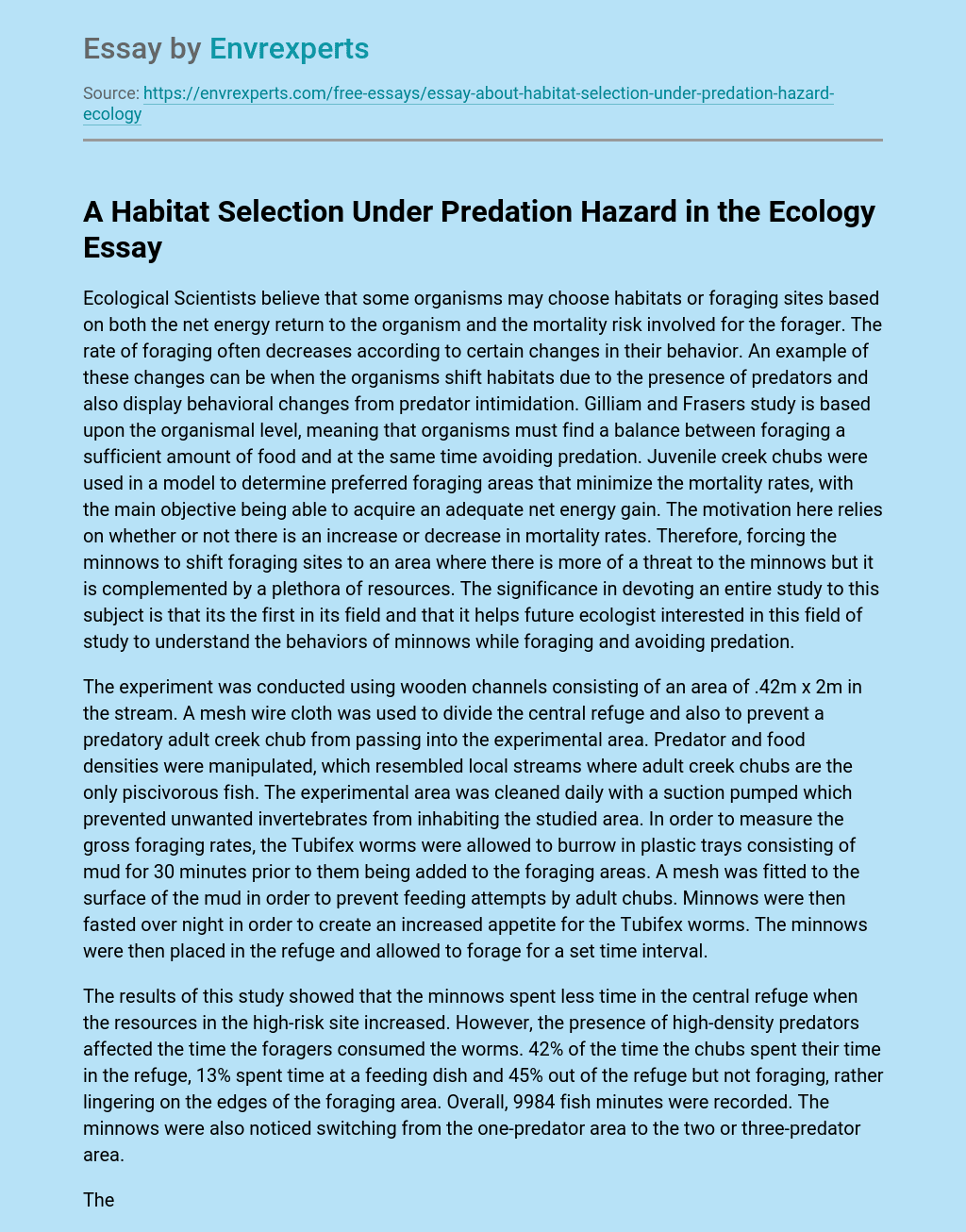