Working in the electronics retail space for over half a decade, I can attest to how fast computers get updated and replaced. Commonly you can have several new models shortly release after the previous one which is mind blowing. Recently I asked myself what happens to older computers once they are deemed obsolete by their owner. After doing some digging, it turns out most of those old computers are just being thrown away and that in itself has become a major environmental issue.

Don’t waste time
Get a verified writer to help you with The Harmful Consequences of Improper Disposal of Old Computers and the Efforts against It
Hire writer
$35.80 for a 2-page paper

My goal in this paper is to explain some of the harmful consequences that have arisen from improper disposal of old computers and what some are doing in an effort to avoid it from happening.

Americans own billions of electronic products and it's safe to say that number will continue to rise. Electronics has made lives easier for plenty of people and manufacturers continue advancements to be competitive in a rapidly changing market. “With high turnover and obsolesces rates, in the next five years, about a billion computers around the world will be discarded” (Toothman).

Toothman goes on to explain this trend has started to give rise to higher amounts of electronic waste or e-waste which is any product discarded by its owner that uses electricity. In “The Effects of Not Recycling Computers” by Ms. Kat Long she explains "in the U.S., in 2009 alone, discarded electronics, including computers accounted for approximately 2.37 million tons of waste and about 1.7 million tons of that were destined for landfills.

” Upon reviewing that information, I felt that to be a staggering amount of e-waste. Bob Downing, as cited in Toothman's article, states electronic equipment, "such as PC circuit boards, can contain up to 8 pounds of lead, along with lower levels of mercury, arsenic, cadmium and beryllium." Not is all bad as computers also harbor valuable elements within their infrastructure such as gold and copper (Long). While it might not seem like it by appearance alone, electronics are like cocktails made from toxic chemicals and highly valuable elements. This is quite saddening as computers in a landfill pose negative consequences on many levels. At this time, "e-waste accounts for 4 percent of total trash.

The Harmful Consequences of Improper Disposal of Old Computers and the Efforts against It. (2021, Oct 31). Retrieved from http://envrexperts.com/free-essays/essay-about-harmful-consequences-improper-disposal-old-computers-and-efforts-against-it 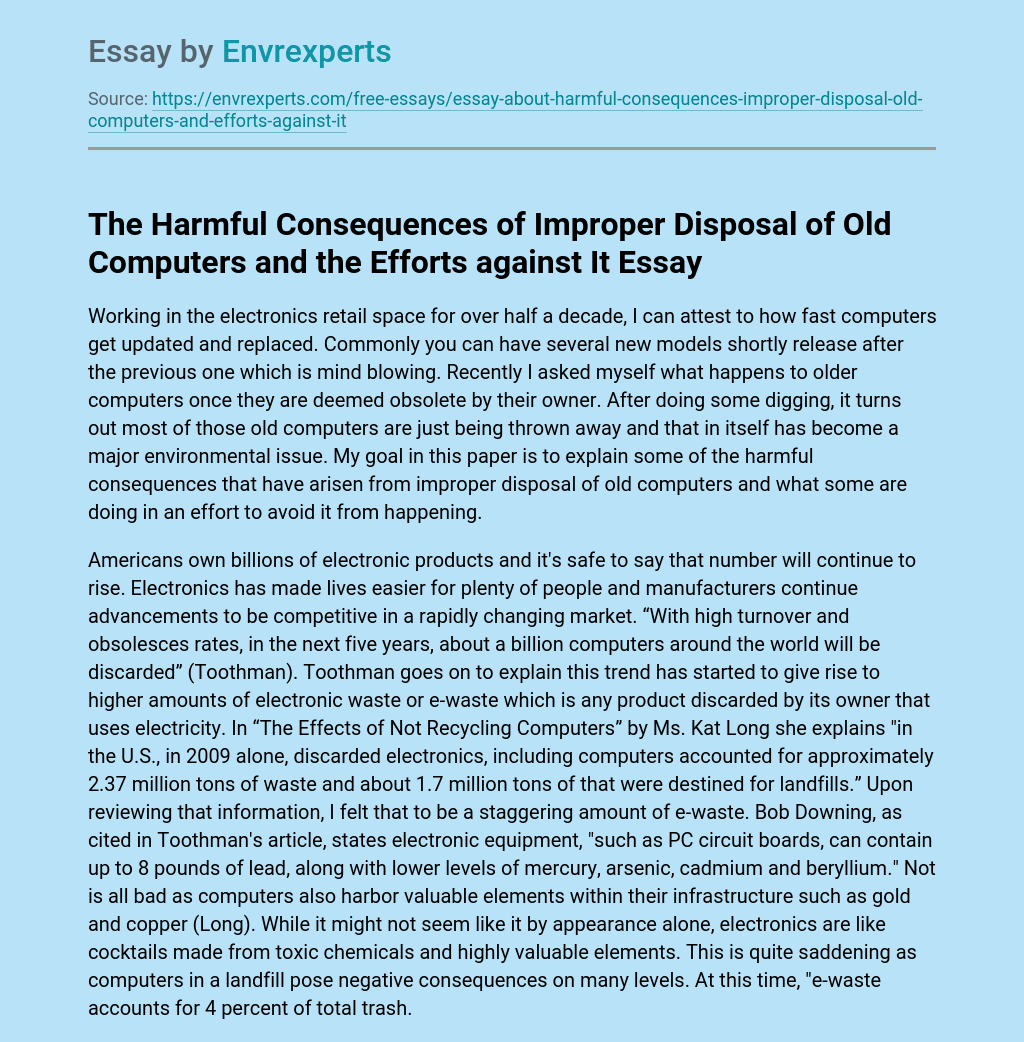