Hazard of Industry for Environment

Bradbury suggests in “There Will Come Soft Rains” within The Martian Chronicles that the human race will ultimately meet its doom. And when it does, the universe will simply continue revolving on its axis without experiencing the slightest impact caused by it. Especially pertinent to the 21st-century audience, Bradbury suggests that nature has a potent ability to overpower humans and our impact on the world, despite all industrial innovations that have revolutionized our civilization and despite all the technological accomplishments we might have achieved during our time on earth.

Don’t waste time
Get a verified writer to help you with Hazard of Industry for Environment
Hire writer
$35.80 for a 2-page paper

This particular chapter in Bradbury’s The Martian Chronicles blatantly highlights the struggle of mankind against the all-powerful nature. Specifically, the automated house is suggestive of this conflict- the home is a technologically advanced structure and can certainly be considered a modern accomplishment for man. Bradbury heavily stresses how highly-technological the structure is by ridding the setting of all human presence in the chapter. By doing so, he suggests that mankind thinks it is so intellectually inclined to the point where it can design a machine that can function without the constant supervision of humans.

However, even though man believes himself to be powerful through such mechanical innovations, the “smart” house is still not shielded from the pouring rain (167).

The house still gets wet, implying that the laws of nature indeed still limit man and his works. Metaphorically, the rain drenching the sides of the house is indicative of the natural ways of the universe overpowering or rather eclipsing man’s wish to leave an impact on the world during his existence.

Bradbury then elaborates on this concept of man’s lack of power in the poem, “There Will Come Soft Rains,” which he strategically inserted to directly follow the description of the rain as a reemphasis. Indeed, this poem has a very great significance to The Martian Chronicles, clearly since it is the actual title of one of the novel’s chapters. In this specific section, Bradbury exclusively describes the automated house. To stress the house’s high degree of technological advancement and ability, no human presence is described. The author does this to accentuate the extent to which humans can produce such highly mechanical systems, and despite such innovative feats, mechanics can never outshine nature. At certain times the house acts out according to the planned schedule. For example, at 9:05 AM the house was programmed to conduct a poetry reading session. The literary piece selected was “There Will Come Soft Rains” (170).

Bradbury incorporates a moment of foreshadowing here. This home, which is completely automated and programmed by the hands of mankind, starts to speak of man’s downfall. By doing this, it is essentially predicting its doom as well as the doom of its creator. Particularly, the last two stanzas state, “Not one would mind, neither bird nor tree, / If mankind perished utterly; / And Spring herself, when she woke at dawn / Would scarcely know that we were gone” (170). Bradbury, again, intentionally personifies nature to give it an authoritative and overpowering quality over humans. For example, “Spring” is capitalized, even though it usually is not. This suggests that “spring” is a proper noun, and it is similar to how we capitalize names like “God.” Moreover, Bradbury purposely states that the bird and tree would not “mind” if the human race were to vanish, as if they truly possessed critically-thinking brains (170). Bradbury endows all of nature with an intelligent quality, ultimately to have his reader understand that we cannot outsmart nature. For example, in this modern era mankind has tried to build magnificent and strong towering buildings throughout the world. All these structures constructed by human hands, however, will eventually deteriorate, no matter how sturdy the architectural foundation. Our own school’s library is a prime example. The building was erected on a structurally sound plan that involved a lot of artistic thought and technological assistance like blueprints and bull dozers. Yet, despite all of our attempts to preserve it, it is still sinking. One day, it will inevitable succumb to the earth, and when this happens, nature will be indifferent to it (171).

Other structures that are clearly being overpowered by nature include the Leaning Tower of Pisa and all the Greek ruins that have been crumbling over the last centuries due to natural damage. These examples illustrate the inevitability of all manmade structures, for man can never outsmart or outlast the natural universe. Additionally, each stanza of “There Will Come Soft Rains” suggests mankind’s irrelevance. The first three stanzas are solely restricted to natural depictions- the environment and the animals that live in harmony with the world (170). This tone of serenity and accord is then sharply contrasted with the concept of war, as referred to in the fourth stanza. This global issue is associated with man; therefore, man causes destruction, and man is doomed for destruction himself. By describing the peaceful ways of nature as the war consumes mankind, the poem suggests the indifference that the natural world has towards man. This concept, which is so blatantly highlighted in “There Will Come Soft Rains,” actually sums up much of the instances described previously throughout the novel. For instance, in “The Taxpayer,” a man pleads to go to Mars because he fears that Earth will soon inevitably break out into immense atomic warfare (32). Also, the concept of nuclear war is also mentioned in “The Million-Year Picnic,” for the characters themselves understood that war is highly destructive (174). By including the significant poem “There Will Come Soft Rains,” Bradbury shows that he is intensely concerned with warning us of our own demise, which we induce through the phenomenon of impending war- a war of man, a war unfit for nature.Following the poem is Bradbury’s sudden shift to a description of the house ablaze. The house begins to deteriorate from the harsh natural conditions, as the fire overtakes it (170).

In other words, this manmade manufactured structure starts to perish, which hints at the deterioration of its creator, or rather mankind, as well. As Bradbury describes, “The house gave ground as the fire in ten billion angry sparks moved with flaming ease from room to room and then up the stairs … And the wall sprays let down showers of mechanical rain” (171). Bradbury states that the house is yielding, suggestive of how man will ultimately yield to the powers of the natural universe. For example, all humans must die. We can try to resist our doom, and we have attempted to do so through medical technology. Nowadays, many elderly people are supported at their age with pills, oxygen tanks, and frequent checkups with the doctor. Similarly, cancer patients, for example, have a chance nowadays to conquer their disease and live to their old ages only to be put on more medications. Especially relevant to the 21st century reader, who is surrounded by such medical innovations that can extend man’s lifetime, Bradbury wants us to understand that we will eventually “give ground” to nature, no matter how powerful we feel due to technology (171). Through this particular quotation describing the house-consuming flames, Bradbury attempts to warn his modern reader by communicating the all-powerful ways of the natural universe. In this instance in which the scorching blaze overtakes the manmade house, Bradbury demonstrates how effortless it is for nature to conquer over the human race, as he describes the fire spreading with such easiness (171).

Nonchalantly, the fire merely consumes the house because eventually, what mankind does and what mankind produces is of no value to nature. This is clearly demonstrated when the flames turn the artwork of Picasso and Matisse into ashes. This is a prime example of how man’s works lack universal impact. Supposedly, according to humankind, these artists are extremely accomplished. They have developed such a genius and respectable reputation; however, nature does not recognize that (171). Ultimately, this implies that man’s existence is weak and thus he will inevitably be erased from the face of the earth, no matter how much he might have contributed to the man-made ideas whether they are art, industry, or technology.While implying our unavoidable conquest, Bradbury also grants the fire an authoritative quality. The flames are personified to give it a sense of great power, as if they were endowed with God-like qualities. Through the phrase “flaming ease,” Bradbury wishes for his reader to understand that nature is far more powerful. Indeed, we have the ability to build artificial islands for the celebrities and construct artificial mountains, like the dry ski slopes in Dubai. Yet, that same island will inevitably begin to sink into the vast sea, and that same mountain will ultimately be consumed by the desert sands. By describing the fire’s complete dissolution of the house, Bradbury purposefully attempts to point out these situations in which humankind must ultimately yield to nature. Moreover, to further grant nature a more God-like presence, Bradbury depicts the fire as a force of “ten billion sparks” (171).

By relating the flames to a massive number, the author implies that the fire is omnipotent and immense. Like God, the flames can consume all that is manmade. In this current age of the 21st century, this concept still applies. For example, as industry continues to boom exponentially, oil spills happen more often. Of course, there are casualties that include the marine animals that live underwater and the predators of those animals. However, despite the destruction caused at that moment, the ocean- a powerful natural body- is able to replenish itself by organically washing the oil to shore, where it is eventually disposed. Nature, as always, has cleaned itself of man’s touch. Unlike humans, nature is powerful enough to sustain itself, rejuvenate itself when needed, and defend itself against threats like the destruction caused by the human race. Currently mankind is testing nuclear weapon, trying to cure cancer, conquering regions to expand empires, and constantly inventing new machines- essentially for nothing. When seen on the scale of human history, indeed the human race has progressed greatly through industry and technology, among other factors. However, when seen on the scale of the infinite universe, man is tiny and trivial. Eventually, his impact will be overshadowed by the ways of the natural world. As a result of his destruction towards the world, man only accelerates himself to deterioration. In his story, Bradbury effectively shows that the universe does not revolve around man- in fact, that Sophist idea is farthest from truth.Works CitedBradbury, Ray. The Martian Chronicles. New York: Bantam Books, 1977.

Hazard of Industry for Environment. (2021, Oct 31). Retrieved from http://envrexperts.com/free-essays/essay-about-hazard-industry-environment 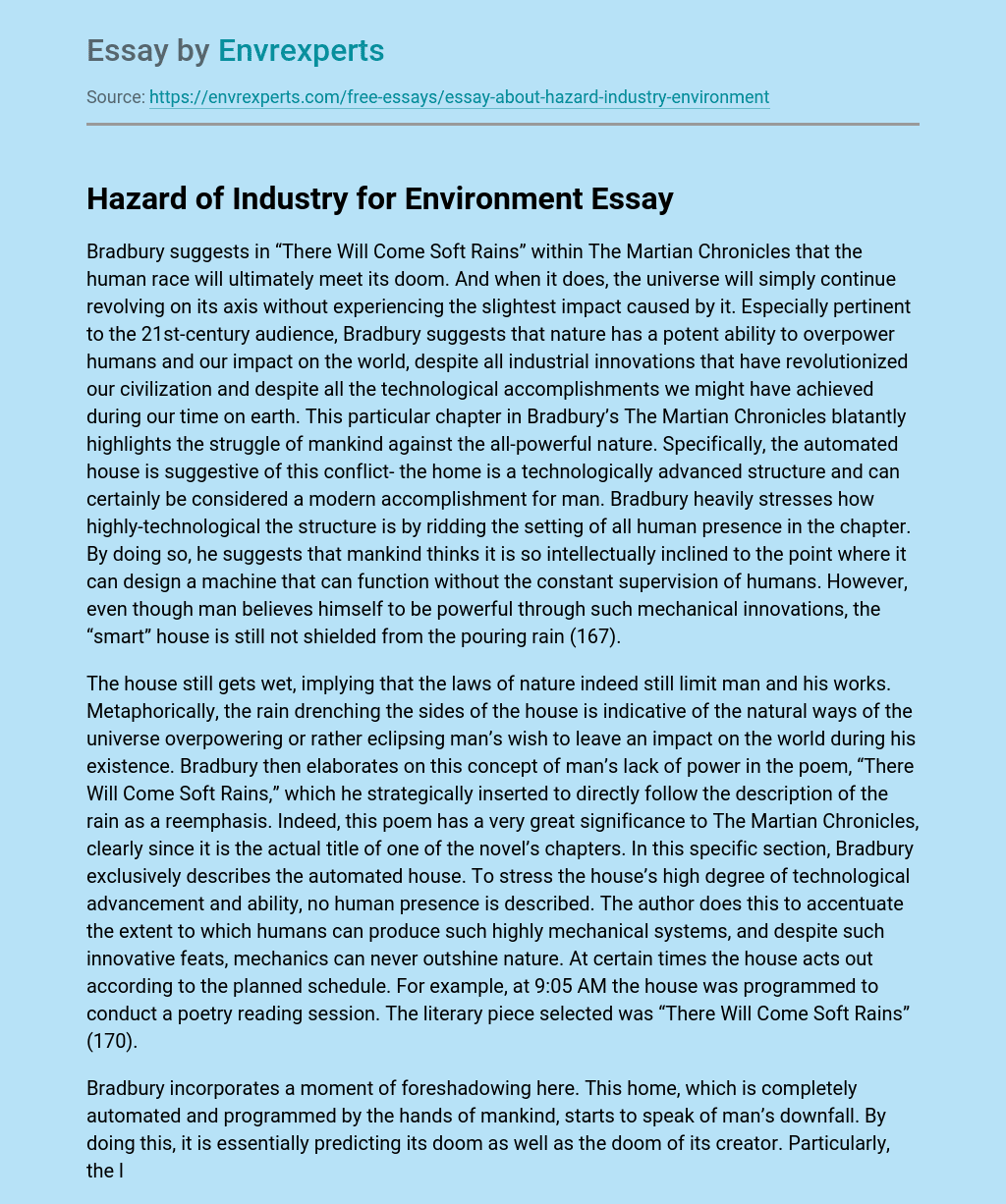