A History of the 1997 Kyoto Protocol

In the late '90s much of the developing world became concerned with a problem that had not gotten too much attention before- climate change. An international treaty known as the Kyoto Protocol was developed in 1997 in Kyoto, Japan when party leaders from around the globe met at a conference for the United Nations Framework Convention on Climate Change (UNFCCC). “Over 150 nations attended the conference and decided to adopt the first international treaty on controlling and reducing greenhouse gases” (CNN Library, 2).

Don’t waste time
Get a verified writer to help you with A History of the 1997 Kyoto Protocol
Hire writer
$35.80 for a 2-page paper

When the treaty was developed its main goal was to reduce greenhouse gases by making nations aware of the climate change problem in the world and rewarding them for reducing the manmade Co2 emissions that caused the problem to begin with. The protocol was introduced in two phases. The first "commitment” by the countries participating in the treaty was to lower their greenhouse gas emissions by 5 percent from the 1990 numbers between the years of 2008 and 2012.

“During the second commitment period, Parties committed to reduce GHG emissions by at least 18 percent below 1990 levels in the eight-year period from 2013 to 2020; however, the composition of Parties in the second commitment period is different from the first” (UNFCCC, 1). As of this year there are now 192 parties participating around the world. However, you will not find the United States included in this list.

One of the main reasons why the United States has still not hopped on board with the Kyoto Protocol was because of the Bush administration's decision to go against it.

During Bill Clinton's presidency, the original treaty was actually signed by the United States. But since there had already been an agreement passed by the Senate stating that they would not ratify any treaties that could put the country's economy at risk, the treaty was never ratified fully by our country. While President George W. Bush did acknowledge that climate change was becoming a problem in the United States as well as globally, he was hesitant to believe everything about it without more scientific backup. Bush also did not think it was fair that other large countries were excluded without question when the United States was heavily criticized for their decision to not join. "'The world's second largest emitter of greenhouse gases is China,' President Bush said. "'Yet China was entirely exempt from the requirements of the Kyoto protocol. India and Germany are among the top emitters. Yet India was also exempt from Kyoto'" (Sanger, 2).

President Bush's other main concern was how setting environmental limits would affect the nation's economy. He stated: “We account for almost 20 percent of the man-made greenhouse emissions, but we also account for about one-quarter of the world's economic output'" (Sanger, 4). Ultimately he decided that the possibility of an economic downturn was too great of a risk. He counteracted the Kyoto Protocol with a new proposal of his own in 2002. Bush proposed a plan that would not entirely lower the rate at which greenhouse gases were being emitted, but would simply slow it down. 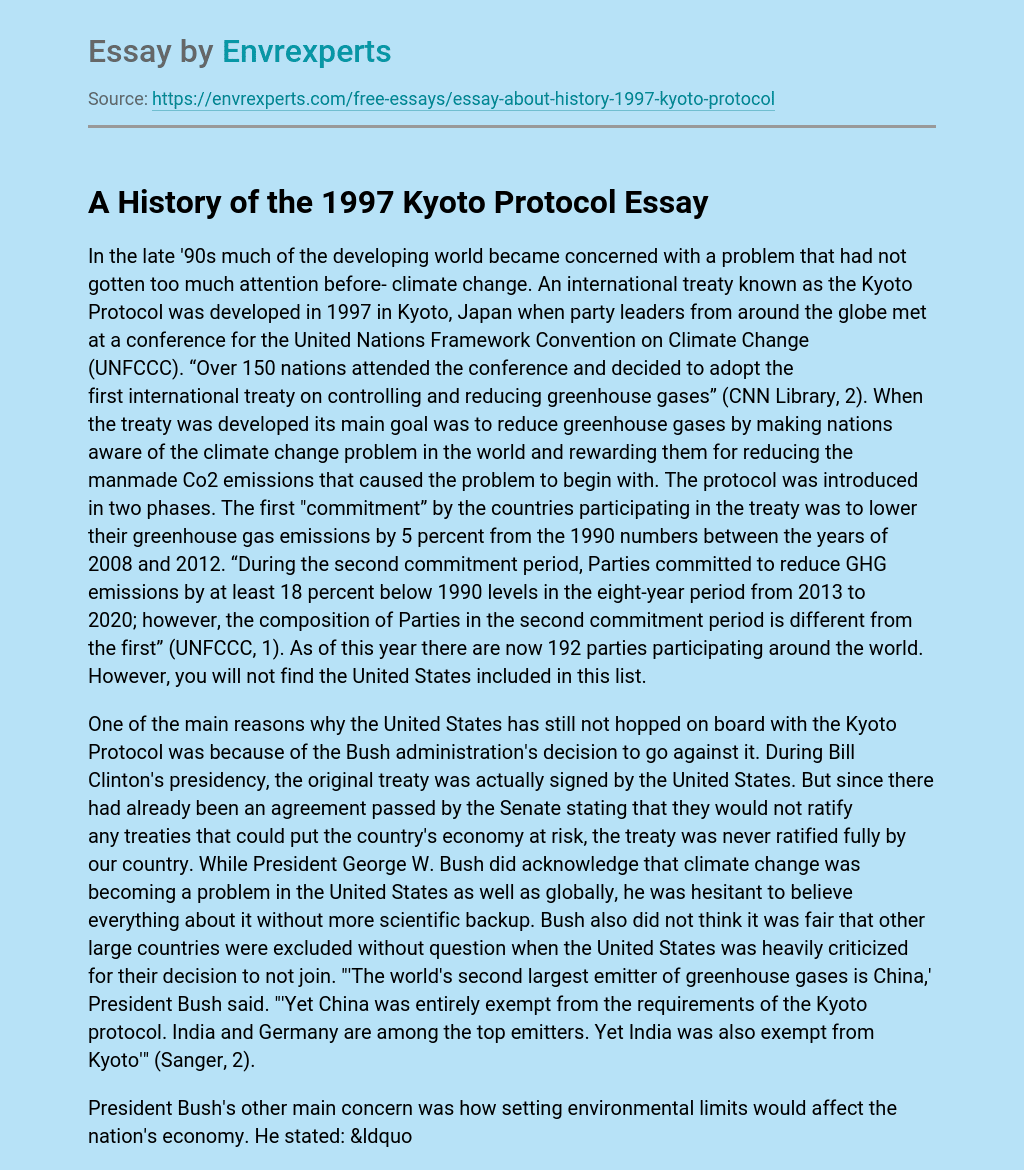