A History of Exxon Valdez Oil Spill in 1989

The Exxon Valdez oil spill happened on March 24, 1989. Although the story is still unclear on how the ship had gotten into this huge accident, it was very clear on what damage this accident had caused. The Exxon Valdez encountered iceburgs in the shipping lanes and the captain them advised another man to take over the steering of the ship that wasnt a licensed captain. The captain, when found, was intoxicated and had a significant amount of alcohol in his system. This lead the captain of the ship to become careless and impaired to handle to ship.

Don’t waste time
Get a verified writer to help you with A History of Exxon Valdez Oil Spill in 1989
Hire writer
$35.80 for a 2-page paper

Charges were laid against him and he then suffered the consequences. This accident was known to be the 34th largest spill worldwide, but is considered to be the number one spill worldwide in terms of damage to the environment. 10.8 million gallons of oil were spilled, so you can just imagine the damage done to the environment. The effect that the oil spill had on the local community was being in risk of consuming contaminated water.

Also the community pitched in to help with the clean up of the spill. When it comes to the environment, it was affected the most because of the damage done to the animals with their lives and reproducing as well as the water and the undersea life. Over 300,000 animals and billions of salmon and herring eggs were destroyed. The oil affects animals deeply because of the toxins embedded into their fur and if its consumed the animals could die because their consuming poison.

The oil spill affected the shoreline as well because it traveled as far as 1,300 miles.

Some actions that were taken in trying to clean up the spill was a hot water treatment. This was deemed popular until studies proved that this method was doing more damage than fixing the damage. The hot water treatment would destroy the organisms that naturally eat up all of the bad stuff from the oil. Another method was used called high pressure cold water treatments which involved dozens of people holding fire hoses spraying the beach. The oil would then become trapped and would be scooped up or sucked up. Another effective method that was used was a mechanical clean up. Using this method would expose oil underneath the beaches so it could be washed out. The beach was fertilized to promote growth of microscopic bacteria.

The beach now that was affected by the oil spill is doing much better and the species that were in danger are now somewhat recovered. Out of 23 species only 2 were declared recovered, so as you can see the environment is still going through some recovery. It may take a few years more for the beach to be back to its normal state, but this was a lesson well learned and society should see to it that this could be prevented.

A History of Exxon Valdez Oil Spill in 1989. (2021, Oct 31). Retrieved from http://envrexperts.com/free-essays/essay-about-history-exxon-valdez-oil-spill-1989 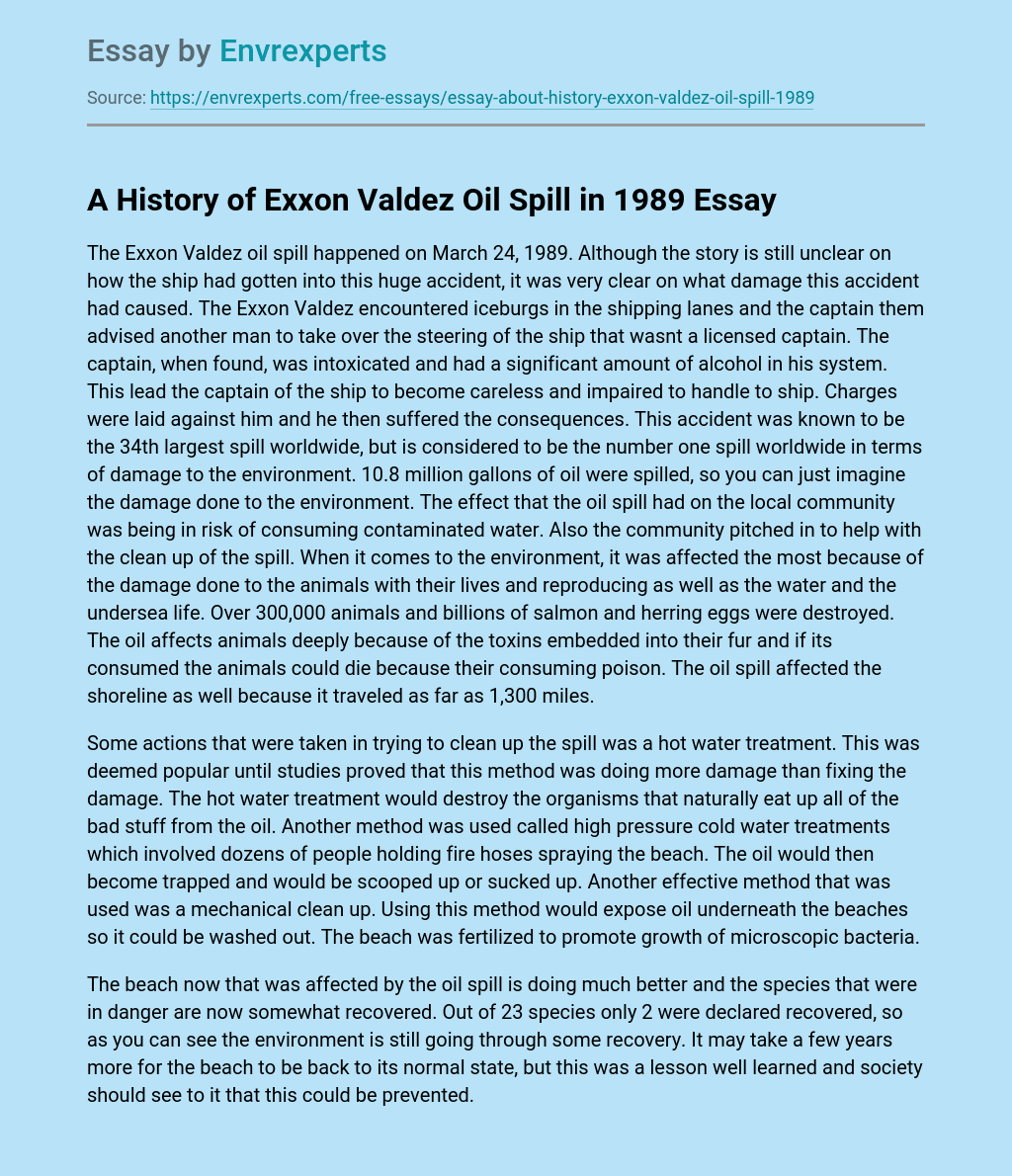