A History of Greenpeace

Greenpeace History The year 1996 is a year of celebration for greenpeace. They are celebrating their 25th year anniversary. Everything startde in 1969; Members were part of the Dont make a wave committee in vancouver. This committee was founded by Jim Bohlen. He was a forty-three year old American and was a composite-materials researcher. Another founder of the committee was Irving Stowe; he was a Philadelphia lawyer. A jew who had joined the Quaker religion. Paul Cote, a canadian lawyer in his mid twenties who had just gotten out of shool when he joined the committee.

Don’t waste time
Get a verified writer to help you with A History of Greenpeace
Hire writer
$35.80 for a 2-page paper

During this year, the United States had chosen to test its nuclear arsenal in Amchtka, which is a small island off the west cost of alaska. This was a home for many animals including eagles, falcons, endangered sea otters,etc…

These three men decided to produce means to end nuclear testing in Amchitka. Next they decided to sail a boat theyd name it Greenpeace because they wanted the earth to be green and yhey wanted peace.

It was Bill Darnell who came upwith that name. Suddenly, more peaple joined the commitee to stop nuclear testing in Amchitka, including Terry Simmons, a cultural geographer. Bohlen and Stowe were attracting journalist, columnist, writer, anyone who had somthing to do in the media.

It took them two years to get them ready for their journey towards justice for a land. Bohlen and cote were in charge of fiding a boat.

Meanwhile, Stowe took care of finding the money. He used contacts from the United States; he was a very serious man and did everything possible to get the money they needed, he even organized a benefit concert which made seventeen thousand dollars. The first boat they found Phylis Cormack was first seen as old and used that wasn't going to be capable of sailing to Amchitka, so they weren't sure of using this boat; it would carry twelve crew members and the trip would last six weeks. During this year the Dont Make a Wave committee changed their name to Greenpeace foundation. The day of the Greenpeace departure! re to Amchitka, it was allover the news , everybody wanted a story on it. During their voyage, they ran through some complications and the day they were supposed to be in Amchitka they were miles away from it. In that year, Greenpeace I (the Philys Cormack) and the Greenpeace two (the Edgewater Fortune) finally sailed toward Amchitka.

During their voyage, they stayed with the cree Indians who described to them the legend of (UNESCO Courrier, 1994:p38 ). From then they were looked upon as the Rainbow Warriors since their goal was to help the environment from unfortunate diasters. Unfortunately, their first voyage was defeated but the American government announced the ending of nuclear tests, whaling fleets, protection for seals, etc…. In 1972, Greenpeace III was sent (the Vega) to sail to Moruroa Atoll in France Polynesia to stop french atmospheric nuclear tests. On board of this boat David Mctaggart, a Canadian founder of Greenpeace. The french Marines reaction to the greenpeace boat was very aggresive so the Vega turned back to were it came from. But that wasnt the end, in 1973 , David Mctaggart went back but was severely beaten by the French Marine. Word got around fast and it was all the madia i gave a bad reputation to the French government. In 1975, France announced the of atmospheric blasting but transfers the testing underground.

A History of Greenpeace. (2021, Oct 31). Retrieved from http://envrexperts.com/free-essays/essay-about-history-greenpeace 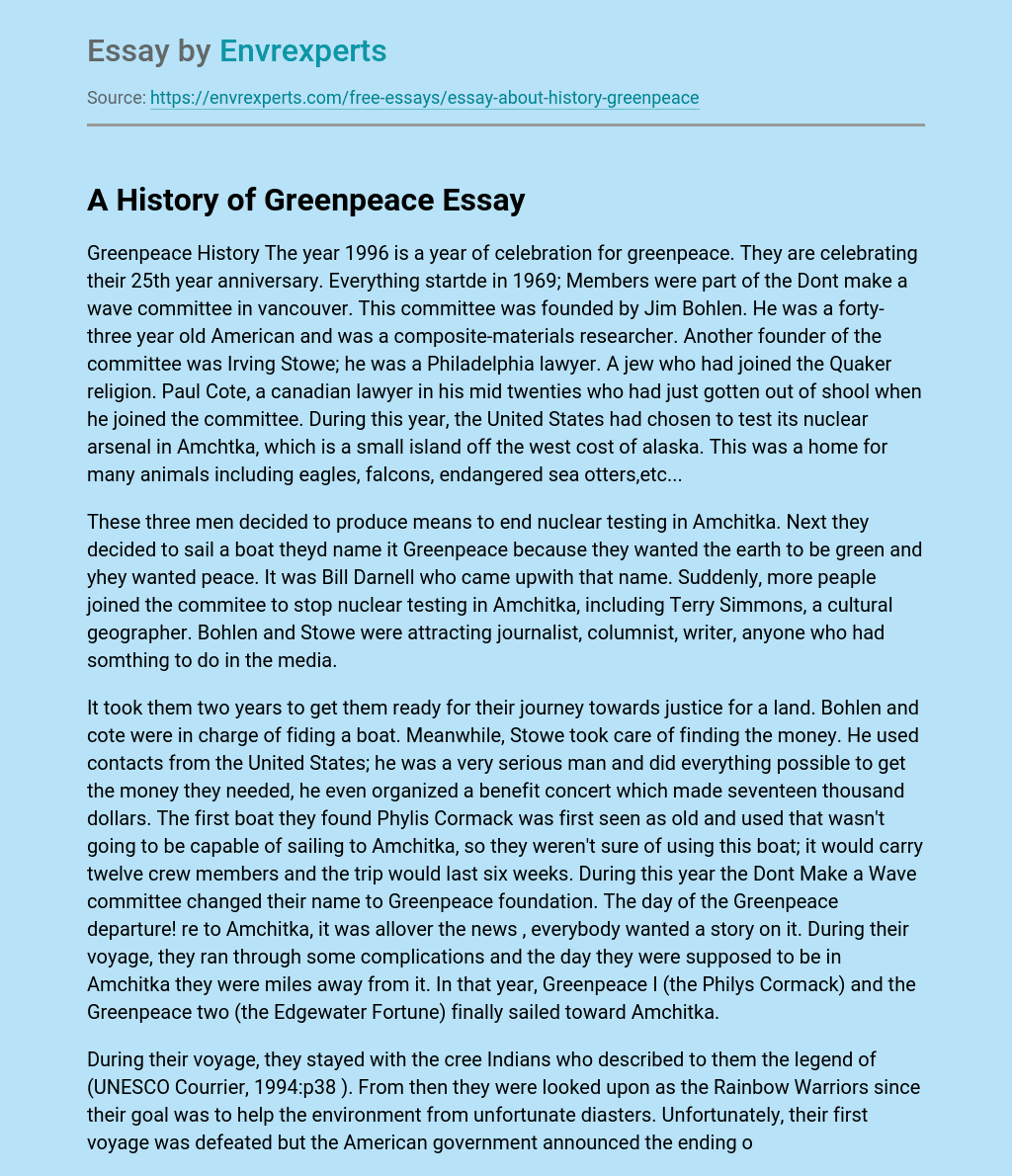