How Acid Rains are Formed

For acid rain to form, several different chemicals must be released into the air. The primary pollutants (sulfur dioxide, nitrogen oxide, and hydrocarbons) react with sunlight to create ozone. This produces sulfuric acid (H2SO4) and nitric acid (HNO3.) These acids are stored in clouds, and when it rains, you have acid rain. Another way acid rain can be formed is by the burning of Fossil Fuels. Fossil Fuels are coal and oil from decomposed trees and plant material from thousands of years ago.

Don’t waste time
Get a verified writer to help you with How Acid Rains are Formed
Hire writer
$35.80 for a 2-page paper

Fossil Fuels are burned to generate electricity, releasing pollutants into the air.

The places which get hit the hardest by acid rain are Norway, Sweden and Canada. But that doesn't mean that they are producing it all. Most pollutants that develop into acid rain come from Canada, Japan, the United States and Western Europe. Today, Britain releases almost as much sulfur dioxide as all of Western Europe combined.

Japan is the only country in which power plants are required to reduce nitrogen oxide by at least 75%, but the U.

S. also has new pollution standards. These require that all new cars have a convertor to reduce the carbon monoxide and hydrocarbons by as much as 96%. As I already said, acid rain does not always fall where it is produced. Often, the clouds that the acids are stored in get blown thousands of miles away. Acid can be transported not only by clouds, but by fog, gases, mist and dust as well.

All rain has a natural acid in it, that would be there even if we had never polluted the earth.

It is a type of acid from the carbon dioxide already in the air. This natural acid helps dissolve minerals, which lets plants use them more easily. The EPA, or the Environmental Protection Agency, tests water and determines the quality of it. Although they have tested much of the U. S., 78 % of rivers and 33 % of lakes are still to be tested.

The EPA also determines if the water they test is dead, impaired, or reasonably clean. Based on state reports, only 15 % of rivers and 38 % of lakes are not impaired. Out of an EPA list of 18,770 impaired water sites, only 529 of them are polluted mostly by toxic point sources. A toxic point source is pollution from just one source, and non-point source pollution is ground run-off from several or many different places.

A lake which is dead is a lake with absolutely no life in it whatsoever. By the early 1980s, tens of thousands of lakes were already dead. If acid rain is not stopped, 500,000 lakes will be dead before the year 2000. Acid rain is a major threat to all life everywhere. Measures have been taken to clean the United States' water, such as the Clean Water Act, a law passed in 1972. The CWA promised clean water for the entire U. S. by 1983. It has been 12 years since the deadline, but our water is still polluted. Another way to test water is the pH factor, which you could do at home if you had a kit. It measures water and other liquids on a scale 0-14, 0 being the highest acidity and 14 being the lowest.

How Acid Rains are Formed. (2021, Oct 31). Retrieved from http://envrexperts.com/free-essays/essay-about-how-acid-rains-are-formed 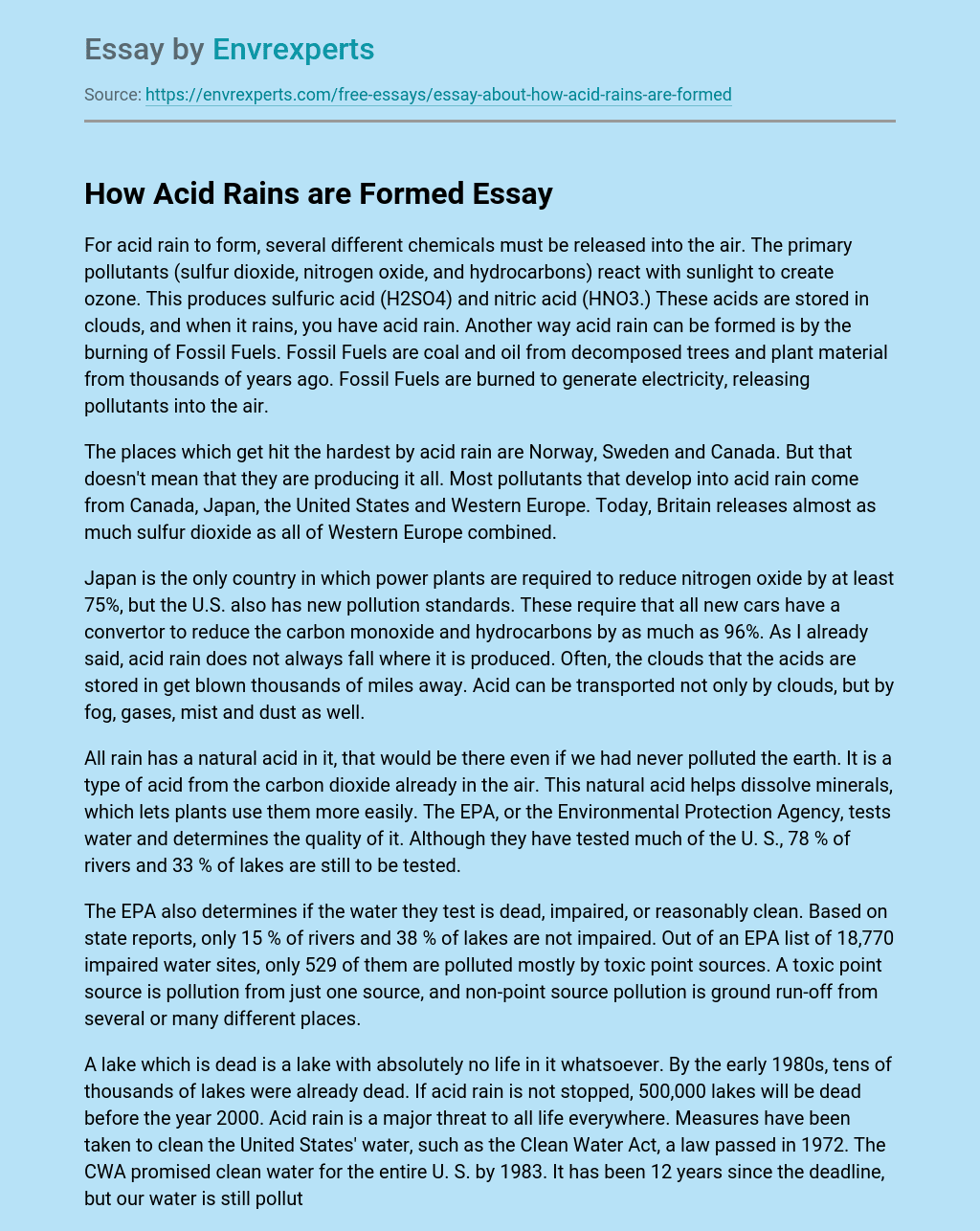