How Environmental, Economic, and Political Crises Will Redraw The World Map

Global Warring: How Environmental, Economic, and Political Crises will Redraw The World Map by: Cleo Paskal is a really interesting book. The book is divided is to 4 parts mostly looking at environmental change and the economy, Permafrost in northern communities, Partnership between countries overseas from Canada, and raising sea levels.

Don’t waste time
Get a verified writer to help you with How Environmental, Economic, and Political Crises Will Redraw The World Map
Hire writer
$35.80 for a 2-page paper

Cleo goes on to say that there will be many more storms similar to hurricane Katrina. It is shocking how much effect politics has on the environment by not paying attention to what is needed to keep the population safe from storms, natural disasters and raising sea levels. Cleo also mentions how the U.S government was not prepared for Katrina and will not be prepared in the future for a large natural disaster.

Part 2 of the book looks at events such as how there is no longer permanent permafrost in the north which is a main resource used for living in the northern part of North America. They have built pipelines on these permafrost zones. With those zones now melting the pipelines are now being damaged costing significant amounts of money to fix and resulting in looking to relocate these pipelines because what was permafrost at the time is more like a swamp.

The most interesting information I gained from reading this book is about that in most northern parts of the world, it is the most traveled shipping route that everything passes through from a bag of coffee to a brand new car from Germany. With the artic ice now melting this passage is becoming bigger and therefore more valuable to the world. It is currently protected by Canada but Cleo and some of the people she interviewed do not believe Canada has the power to protect these waters and therefore The US and UN should step in and come up with a plan to keep these waters remain safe. Also mentioned in Part 2 is the great cold rush of '08 which talks about how the artic definitely needs to be more secure. (Pg. 65-128)

Part 3 of this book is about how partnerships are forming between China, India, and the west. As new passages open as a result of the ice melting new trades and opportunities are bring created for these countries. Making it easier for them to assess one another and also export and import goods over seas. I found this part of the book very straightforward and not as exciting as the rest of the book. It was a very short part and mostly talks about overseas countries. (Pg.129-188)

Part 4 of Global warring is the part that I found most interesting. Although reading parts 1 and 2 were also interesting I found that I foresee some of the events Cleo talked about happening over the next few years affecting the whole world. “ If just 15 percent of Greenland's ice sheet melts, that would be enough to put much of Florida, Bangladesh. Nile Delta, and the Netherlands (just to name a few low-lying regions) under water"(Pg. 192). This really stood out to me, knowing that ice is contently melting, along with the rising sea levels this 15 percent of the ice melting in Greenland could very well happen sooner then people think. This would put many people out of their homes, and only could have a huge impact on the world's economy. One other part that I find we could relate to is how it goes on to talk about how 60 percent of the world's coral reefs could be dead in the next 10 to 30 years. Who is to say that this will not affect the economy in Cape Breton where fishing is one of the biggest employments? And will have a significant effect on the economy. Now with the coal mines closed and the decline in the fishing industry. It begs the question “What will happen to the people of Cape Breton?”(P.189237)

Cleo Paskal the author of Global Warring is a very successful writer; she has won multiple awards with this book including the Grantham Prize Award of Special Merit. Cleo Paskal is an Associate Fellow at the Royal Institute of International Affairs, Chatham House, London, as well as Adjunct Faculty in the Department of Geopolitics, Manipal University, India and in Global Change, SCMS Kochi, India”(Huffington Post). She is an author who is very involved and well respected in the writing community! Cleo has contributed to everything from The Sunday Times, Huffington Post in a addition to hosting BBC radio shows. It is obvious by reading this book you can tell that Cleo is very intelligent and well informed in the area of global warming.(Huffington Post) The language, the styles of writing, the topic, the length of the book  Overall Global Warring: How Environmental, Economic, and Political Crises will Redraw The World Map was an interesting and simple read. There were a few words in the book which I did had to go online to determine the meaning or find additional information. I enjoyed the topic of the book I found most every parts very intriguing with the exception of part 3 which was somewhat dull in my opinion. The length of the book was perfect with only 240 pages and packed full of information that made you want to keep reading! Did you obtain any information from the book that related to your other courses? Overall this related to not just my courses but also the entire business program, as it talks about everything from overseas trades, economic problems and population. It mostly narrows on economics, which would relate to my micro, and macroeconomics course I had taken last year. I didn't show much interest in theses two courses while taking them but I find after reading this book it has increased my interest of events that happen in the world economy. One ironic thing in the book on page 245 where it mentions the possibility of higher taxes for automobiles with higher emissions. This made me think about the Volkswagen scandal. Would the consumer end up paying higher taxes as a result of Volkswagen lying to the customers or would the taxes be pinned on Volkswagen?

Did you learn anything new from the book?

This book by Cleo was packed full of information from an economic view on global warming, and the dangers to the shipping passages of the world. The most interesting thing I learned was about how much global warming is affecting not only life but also the economy as the planet gets warmer and the ice melts, hurricanes are created as the result of warmer water. When a hurricane hits such as Katrina it costs astronomical amounts money from everything to rescuing the survived and rebuilding the city or cities that were impacted. I also learned about the three R's Cleo mentioned in the book which I found
very accurate and interesting “ Reinforce- shore up defenses by adapting to new conditions before the crises comes. This can include sound assessments of threats, appropriate city planning, good implementation of existing plans, the construction of communication links and the enactment of suitable regulations, thereby ideally heading off the disruptive events before they can happen—or at least dampening the impact Rescue- Marshall and effectively manage the whole range of emergency services if a crisis does occur to best mitigate the trauma and damage Recover- implements a long-term regional recovery plan to lessen the disruption, especially during a prolonged stress period such as a drought. This has the added benefit go restarting the process of reinforcing.”(Pg. 239) I believe these 3 stages are key to protection of our people, world and economy in the event of another crisis.

In conclusion Global Warring: How Environmental, Economic, and Political Crises will Redraw The World Map by: Cleo Paska is an excellent read. It gives people another view on global warming that we wouldn't normally think of when we think of this subject. The truth is there are potential danger events to not only our human life but also the economy of the world. People might think that new shipping routes are a good thing, which in some cases they are but that's until countries start wars and enemies over the passage like they had with new passages in the past. Our economy is in great danger from this and also the hurricanes to come. Billions of dollars will be spent on recovery, rescue and refugee camps. We need to go back and follow the 3 R's and prepare for the worst because according to Cleo its about to come. Its not a matter of if but it's a matter of when.

How Environmental, Economic, and Political Crises Will Redraw The World Map. (2021, Oct 31). Retrieved from http://envrexperts.com/free-essays/essay-about-how-environmental-economic-and-political-crises-will-redraw-world-map 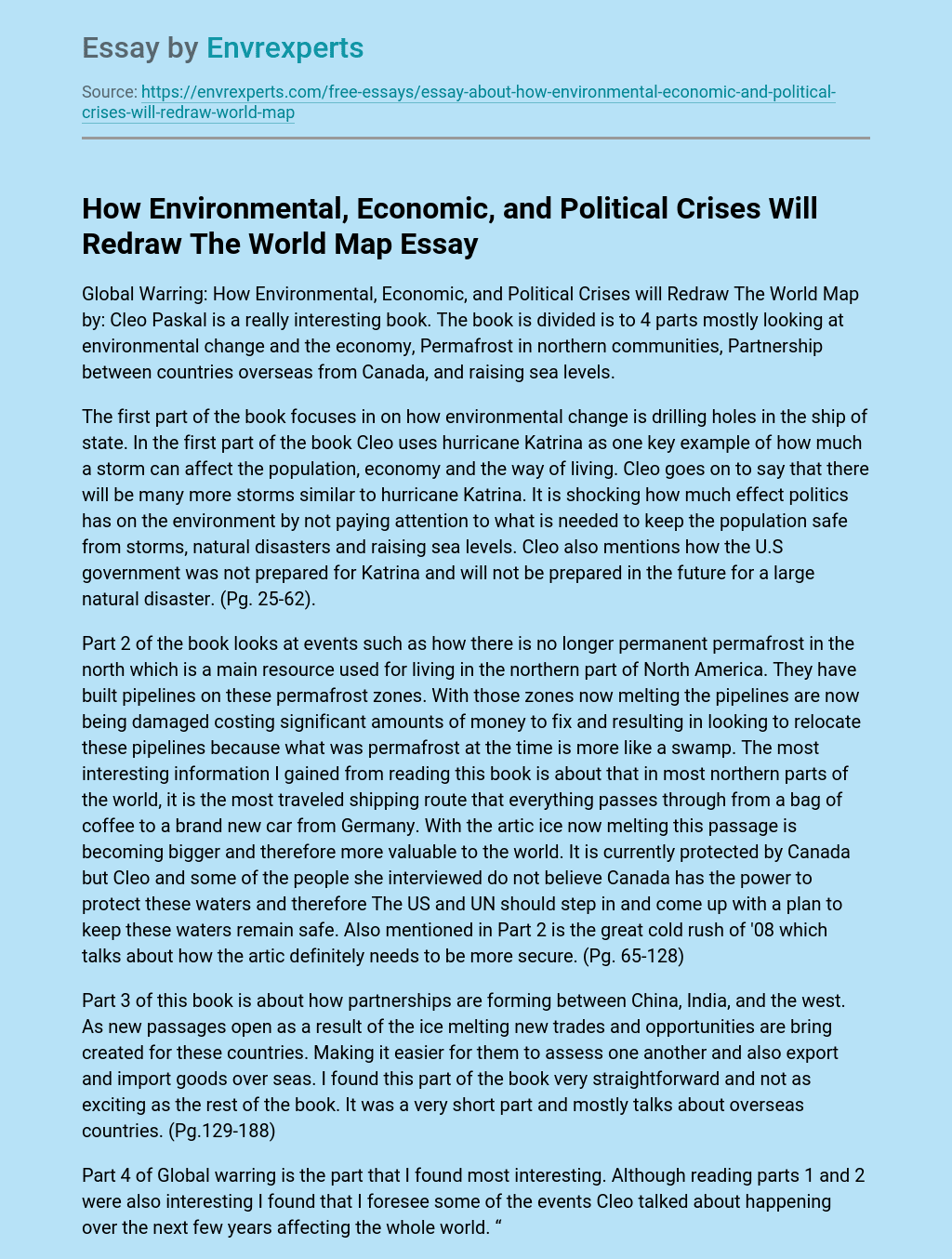