How the Environmental Issues in The List Correspond With Real Life

The current view on climate change has certainly changed from the 1800s, but the fact remains that something is wrong, and it is our fault. Today, there is a lot more action being taken, but it is not nearly enough. Due to the ignorance of the human race, we and many other species are suffering at the hands of extreme events, sea levels rising, shrinking ice sheets, warming oceans, and global temperature rise.

Scientists have predicted many things about the effects of global warming.

Don’t waste time
Get a verified writer to help you with How the Environmental Issues in The List Correspond With Real Life
Hire writer
$35.80 for a 2-page paper

“Climate models predict that Earth’s global average temperature will rise in the future. For the next two decades warming of about 0.2° Celsius is projected. If we continue to emit as many, or more, greenhouse gases, this will cause more warming during the 21st Century than we saw in the 20th Century.” (“Predictions of Future Global Climate”). This means that the Earth’s temperature will continue to rise, so long as we keep doing what we’re doing.

The problem with that is, more ice will melt and the ocean’s sea levels will rise, which would cause flooding. By the time we reach 2100 sea levels could have risen by about three feet, 10% of the population would have to move or die, due to flooding, and that would also have an effect on animals.

Flooding would also affect their habitats. Scientists also predict that if we continue to ignore the crisis, a great many animals will go extinct, and the growing season will lengthen.

“The longer the time without a frost, the longer the growing season. While this may seem good — more time should lead to a larger crop yield — it could actually have detrimental effects on the crops we grow. Warmer weather helps pests survive longer which can wreak havoc on crops. Rising temperatures are also expected to contribute to a shift in which areas are most agriculturally productive and what crops grow there” (“Climate Change Increasing Length of Frost-Free Season”).

I’ve found one example of what describes how people are reacting to the crisis:

“Even as heat records are shattered on a monthly basis and the world’s glaciers and ice sheets melt, climate change remains a divisive issue in many parts of the world. Some 70 percent of Americans believe that climate change is happening, yet only half understand it is driven by human activities, and some think it is not happening at all. Many of those who do accept climate change struggle to cope with the scale and severity of the issue” (“Predictions of Future Global Climate”).

A big problem with this is most people aren’t educated on the matter, and a lot of people don’t care. A lot of people are also being taught that it isn’t a big deal, while others decide to remain ignorant because of how much of a problem it actually is and solving the problem seems like too much work.

This relates to The List, by Patricia Forde, because the problems weren't solved due to people being told that it was fine, and the fact that it reflects our world just goes to show that ignorance really is bliss.

Noa seems to have the idea that words are the main source of evil due to politicians using words to make the people think that everything was alright.

Though a lot of people say it is already too late, and there is a possibility that they are right, it's better we try to improve than to make it worse because maybe we can prevent anything like the scenario in The List.

A lot of people have also become depressed, feeling hopeless about the situation. Two men by the name of Jimmy Donaldson and Mark Rober started a TeamTrees fundraiser where people can donate to plant trees. The goal was 20 million dollars to plant 20 million trees. So far, they have about 6.5 million dollars.

There are things being done to help stop the climate crisis, but the amounts of pollution we’ve made already have had tragic effects. In 2017, it was reported that the great barrier reef had died. By putting in a full effort to help them recover, it would take about five to ten years.

Just that people still believe the climate crisis isn’t that big of a deal, despite the fact that we’ve managed to kill the largest living organism on our planet, is something astounding.

In this day and age, you see the terms “global warming” and “climate change” quite often, if you are not living under a rock. But it wasn’t until 1975 that “global warming” would appear in an academic journal. And even then, there was certainly no rush to do anything about it. ‘Famed Nasa scientist James Hansen would not testify before Congress that “global warming has begun” for another 20 years. And the US would not enter into – only to later pull out of – the Paris climate accord for nearly half a century.” (Finnegan)

Even though we still have many people who deny the facts, it was a lot worse twenty or more years ago, and that had a lot to do with politicians feeding us false information.

Because of this, “ virtually all climate scientists agree there is little or no chance the world can stay within the goal of 1.5C, the limit of what scientists believe to be safe.” (Finnegan)

If it weren’t for us taking so long to realize that something actually is wrong, we could have had a much bigger chance at solving the problem. And even today, people still think we are far from the edge, and that is still partly due to our subtle worries being soothed by blatant lies when really, we are literally on the brink.

We’ve failed to notice just how much time we’ve taken, and that was a fatal mistake.

Although, it wasn’t really all our fault, as so many people weren’t properly educated on the matter, just like in The List. I almost wonder if what happened in the book is what comes after. If this is the calm before the storm. If this will be the thing that ends us, not now, but for our future generations. In the comment’s section of the donation website for TeamTrees, a woman donated three dollars to plant three trees, and she commented: “I want my grandchildren to know this world.”

It’s actually a terrifying thing, to know that there is a chance that my grandchildren might not know the world as I do. That they might have to breathe different air than I do, to drink different water than I do. To think, their rainwater is so polluted it is almost undrinkable.

I don’t know who in their right mind would continue polluting after taking in the possibility that their grandkids might grow up and have to breathe polluted air, but being so close to the brink, it’s hard to be surprised anymore.

Given the evidence supported by most scientists, I do think something like what happened in The List could really happen, and that scares me because I want my future generations to know the world I know, and maybe a slightly better one.

How the Environmental Issues in The List Correspond With Real Life. (2021, Oct 31). Retrieved from http://envrexperts.com/free-essays/essay-about-how-environmental-issues-list-correspond-real-life 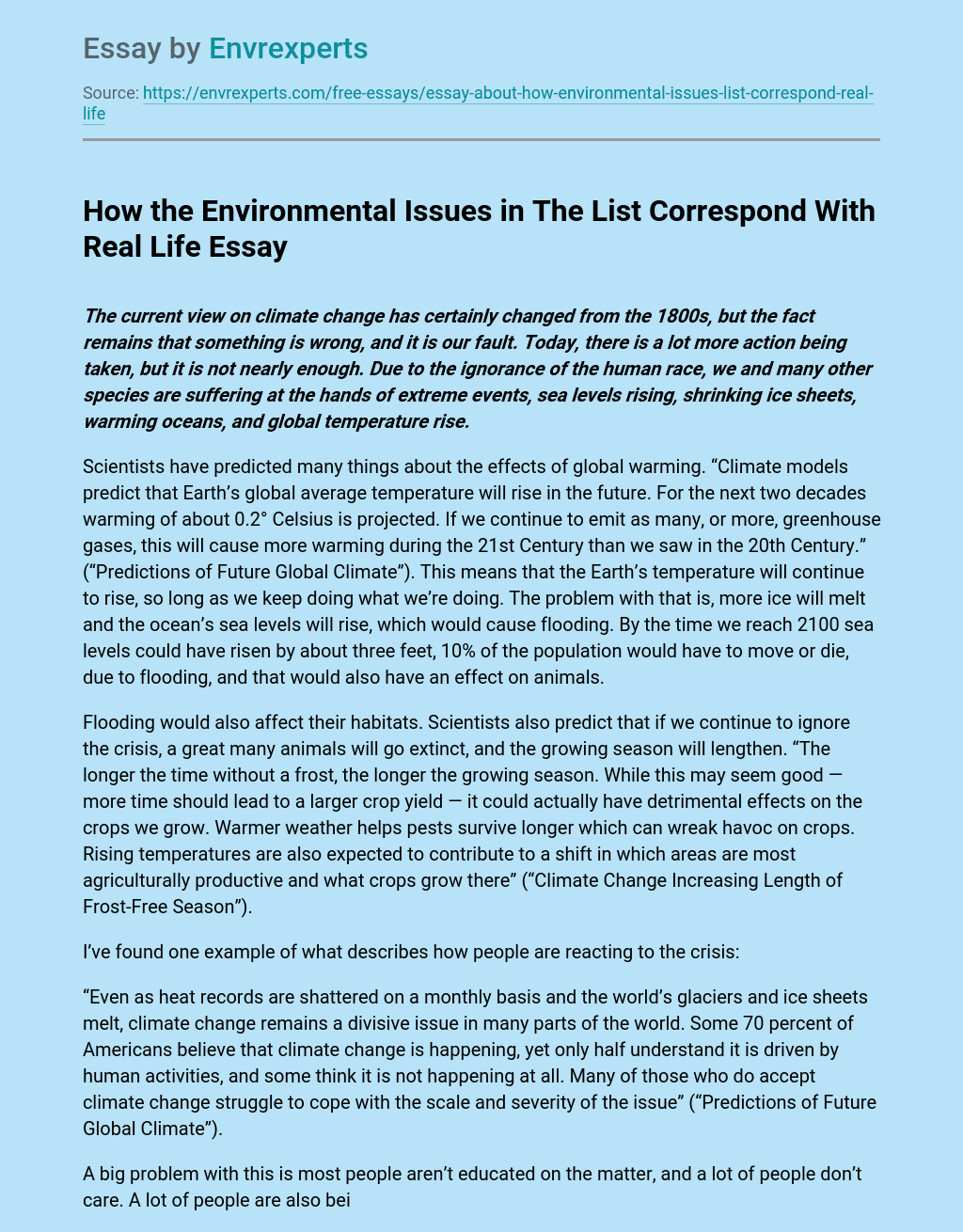