How Natural Resources Are Used For Plastics

Summarise some of the natural resources that are used when making plastics.

Don’t waste time
Get a verified writer to help you with How Natural Resources Are Used For Plastics
Hire writer
$35.80 for a 2-page paper

1a – Emissions and Climate Change – The combustion of crude oil leads to an increase in the abundance of carbon dioxide emissions and other greenhouse gases. Studies have shown that a rise in carbon dioxide causes an increase in the temperature of the atmosphere. The burning of crude oil for transport, domestic and industrial uses are one of the major causes of air pollution.

The inevitable consequence of burning crude oil is carbon dioxide; although, there are also other by-products such as nitrates and carbon monoxide. These by-products react with the environment producing ozone and other greenhouse gases. These negative effects are a result of an increase in air pollution, causing temperatures to rise. The atmosphere returns 30% of the arriving radiation waves and remains with 70% for warmth. Nonetheless, an addition to the amount of carbon dioxide in the atmosphere operates as a “blanket” to the increased heat.

As a result, the longer wave radiation gets trapped in the atmosphere, where there is already a high concentration of carbon dioxide causing a further increase in temperatures. This contributes to global warming, which consists of changes in rainfall patterns, melting of glaciers and changes in sea levels.

1b – The Disruption of Wildlife Migration Paths and Habitations – Ecological systems are extremely intricate and can be a victim to serious environmental penalties when disrupted by human activities. The increase in traffic at oil drilling regions contributes substantially to noise pollution in the habitats of animals. Wild animals tend to react to noise disturbances with evasive actions, but research has come to prove that such actions eventually become habitual. Negative effects include disruption of communication between songbirds during procreation and nesting times, they also impact the food web. Animals that have adapted to traffic have high probabilities of getting killed on roads.

1c – Waste Oil – Waste oil is crude oil-based products that, through contamination, has become unsuitable for its original purpose due to the presence of impurities or loss of original properties. Waste oil contains a breakdown of products and contaminated impurities from usage. A lot of the problems that are connected with the extracted petroleum are also associated with waste oil ends up travelling into water channels. The oil becomes toxic to both the soil and water for consumption. Rainfall also moves the waste oil to larger water bodies thus contaminating them too.

1d – Oil Spills and Pollution – Big oil spills are known killers of wildlife. Smaller spills, including of other substances in the oil extraction process, don’t always make the headlines but can also be dangerous. During oil extraction on land, drilling fluids are injected into the well for lubrication. These oil-based fluids known as \"mud\" are supposed to be captured in lined pits for disposal, but they’re often spilled and splashed around the drilling site. These spills can have long-term environmental impacts and devastating effects on animals through direct contact, inhalation, and ingestion of toxic chemicals. Oil and chemical spills can damage animals’ liver, kidney, spleen, brain or other organs, cause cancer, immune system suppression and reproductive failure, and trigger long-term ecological changes by damaging animals’ nesting or breeding grounds. Furthermore, oil and gas production are among the main contributors to air pollution. When fossil fuels are burned by power plants, vehicles, and modern facilities, they generate toxic gases. Breathing this air can result in respiratory problems such as asthma, cardiovascular diseases, developmental issues, and even cancer. Finally, the drilling method of hydraulic fracturing is known for contaminating drinking water sources with chemicals that lead to cancer, birth defects and liver damage. The controversial method injects a mixture of water and chemicals into rock formations to release oil and gas. As a result, it generates huge volumes of wastewater with dangerous chemicals that can leak to ponds, lagoons, and underground aquifers.

2 – Natural gas only negatively affects the environment in one main way; air pollution.Cleaner than burning than other fossil fuels, the burning of natural gas makes insubstantial levels of sulphur, mercury, and particulates. Atypical natural gas development can affect local air quality. In some areas where drilling occurs, increases in concentrations of hazardous air pollutants and two of the six criteria air pollutants regulated by the United States Environmental Protection Agency (EPA) because of their harmful effects on health and the environment have been experienced. Furthermore, although natural gas emits 50-60% less carbon dioxide (CO2) when burnt than coal, the drilling and collection of natural gas from wells and its transportation in pipelines results in the accidental discharge of methane (CH4), a primary component of natural gas that is 34x stronger than CO2 at trapping heat over a 100-year period and 86x stronger over 20 years.

3 – Of the three fossil fuels, coal has the most severe affects on the environment. Coal impacts the environment in two main ways; explosions and emissions.

3a – Explosions – Methane gas that occurs in coal deposits can explode if it concentrates in underground mines. This coalbed methane must be vented out of mines to make mines safer for workers, and local fauna and flora. Methane is also one of the strongest greenhouse gasses, 86x stronger than CO2 over 20 years.

4 – Talc (Mg3Si4O10(OH)2), wollastonite (CaSiO3), and cellulose ((C6H10O5)n) all have no negative impacts on the environment when being harvested. Despite this, talc and wollastonite are both non-renewable resources as they cannot replenish their supplies in a short amount of time.Q3 – Discuss and analyse some solutions scientists have employed or are looking at employing to help reduce the waste being produced by plastics.

How Natural Resources Are Used For Plastics. (2021, Oct 31). Retrieved from http://envrexperts.com/free-essays/essay-about-how-natural-resources-are-used-for-plastics 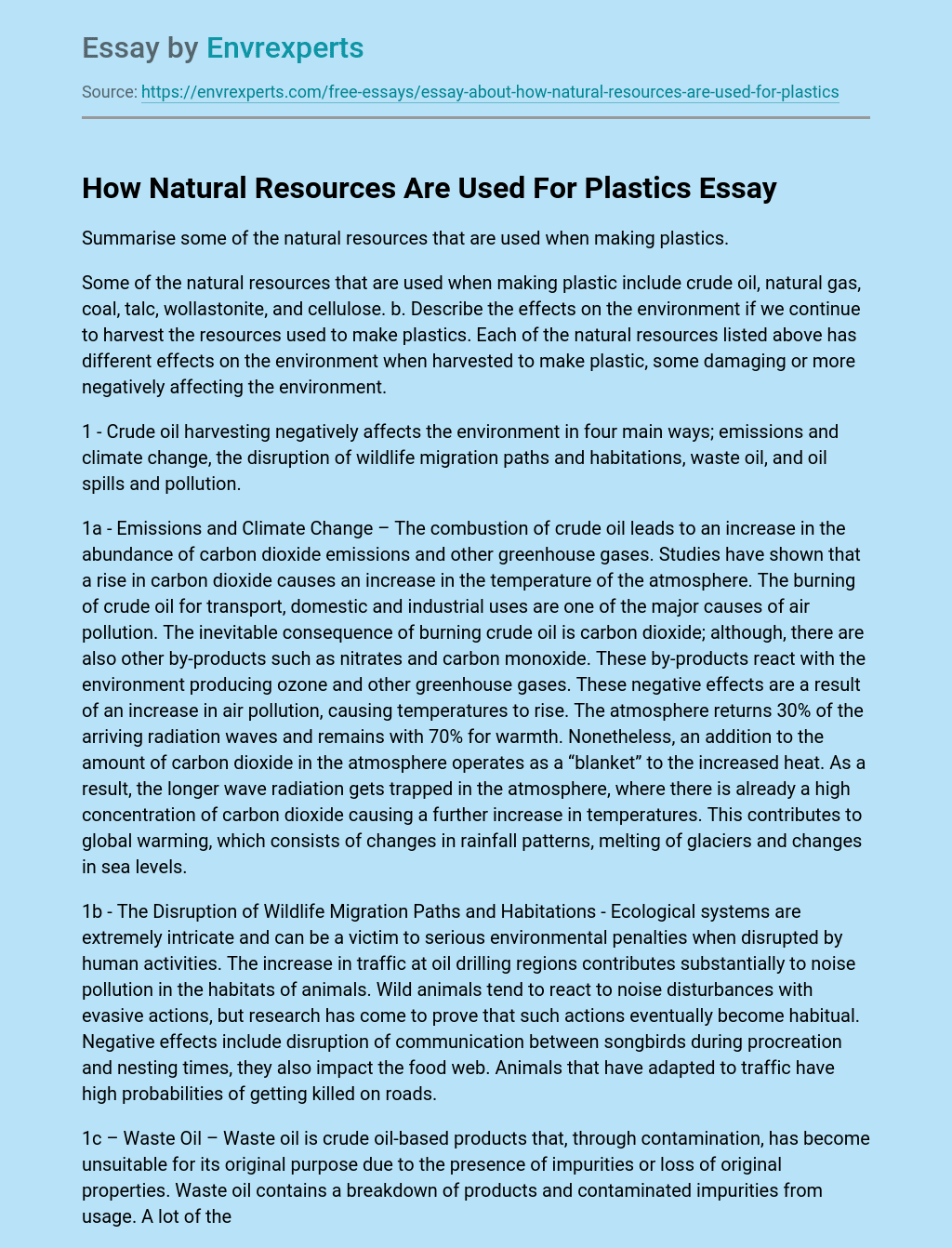