How to Solve Water Pollution Problems in China

The earth is an awesome place for exploring. When we look at the globe, we can see most of the earth is covered with blue color. It shows that there is plenty of water on earth that we should never worry about that. However, according to “Water Pollution” (2015), “Although most of the planet is covered with water, more than 97 percent of it is ocean-saltwater that is not drinkable or usable by humans. Of the remaining 2.5 percent of water that is freshwater, more than two-thirds is locked up in glaciers, snow, and permafrost.

Don’t waste time
Get a verified writer to help you with How to Solve Water Pollution Problems in China
Hire writer
$35.80 for a 2-page paper

” We can see that drinkable water is not that rich. We are facing not only a water shortage nowadays, but also very serious water pollution issues especially in China.

To make things easier, let us just focus on something in our daily life and think of our daily routine. Every day, we get up brush our teeth, wash our face and go to the bathroom. Where does the water go? As we all know, most people in the United States and other developed countries have access to sanitation facilities. However, in developing nations such as China, the waste of humans and animals are simply flushed away into rivers. This disgusting action not only pollutes the water, but also possibly causes diseases, so people who live around those rivers will be affected bad.

Then, we have breakfast, lunch and dinner. In the last decades, advances of technology and variety of foods have made it possible for people to eat almost whatever they want. It seems like this is very good for people but in reality that is not the case. It is strongly connected with agricultural water pollution. Furthermore, along with rapid economic development, people are wealthy enough that they do not need to worry about the basic needs, so they start to collect diamonds, gems and other scarce resources for their jewelry collections. This is another kind of water pollution from fracking. Therefore, there is a strong connection between all these our daily activities and water pollution. A good question is that why we need to care about water pollution and how can it affect us. The effects of water pollution are numerous and it can not only affect the quality of our drinking water, but also cause diseases and make beloved animals endangered by destroying the
food chain. There are three typical kinds of water pollution and here is what can we do in order to solve them.

First, when it comes to the household pollution, we have to know that everyone can make a little change in order to create a better world. For example, China has such a huge population that the Chinese can make a big difference if they want to. With the huge amount of population, if every person makes only one difference daily, e.g., switching from driving to walking or cycling when going to nearby places is not a difficult thing, and this benefits not only the environment, but also our physical fitness level. When we walk further into villages, we can see trash mountains and rivers around them are totally polluted, and there are even people fishing there. Imagine how China will look like decades of years later, probably a huge amount of people die for cancer and strange diseases. Therefore, the government has to take action. My suggestion is that they can create regulations to restrict individuals and give rewards such as to elect the most environmental friendly person in the community or even the city and let people celebrate it. Also, the government can give subsidies for people who separate the trash correctly because most people do not take any action if they think there is no benefit for themselves. And considering the difficulties of dealing with people in China, there has to have the role of government in order to solve the problem. Plus, Chinese government should definitely apply
sewage water treatments as soon as possible. And in some other rural countries, there is new equipment that utilizes rainwater as water supplies. According to Engineering Solutions. (2013),

"In economically water scarce regions (e.g. Central Africa) the problem lies not in a lack of resources and precipitation but in water distribution systems. In these regions, implementing the use of rainwater harvesting will provide a way to capture unused precipitation in both rural and urban cases.” So that people in those rural places can even get good access to water. Moreover, agricultural pollution should be treated as a very serious problem nowadays around the globe. Basically, there are two kinds of farming which is modern industrial farming and factory farming. For industrial ones, it is more directly connected to water pollution. According to “Major pollutants associated with agriculture”, major pollutants are “Nutrients, ammonia, Hydrogen sulfide, Methane, Odor and Pathogens”. Simply, farmers have to use pesticides and other kinds of chemicals in order to successfully grow foods these years. Plants are based on soils and soils are close to water, therefore, those chemicals dramatically flow to the rivers and secretly influence the dangers of utilizing the water. And there are ways to solve these problems. Farmers should switch to smart agricultural practices and reduce the amount of pesticides they use. There are even some smart farmers are testing new ways of farming in China. These farmers leave a special land for insects to eat and guide them, tell them that they can eat at those parts safely. And not using any pesticide at the rest, other insects gradually know that where they can eat and where cannot. And as a result, they grow very delicious and organic vegetables without using any chemical. Factory farming, which put all the animals into cases in the factories in order to provide enough food for humans, is not only mean, but also wastes and pollutes the water. You probably cannot understand why some people do not want to eat the factory-based meat if you have not been to a farming factory. Basically, those animals cannot even see the sunlight until they die, and their whole lives are in very crowded cages with their same species with stressful, angers and all the bad emotions. The amount of water to raise these animals is huge. There is a fun fact that a vegetarian who drives a car is more environmental friendly than a meat eater who uses public transportation only. Along with the wastefulness of people, factory farming must be one of the tremendous water consumers. Instead, people should buy organic foods and eat less meat. If the requirements of meat decrease, the factory will decrease the amount of food it produces and then cause better effects.

Furthermore, industries are always causing pollutions. We always see water around industries in very terrible conditions, but nobody does anything about it. Chemicals and industrial waste goes into the groundwater supply and causes water pollution. According to “Sources of Water Pollution” (2007), industrial pollution such as “pulp and paper mills, chemical manufacturers, steel plants, metal process and product manufactures, textile manufactures, food
processing plants" are poisonous to water. On December 3, 1984, in Bhopal, India, according to the Goldman Prize, “more than 27 tons of poisonous gases leaked from a storage tank at a Union Carbide pesticide factory into the heart of Bhopal city, immediately killing 8,000 people.

Multiple studies have found mercury, nickel and other toxins in the local groundwater and dangerous levels of toxins including lead in the breast milk of women who live near the factory zone." If an unexpected industrial disaster happens, the water around is poisonous enough to drink. Mining and fracking pollutes a huge amount of water as well. Sometimes, they even cause dangerous problems to humans. Mining exposes heavy metals and sulfur compounds out, and rainwater brings them to freshwater supplies, which can directly affect our health. According to Water Pollution, (2015), "In 1996 an accident caused 1.5 million cubic meters of industrial waste to leak into a river, killing all living things for several miles. In 2014 seven thousand gallons of a toxic chemical leaked from tanks at a company into the Elk River in West Virginia, contaminating the drinking water for the city of Charleston”, which is very dangerous. These
examples are very serious and dangerous. In order to avoid these disasters happen, the government has to restrict and inspect on industries very strict. The government has to take most of the responsibilities and cannot ignore even one industry.

In conclusion, water pollution is a very serious problem right now. Along with the importance and indispensable role of fresh water in our life, we should realize why we have to save water now. From a single person to the government, there are various ways for us to improve our own environment and water quality. If every single person contributes a little and takes some action, the water condition will change totally. If governments pay more attention, give subsidies and set more restrictions about using the water, people will have to change to save our planet. We have to take action as soon as possible; otherwise, a tremendous environmental crisis will be coming soon.

How to Solve Water Pollution Problems in China. (2021, Oct 31). Retrieved from http://envrexperts.com/free-essays/essay-about-how-solve-water-pollution-problems-china 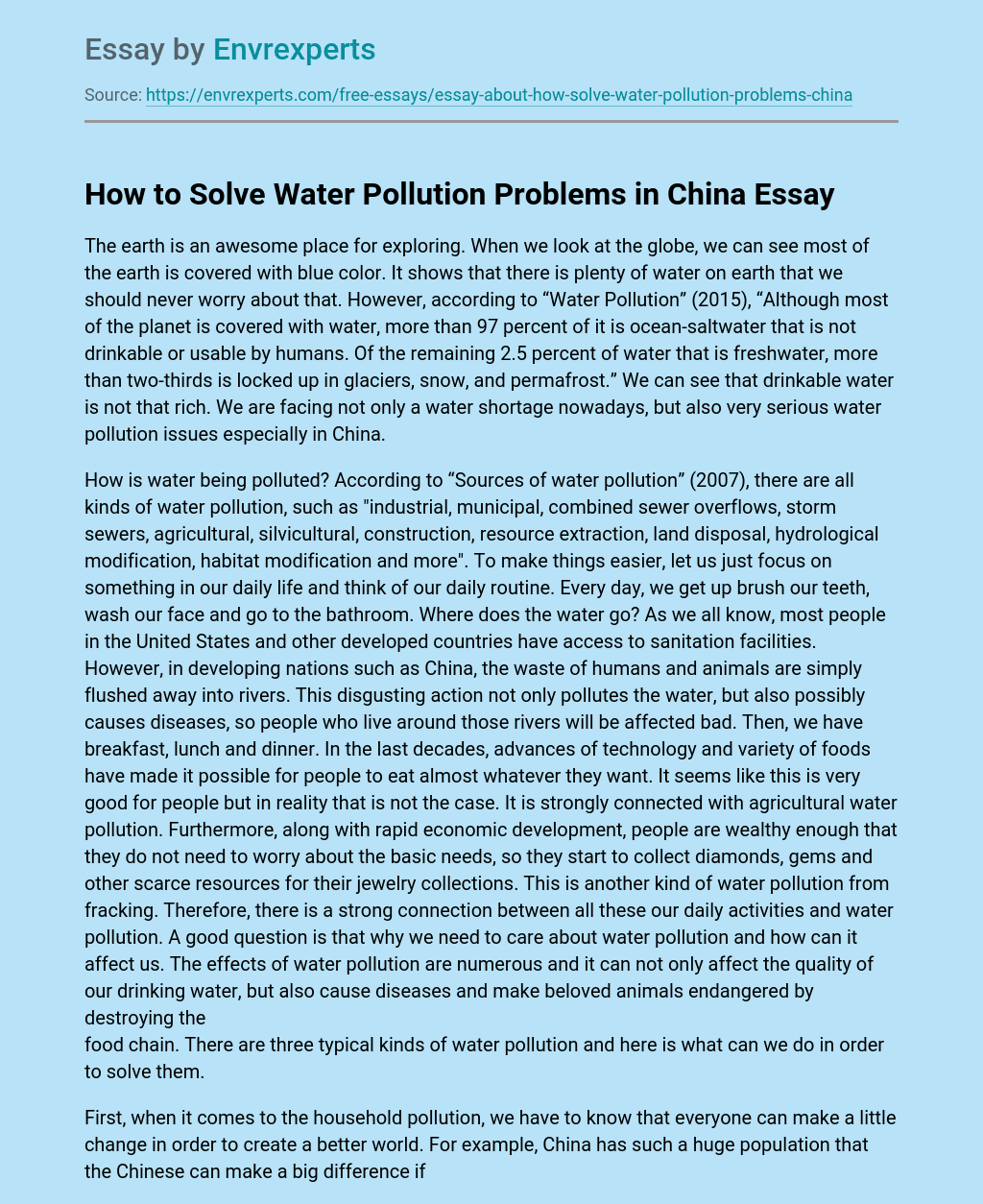