Human Impact on the Permanent Destruction of Earth

Recently, I have stumbled onto information about our environment. It includes studies, statistics locally and globally, and examples of thing I even catch myself doing everyday. The information I found regarding our environmental situation surprises me in ways worse than anyone can imagine. Humanity has no idea how our impact ruins our Earth permanently. The worst of them include the harm that plastic bags can cause, the truth about oxygen-deprived zones, our lack of useable water, and where our discarded phones and other electronic products end up.

Don’t waste time
Get a verified writer to help you with Human Impact on the Permanent Destruction of Earth
Hire writer
$35.80 for a 2-page paper

With so much information, it's hard to know where to begin. The things that astonish me the most are the things that I do daily, without even realizing the repercussions.

In the encapsulated environmental statistics, it shows that billions of plastic bags are made each year, but only one percent of those get recycled (Leech 2009). Just like most of humanity, my household throws away our plastic bags. Little did I know, around one billion birds, sea creatures, and mammals die each year by ingestion of our wasted plastic (Leech 2009).

Similarly, photos of multiple sea turtles are seen being misshapen due to plastic rings from packages of bottles. Humans must wake up in reference to the animals that we share this Earth with. Although there must be an importanceon focusing on the animals that we share the earth with, we must also remember to keep our natural resources alive and well. The Earth always provides us with everything we need to survive, but it will not always continue if we deplete the

An even more horrifying fact that I am noticing shows that the "oxygen-starved” zones in the world could cover the state of Oregon (Steph 2008). An oxygen-starved zone describes a dead piece of land caused by excess nitrogen from farm fertilizers, factory and vehicle emissions, sewage and other runoff (Steph 2008). The phrase "Our way of life is the problem, and thus also our only solution," (Tracer 39) must be applied in these types of situations. Because of humans, these zones are officially considered uninhabitable and cannot be grown upon. Also, many species other than humans cannot even survive at oxygen levels higher than we have now. This truly shows how this situation will grow to be greater than we previously thought. In addition to the immense oxygen problem, we realize that no species can live without water. However, I found multiple statistics on the lack of useable water on our Earth.

The most astonishing fact to me shows that less than one percent of the world's freshwater can be used by us humans due to contamination. I had no idea that 87 percent of freshwater gets put into use for agriculture, and about 60 percent of that water becomes wasted due to inefficient watering systems (Steph 2008). Whether they are agricultural workers or not, humans should realize that by wasting this water and not putting enough time into their filtering systems they are only hurting themselves in the long run. We are expected to be fighting over water soon based on the rising population and global warming. Asia has been considered an abundant place of water, and they have declined by 60 percent from 1955 to 1990 (Steph 2008). The average American wastes about 550 liters of water a day, as if it will always be plentiful. Per household, Americans waste about 300 gallons per day, without taking lawn irrigation into consideration (Steph 2008). However, even the best water filtration systems are not prepared to filter out toxic waste from electronics, and that may be the fastest-rising problem for our clean water crisis.

I found a case study done by Brett H. Robinson about how the wasting of electronic products gets into our food, water, and even our air. Because effective reprocessing creates an expensive hassle for these companies, environmental impact becomes a problem. Robinson even writes "Although illegal under the Basel Convention, rich countries export an unknown quantity of E-waste to poor countries, where recycling techniques include burning and dissolution in strong acids with few measures to protect human health and the environment,” (Robinson 2009).

They think the contamination will be localized; however, it has been migrating into water, which carries over to other countries. The workers who dump this E-waste have even been suffering from burns on skin contact, sickness through inhalation, smoke, and dust. The problem they leave with the rest of the world becomes far greater, though. This includes contaminations in soil, water, and even foods that get exported across the world (Robinson 2009). Although we humans don't think twice about throwing away a plastic bottle, discarding of our old iPhones, or leaving the sink running while we brush our teeth, the implications are rising fast. If these examples are what I am finding after only 20 minutes of looking, I can not imagine what else I could find about our decline in resources. The Earth creates life for us, and the only home the humans have would be this one. We as humans take all of these things for granted and we form a sense of entitlement. Unfortunately, this entitlement might only be realized as false when we are out of the resources that give us the means to stay alive, and when we have killed off the species that we need to coexist with. As Tracer puts it “If ‘reduce' in the three Rs means reducing our consumption and not only our waste, perhaps frugality would be the best way to identify this virtue” (Tracer 98). This must be the first step in ensuring that these atrocities to nature never happen again.

Human Impact on the Permanent Destruction of Earth. (2021, Oct 31). Retrieved from http://envrexperts.com/free-essays/essay-about-human-impact-permanent-destruction-earth 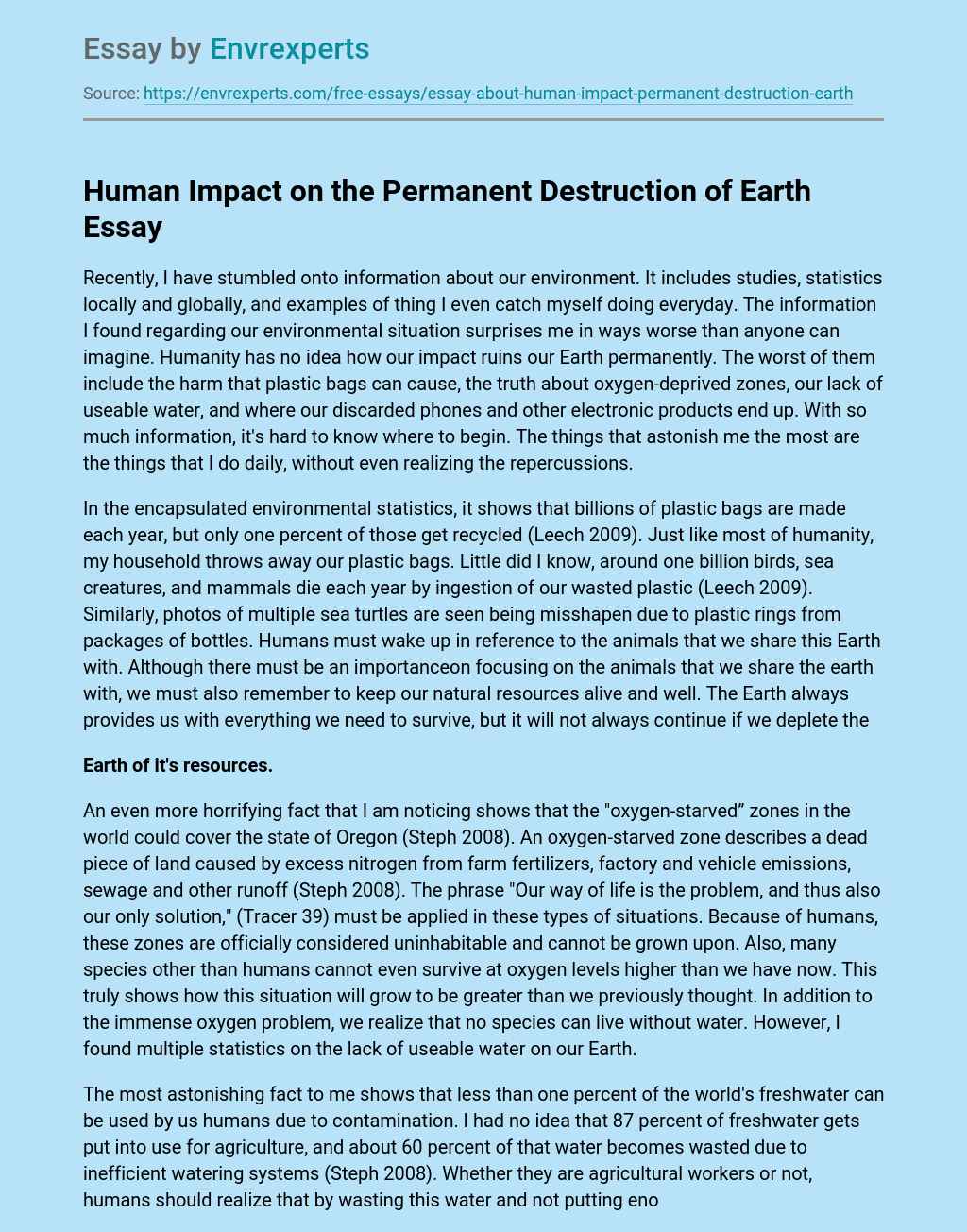