According to the United Nation,human trafficking(2016) “is the recruitment, transportation, transfer, harboring or receipt of persons, by means of the threat or use of force or other forms of coercion, of abduction, of fraud, of deception, of the abuse of power or of a position of vulnerability or of the giving or receiving of payments or benefits to achieve the consent of a person having control over another person, for the purpose of exploitation.”Organizations such as CARICOM and the organization of American States and the Association of Caribbean states have expressed their disapproval at the rapid increase of human trafficking cases in the Caribbean.

Don’t waste time
Get a verified writer to help you with Human Trafficking in Caribbean and Latin American
Hire writer
$35.80 for a 2-page paper

This growing practice impacts many nations across the world including the Caribbean, which have recently been drawn into what is called global panic.The United States Department of State, commonly referred to as the State Department, is a federal executive department responsible for carrying out U.S. foreign policy and international relations. The department places each country in four tiers.

Tier 1 is the highest ranking; it does not mean that a country has no human trafficking problem or that it is doing enough to address the problem.

A Tier 1 ranking instead means that a government has made efforts to address the problem that meet the TVPA minimum standards. Tier2 countries whose government do not fully meet TVPA’s minimum standards but are actively making efforts to bring themselves into compliance with those required standards. Tiers 3 are countries whose governments do not fully meet the TVPA’s minimum standards and are not making significant efforts to do so.The Global Initiatives to Fight Human Trafficking (2016)estimated that 2.5 million people are victims offorced labour, including sexual exploitation at any given time as a result of trafficking. According toUnited Nations Office on Drugs and Crime (UNODC) report(2010), the most common form of human trafficking (79%) is sexual exploitation. The victims of sexual exploitation are predominantly women and girls. Astonishingly, in 30% of the countries which provided information on the gender of traffickers, women make up the largest proportion of traffickers. In some parts of the world, women trafficking women is the norm. The second most common form of human trafficking is forced labour which makes up (18%), however this form maybe misrepresented because forced labour is less frequently detected and reported than trafficking for sexual exploitation. Worldwide, almost 20% of all trafficked victims are children. Two hundred and fifty thousand or about 10%, of reported victims, are in Latin America and theCaribbean. Majority of suspects who are involved in human traffickingare nationals within countries where the trafficking process occurs.Human trafficking is a rapidly growing problem in Latin America and the Caribbean, a region that contains a major source of, transit, and destination countries for trafficking victims. Major forms of Trafficking in Persons (TIP) in the Caribbean region and Latin America include labour trafficking, commercial exploitation of women and children with national borders and among countries in regions mainly in Latin America, as well as the trafficking of illegal immigrants in Mexico and Central America. According to the U.N. office on Drugs and Crime(UNODC)(2018), victims trafficked for force labour is 44% higher in Latin American than in Europe and central Asia. Two countries in Latin America and the Caribbean with the largest percentages of their populations subjected to “modern slavery”, this term is associated with human trafficking, are Haiti and Dominican Republic, according to walk free foundation.
Dominican Republic is the third largest international crime enterprise in the Caribbean, it generates over 9.5 billion U.S dollars every year in human trafficking revenue. Large population of undocumented immigrant Haitians are vulnerable to human trafficking. Women and children have been subjected to forced sex in this said country and throughout the world. Women from other countries, are also brought to the Dominican Republic for prostitution, an unknown number have become victims of human trafficking, even if they came voluntarily in the beginning. Dominican Republic is classified as a tier two country, another example is the government of Antigua and Barbuda, who do not fully meet minimum standards for the elimination of human trafficking but is making significant efforts to do so. Therefore, Caribbean countries like such Antigua and Barbuda as well as Jamaican fall into the Tier 2 ranking. These efforts included amending the trafficking law so that penalties are tied to penalties of more serious crimes, passing a national action plan for 2019 to 2021, drafting formal standard operating procedures on victim referral specific to each agency, increasing training on indicators of trafficking, and communicating with another government on trafficking investigations. However, the government did not meet the minimum standards of key areas.The government did not initiate any prosecution and identified fewer victims. According to research conducted byDunn and Ricketts(2016) on the scope of human trafficking in Jamaica have shown consistency with the global trend, and most activities were found to be sexual exploitation with females and children as the main victims. The research by these two individuals were carried out in Negril in Westmoreland, Montego Bay in St James and Kingston and St. Andrew. They also argued that exposure to global and other western lifestyles have raised economic exploitations and changes in Jamaican values, which allowed for more accommodation of activities related to human trafficking.
Both individual variables and outside conditions add to the continuous development of human trafficking-related problems within the Caribbean. A few Individual risk factors that might be the root cause of environment that facilitate human trafficking include poverty, unemployment, membership in an indigenous group, illiteracy, a history of physical or sexual abuse, homelessness, drug use, and gang membership. The State Department (2019)also has highlighted how vulnerably individuals who are, lesbian, gay, bisexual, and transgender to human trafficking. Different \"PUSH\" and \"PULL\" factors directly influence and perpetuate human sex dealing structures. These variables play an influence, as potential victim-survivors of trafficking are both \"pushed\" and \"pulled\" into being trafficked because they come from a background of extreme poverty and seeking some form of escape through work opportunities elsewhere .Various factors that result in human trafficking in the Caribbean include the high global demand for various forms of labour such as:

State department officials have stated that thousands of Caribbean and Latin American women are trafficked internationally each year, with a large number of victims coming from Dominican Republic and Columbia. According to a report done in 2016 by the United Nations children’s fund, “a combination of gangs, crime families and drug trafficking organizations, run sex trafficking rings in countries in Guatemala, that involved more than 48,500 victims”. Argentina and Brazil are destination countries for women trafficked from Caribbean countries such as the Dominican Republic and Haiti. Another type of victim are those individuals who are used for forced labour as more victims have been identified in South America and some parts of the Caribbean than in Latin America. Forced labour is used in the mahogany, brick making and gold mining industries in regions of Ecuador and Peru. Illegal gold mining operations Columbia and Venezuela are hot spots for human trafficking as most of these victims trafficked to these regions are from Haiti and the Dominican Republic. As long as human trafficking remains profitable, difficult to detect and hard to prosecute, traffickers will develop ways to recruits their victims. Traffickers use enticing offers such as new employment and travel opportunities to lure vulnerable people into the hands of those who will exploit them. Traffickers use enticing offers such as fronts to mislead people into believing it.

Traffickers tend to post opportunities in legitimate newspapers using a registered business as fronts. Countries that are experiences an economic downturn, instability and civil strife are targeted because citizens there are looking for ways to leave and make a life somewhere else. These jobs are usually in hospitality and the tourisms industry, the traffickers would pay for the flights of the victims into the country. On arrival, there documents would be seized and a process of breaking in happens. Breaking in involves a series of emotional, physical, and psychological abuses, human trafficking victims experience, such as rape, torture, threats, degradation, and the forced consumption of drugs and alcohol. This happens mercilessly during the acquirement period to break the spirit of trafficked victims. Survivors have also said that shortly after arrival they witnessed the murder of other victims. This causes victims to go into a self-preserving state of compliance. An example of this can be seen in Guyana, ads are listed in news papers stating that jobs opportunities are in Barbados, such as working in bakeries, nightclubs and salesclerks. Upon arriving in Barbados there documents are confiscated and a thrown into forced labour and commercial sex workthese victims are trapped in this predicament, as they are forced to repay their dept for their housing and travel expenses. Another way in which human trafficking victim is recruited into human trafficking is through sale by family. In some parts of the Caribbean, with area with unimaginable levels of poverty, desperation,debt and displacement cause some families to sell their children to traffickers. It the pressure to alleviate these hardships and bring some money to the family that causes the family to sell their children into modern day slavery to try and escape the hardship.
The United Nations tend to put a lot responsibility in dealing with human trafficking on the individual nations and focus on the efforts of criminalizing trafficking, national monitoring, tribunals and implementing ineffective sanctions which do not get to the root of the issue. In moving forward in how to better solve the issue, it is necessary to have a full a comprehension approach to this issue that involves challenging power imbalances, social norms, economic disparities among others.Arguably, it is also important to have financial support for smaller nations to be able to implement these changes. Other Caribbean and Latin American countriescan follow the exampleofBahamas, who government fully meets the minimum standards for the elimination of trafficking. The Bahamian government continued to demonstrate serious as well and sustained efforts through strong collaboration across multiple government agencies, which facilitated the trafficking as a result Bahamas is a Tier 1 country. The government of Bahamas initiates new labour and sex trafficking investigations, 37 potential trafficking victims were screened, five of which was identified, and a 1 new prosecution process started. It is recommended for not only Bahamas but other countries in the Caribbean to increase efforts to prosecute, convict and to punish traffickers, as well as continuing to implement victim identification and referral protocols to identify different victims of human trafficking especially among vulnerable groups of people, who are more at risked to be trafficked. Also continue to provide all identified victims with adequate protection and assistance. Continue to implement nationwide public awareness campaign to educate public officials about human trafficking. The government of Bahamas also increased its prevention efforts, taking steps to inform the public and potential victims about trafficking. The government anti-trafficking task met regularly, which was charged with ensuring the operational coordination of different trafficking cases. Other Caribbean countries need to look as Bahamas as a guide in improving their fight against human trafficking in their country.
Human trafficking is described as modern-day slavery and is a extremely lucrative form of transnational crime in the Caribbean because form of exploitation includes the recruitment and transportation of people forcefully for sexual exploitation or forced labour. Human trafficking generates $150 billion annually worldwide; and that’s a conservative estimate. As a result of these violations of human rights, various methods were put to in place to help decrease and eventually stop human trafficking. 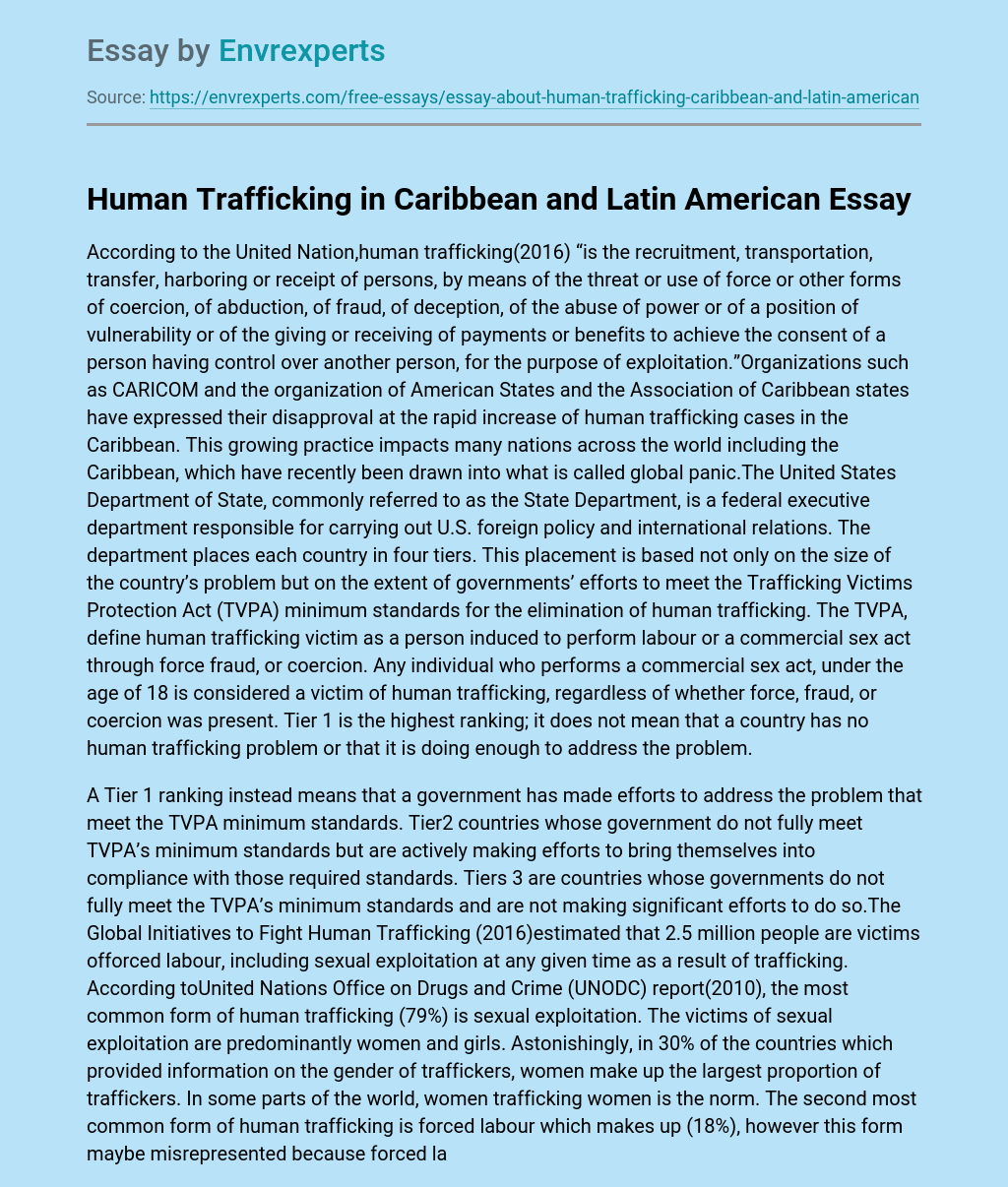