Impact of Arsenic on Human Body

Once arsenic compounds are absorbed, the liver’s metabolic pathway processes and converts them into different types of inorganic and organic species (Chung et al, 2014). These are then quickly absorbed into the blood and circulated to the human gastrointestinal tract. Organic arsenic is less absorbed based on the poor absorptive quality of the species whilst inorganic arsenic species are highly reactive and cause a series of intracellular reactions. The metabolites of arsenic are eventually by the major excretion pathway for the elimination of arsenic species from the body – urine.

Don’t waste time
Get a verified writer to help you with Impact of Arsenic on Human Body
Hire writer
$35.80 for a 2-page paper

The effects of arsenic exposure are divided into four stages Abdul et al (2015). They are preclinical, clinical, internal complications and malignancy stages. An outline of these stages can be found in the figure below:
Fig. 2. Stages of clinical manifestations in arsenic toxicity.
Arsenic in the body can affect all major organ systems.

Abdul et al (2015) highlights that the type of arsenic exposure dictates the development of clinical symptoms.

In acute arsenic toxicity organ damage could occur and may lead to early death whilst chronic exposure may lead to the development of malignant tumors and subsequently death. Arsenic has been classified as a group-1 carcinogen by the International Agency for Research on Cancer (IARC) as it has shown the ability to induce tumorigenesis in humans in skin, lung, bladder, liver, and prostates in exposed organisms. The diagram below shows the major organ systems that are affected by arsenic.

Fig. 2 Measured concentrations of As (mg/kg, dry wt basis) in leafy greens grown on the urban (Albany) and orchard (G6) soils amended with phosphate, Fe oxide, peat and gypsum
Zandsalimi et al (2011) carried out a similar test and concluded that the plant species tested had an arsenic content which positively correlated to that of the soil.

Methods of Management under federal law

Due to the adverse effects of arsenic on health and the environment, measures have been investigated and are even place to reduce the impact of pollution.
Kord Mostafapour et al. (2010) investigated the use of dissolved air flotation to remove arsenic from water. That study concluded that the method is highly efficient if poly aluminum chloride is used as a coagulant. Ahoulé et al. (2015) reviewed articles related the removal or arsenic from waters in Africa. One article (Ebina et al. 2003) examined the synthesis and arsenic adsorption capability of smectite-titanium oxide nanocomposite of tunable pore size. The results of the study show that a clay-titanium oxide nanocomposite synthesized from smectite powder and titanium oxide powder has a good adsorption capability of arsenic (III) and As (V) dissolved in water. The second article (Bowell, 1994) deals with the sorption of arsenic by iron oxides and oxyhydroxides in soils. The results showed that the iron oxides and oxyhydroxides coming from neutral-pH oxidized clay-rich soils and oxidized surface portion of mine tailing soils at the Ashantimine, Ghana, adsorb arsenic more than that coming from highly acidic soils or reducing conditions and the organic-rich soils. Though the technologies assessed have some advantages, there are some concerns as their by-products can be a further potential source for secondary arsenic pollution.
In 2017, Wang et al. published the results of a study of equipping coal fired power plants in the US and China with various air pollution control devices. The results of that was that on average, over 90% of arsenic in the flue gas wass captured by the dry particulate matter collection system with less than 3% of arsenic remaining in the boiler slag, and another 3% captured by the desulfurization system. 1% was captured by wet precipitators and the remainder was emitted from the stack. The study also showed that ultralow-emission technology with a low-temperature economizer before the electrostatic precipitator (ESP) promoted the capture of more arsenic compounds. Reactions between arsenic and the denitrification catalyst made it difficult to reach a perfect arsenic mass balance in a power plant, excluding plants that are equipped with a hot ESP installed before the selective catalytic reduction system.

Impact of Arsenic on Human Body. (2021, Oct 31). Retrieved from http://envrexperts.com/free-essays/essay-about-impact-arsenic-human-body 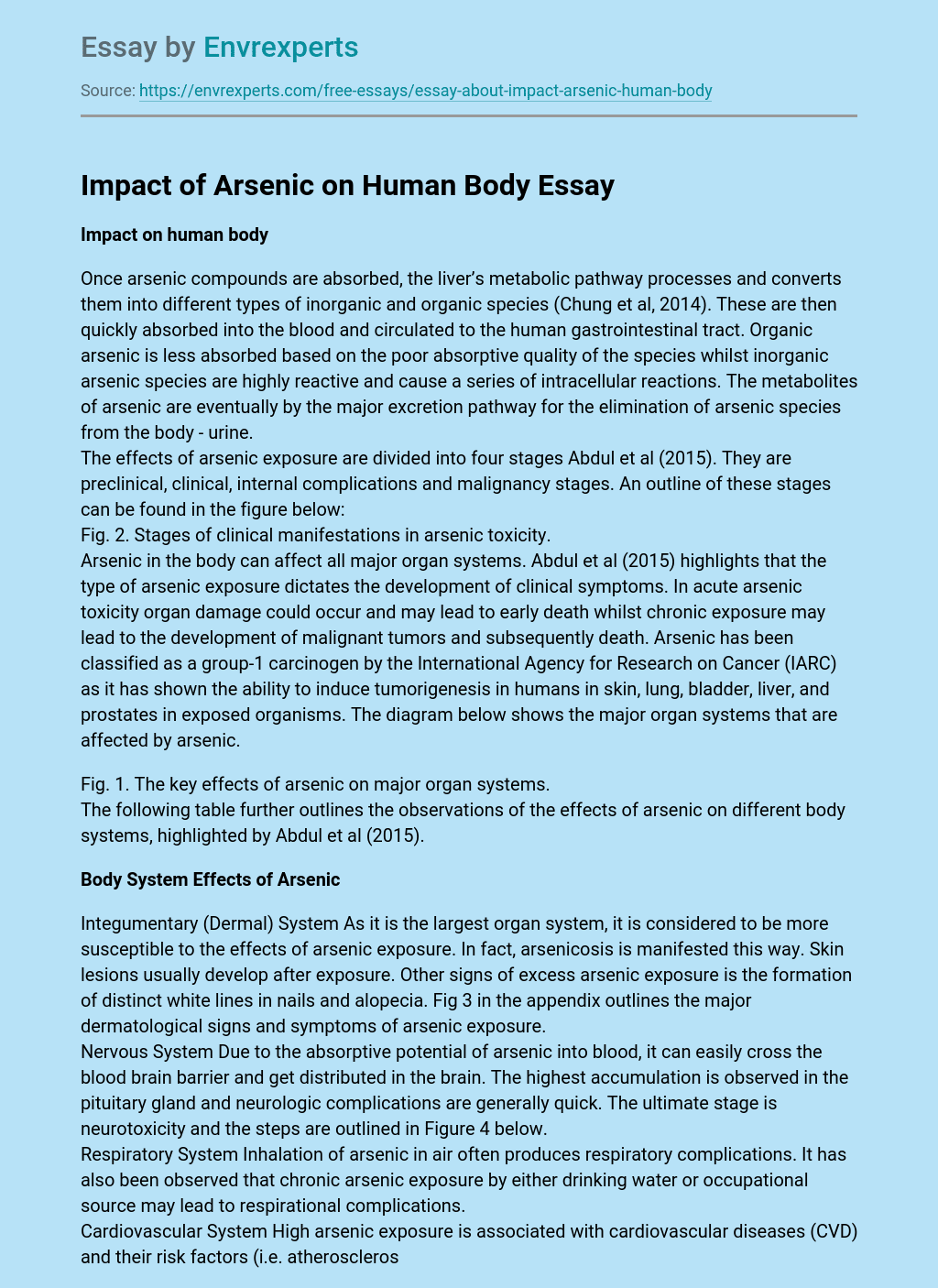