Impact of Climate Change on the Environment

Climate change has impact the environment over years by bringing dryness,Greenhouse Gasses, and pollution do to the human activities that raise carbon-dioxide to theatmosphere .Over the past 30 years the environment has suffered a lot of disasters such asfires, dryness, hurricanes, tornadoes Earthquakes and other different disasters do to thechanges in temperature. Some people care about the environment but there are also peoplethat do not really care about what is going around them. People has asked themselves Whatis climate change? while Climate change means a change in the statistical distribution ofweather patterns when that change lasts for an extended period of time.

Don’t waste time
Get a verified writer to help you with Impact of Climate Change on the Environment
Hire writer
$35.80 for a 2-page paper

We do not reallyknow how we can be helpful or what are we doing to make it worse. Climate change hasaffected the water, greenhouse gasses, the cause of pollution and also has broughtcontroversies between people.In the First place, Climate change has been debated to be part of the human activities.Will that be true or not? Well as Marcia Clemmitt stated in the article Climate Change inmentions that "the climate is changing, and the rate of change as projected exceeds anythingseen in nature in the past 10,000 years” (75).

This means that if the temperature keeps raisingand lowering it could be the beginning of more disasters to the environment. Also Climatechange is not only affected by the temperature but also by the greenhouse gas. As Hurrell said“Greenhouse gas concentrations in the atmosphere are now higher than at any time in the last750,000 years”(75).

This is just making the planet more sick and least likely to survive in thefuture.

Climate change will never end up do to impact in the earth. Even if the governmentwant to do something as Sen. James Inhofe said " THe united states senate is standing onfirmer ground than ever against mandatory reduction of carbon-dioxide, which couldeffectively throw our nation into an economic depression”(77). They are not doing anythingbecause the want to help out but because that's their job. Also they do not want to take therisk of bringing the economy down but if you do not do anything later on you will need more money and more resources. The debate between to Senator on whether the U.S should join aninternational treaty on climate change. Sen.James Jeffords stated that “Global warming willresult in more extreme weather, increased flooding and drought, disruption of agricultural andwater system, threats to human health and loss of sensitive species and ecosystems. We musttake action now to minimize these effects, for our children, our grandchildren, and futuregenerations” (89).

Unlike Sen.James Inhofe stated that “Much of the debate over globalwarming is predicated on fear rather than science………there is no fear of massive futureflooding as claimed in most global warming scenarios” (89). This debate just leads to morecontroversy and difference between each senators on whether they agree with Sen.Jeffords orSen. Inhofe.Additionally, water has become a crisis in the west do to the climate change. How hasclimate change affect the water and how is bringing controversies between people? Well as isstated in the article Water crisis in the West there are many countries that are in a droughtsituation. As John Wesley Powell stated “There is no sufficient water to supply the land”.Most of the people are against and some are in favor do to different circumstances. Forexample, people need water to plant and have crops, other people need water to feed theirfarm animals and finally other just need it to survive. Water is an element that we need inorder to survive.

Also, some of the people are fighting over water and making conflictsbetween each other as Powell stated in the article "you are pilling up a heritage of conflictand litigation over water". He stated that many people are making ideas about the waterissues but there is no support from the people do to the amount of water they want to usedand do not want to share with the other people. Climate change has really affect not only theenvironment but the people because all living things can not leave withoutwater.Although there has been some pro/cons between Thomas Birmingham(pro) andMichael L. Connor(con) do to the question Do federal water-management policies aimed at protecting fish species in the California Delta hurt farmers? Thomas Birmingham(pro) statedthat "We are living under a federal regulatory regime that has made droughts more frequentand their impacts more severe. And those same regulations are reducing many of the naturalbenefits we used to derive from periods of high precipitation." He is just trying to makepeople see the consequences but he is also looking at what the federal thinks about theprotection of fish species and how it will hurt farmers. Instead, Michael (con) stated that“…..water exports through the Delta have been modified to protect at-risk fish species and theoverall aquatic ecosystem, which affects water deliveries to urban and agricultural waterusers? He is making more and more people angry at the situation because they want tosurvive and also protect the different species of fishes.

Many people are against what RandyMcMillan stated “ If your water resource is declining, with more and senior water-rightholders injured, eventually you're going to be like other aquifers — [in] a race to the bottom,”This issue will just bring people against each other and will end up losing and tier. Climatechange has affected the water for bad, its just bringing up trouble and people are beginning tofight.Furthermore, how the people impact the climate change and how it affect us. Thereare different forms on how the people affect the world. The climate scientist Dana Nuccitellistated in the article that “We cause global warming by increasing the greenhouse effect, andour greenhouse gas emissions just keep accelerating,” The people need to be carefull witheach thing they used in order to keep greenhouse gasses lowering in order to stop theincreasing of climate change. Also, the climate change is affecting everyone in the oceans,glaciers, etc.. as it was stated in the article by Jennifer weeks that “ Certain types of weatherevents have become more frequent and intense, including heat waves, heavy downpours, and,in some regions, floods and droughts…… Sea level is rising, oceans are becoming moreacidic and glaciers and arctic sea ice are melting." scientist already started looking at the changes that the temperature is causing to the environment. Also they started to see that thehigher the climate change the dangerous it becomes for everyone.

One thing that manypeople has ask is should the united states adopt a carbon tax? William G.Gale(pro) stated that“A carbon tax could also reduce U.S. dependence on foreign sources of energy and createbetter market incentives for energy conservation, the use of renewable energy sources and theproduction of energy-efficient goods…” Unlike Kenneth P.Green(con) stated that “Taxingcarbon gets you virtually no climate or health benefit unless it exists within some binding,international carbon control regime, which is unlikely.” they have two different point of viewbut they want the best to lower the climate change. In addition, the general Ban Ki-moon saidthat the“Climate change is a “clear and present danger … to our development plans andobjectives and the health of economies large and small in all regions”. It's not only affectingthe big cities but also the small towns.Under those circumstance, climate change is increasing more and more over the yearsand it will affect us every second . As it was stated in the article by Boehlert“ Climate changewill have potentially significant effects on freshwater quality due to increases in river andlakes temperatures,changes in the magnitude and seasonality of rivers runoff and morefrequent and severe extreme events”(1326).

This is leading to the end of freshwater and howit will affect the U.S. without having freshwater. Also in the article Boehlert mentions that"these physical impacts on water will also have potentially substantial economics impacts,since water quality is valued for a number of recreational and commercial activitiesincluding river and lake visits, boating,swimming, and fishing, among other” (1326). It saysthat due to the visits and the use of water they need to be able to make some arranges and tryto contain a more sustainable freshwater. The world in which they live will not have enoughfreshwater for everyone. It will bring us to a dangerous situation in which everyone will fight just to get water, they need to be able to stop climate change and lowering it because if theydo not do it, then it will dry up everything.As shown above, Climate change is increasing faster and no one is able to stop it ifthey do not count on everyone. If the people do not stop causing greenhouse gasses goinginto the atmosphere. Everything will be changed. they will loose freshwater,homes if thereare fires and roughness, also they are not going to be able to gain nothing if they do not stopthe climate change. As Bloomberg said "Our climate is changing. And while the increase inextreme weather we have experienced in New York City and around the world may or maynot be the result of it, the risk that it might be — given this week's devastation — shouldcompel all elected leaders to take immediate action.”

Impact of Climate Change on the Environment. (2021, Oct 31). Retrieved from http://envrexperts.com/free-essays/essay-about-impact-climate-change-environment 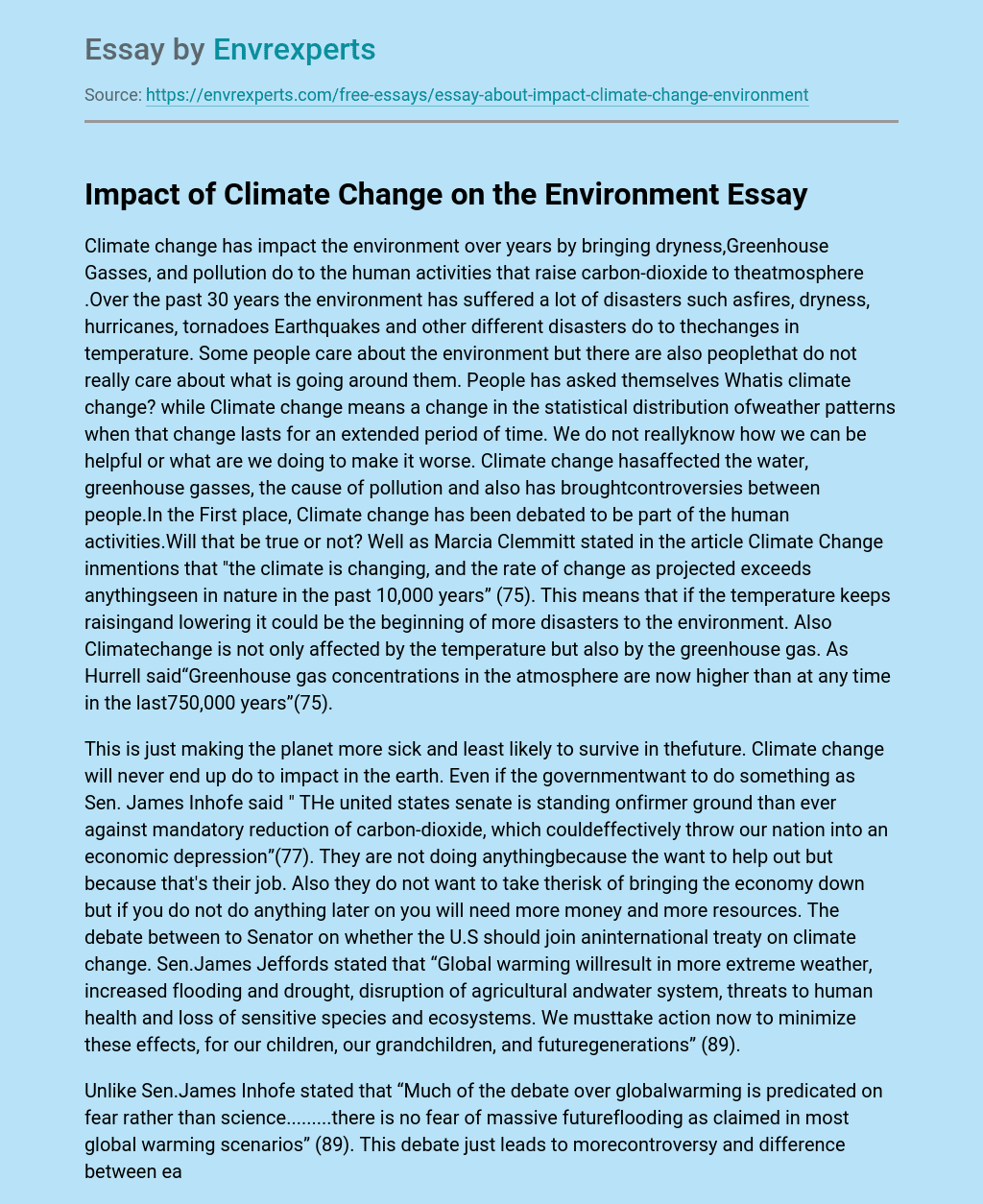