The Impact of Climate Change on Wildlife

In deserts around the world, animals are struggling as their habitats warm. Desert wildlife is vulnerable to climate change which is destroying their habitats and disrupting ecosystems. Scientists are addressing this issue by accelerating adaptation of natural resources; populations are trying to conserve water, many government agencies and NGOs are dedicated to wildlife protection. These efforts are reducing he effects of climate change on desert wildlife.

Many desert species are already pushed to their physiological limits.

Don’t waste time
Get a verified writer to help you with The Impact of Climate Change on Wildlife
Hire writer
$35.80 for a 2-page paper

“Life is always living on the edge in these places. Any shift could have really serious consequences, but we’re only starting to understand it now.” said plant scientist Andrew Young, the lead researcher on the dwarf succulent study (McDermott \"Climate Change May Be as Hard on Lizards as on Polar Bears\" 2016).

“If populations keep moving upward as temperatures rise, eventually there will be nowhere left to run” (McDermott \"Climate Change May Be as Hard on Lizards as on Polar Bears\" 2016).

See appendix A that shows a baby tortoise, it represents how those species are vulnerable to climate change. The xerocoles are already adapted to desert’s conditions. It is almost impossible for them to quickly adapt to other conditions with the temperatures increasing like Andrew Young said (McDermott \"Climate Change May Be as Hard on Lizards as on Polar Bears\" 2016). If climate change continues most of the deserts animals will die and it already had started.

The desert’s arid conditions cause soils to recover too slowly when they had been disrupted. This lack of water makes desert landscapes vulnerable. Climate change is melting icebergs that provide freshwater to desert communities. Increasing evaporation and dust storms are pushing deserts’ communities at their edges.

This disturbs desert’s ecosystems resulting in the disturbance of animals’ habitats. If the natural habitats of xerocoles are disturbed they will be affected; they are adapted to specific conditions. We monitored movement and activity patterns of 38 desert tortoises (Gopherus agassizii) at 2 locations in the southcentral Mojave Desert during 2 consecutive years differing markedly in winter rainfall.

During the first year, winter precipitation was 225% greater than the long-term average for this region, whereas a drought the following year resulted in precipitation that was 25% of the long-term average. These winter rains produced 2 distinct patterns of annual plant productivity: a bloom of annuals the first year, followed by their complete absence the second year.

As measured by radiotelemetry, home range size, the number of different burrows used, average distances traveled per day, and levels of surface versus burrow activity were significantly reduced in both populations during the drought year.

How Does Climate Change Influence on Deserts Wildlife?

With climate change the vegetation and large areas also change. As a result animals have difficulties to find food on which they rely on. Moreover some species may not be accustomed to the extreme temperatures increasing, they are sensible

The Impact of Climate Change on Wildlife. (2021, Oct 31). Retrieved from http://envrexperts.com/free-essays/essay-about-impact-climate-change-wildlife 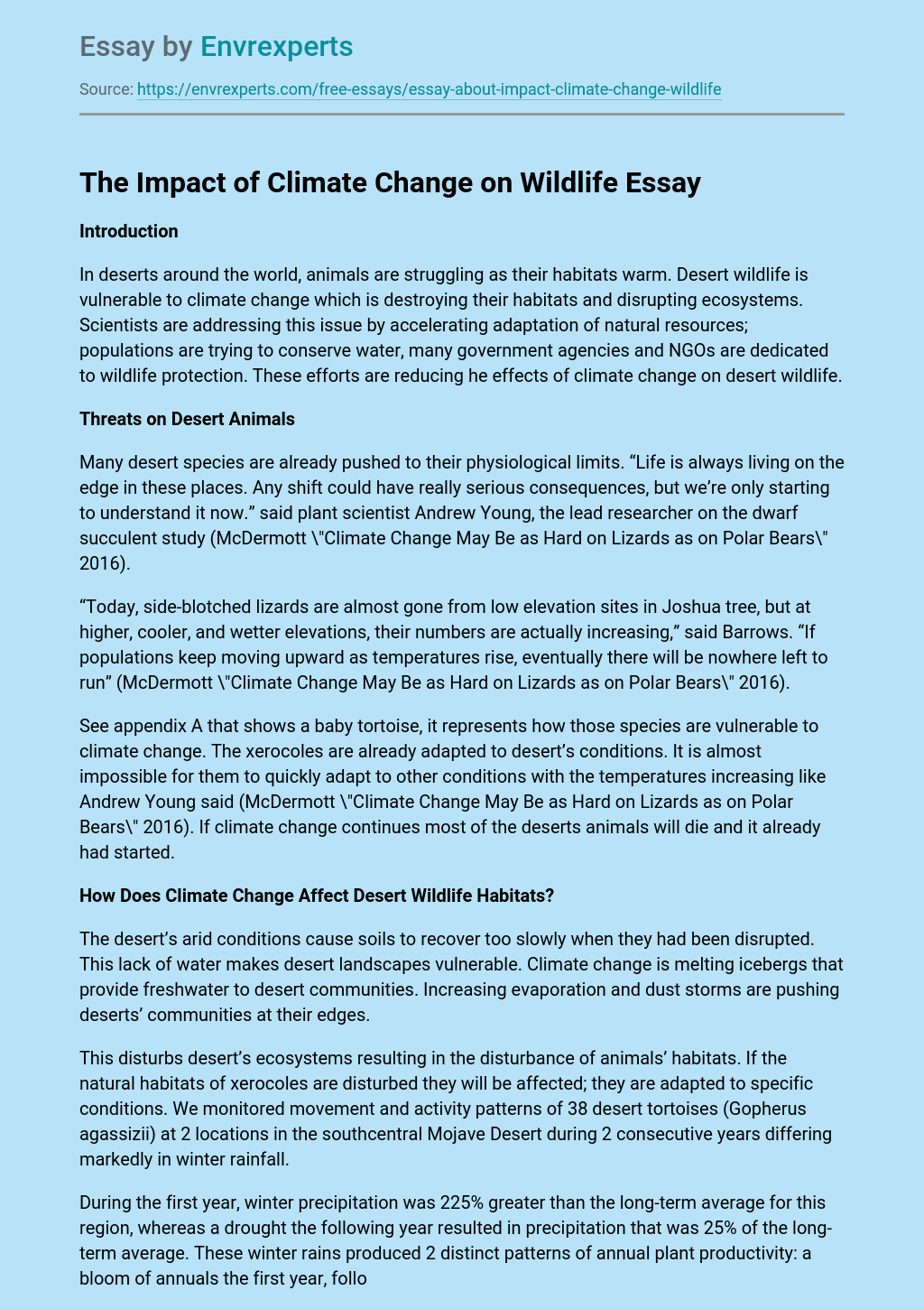