Impact of Energy Produce on Environment

Energy is required for an entire ecosystem to function. At present, burning of fossil fuels are our main source of energy. Examples of these fossil fuels are coal, petroleum, and natural gas. According to Edward Rubin, a professor of environmental engineering and public policy at Carnegie Mellon University in Pittsburgh, roughly 80 to 85 percent of the world’s energy being supplied are fossil fuels. Our continuous dependence on fossil fuels has led to a number of concerns and issues:

Don’t waste time
Get a verified writer to help you with Impact of Energy Produce on Environment
Hire writer
$35.80 for a 2-page paper

Carbon dioxide also cause ocean acidification where it affects the marine ecosystem and the coastal communities. According to the U.S. Department of Energy, approximately three-fourths of human-caused emissions came from the burning of fossil fuels.

Fossil fuels are regarded as non-renewable resources. Due to the high demand for these fuels, it is being sourced faster than it takes to replace it.

As a result, these resources are reduced every year and it would normally take up to millions of years for it to fully replenish.

Natural renewable resources are a viable option for fuel to produce energy. Biomass, which came from solid waste of animals and plants, is an example that can be used to produce biofuels. Biofuels are a carbon neutral and renewable resource that can provide a solution to the problems of the fossil fuels. At present, researchers are examining the possibility of an algae biomass to be an alternative source in producing biofuels.

Algae are organisms that grow in aquatic environments and requires mainly light, and carbon dioxide for its growth to create biomass. Algae biomass contains natural oils which are important in producing biofuels and other bioproducts.

Microalgae is a microscopic and unicellular type of algae which contains high lipids or natural oil content. These oils can be turned to biodiesel since majority of the natural oil of microalgae are made of triacylglycerol which is primarily used in the production of biofuels. Microalgae can also supply large quantities of biomass which can be used for electrical generation. Microalgae occupy smaller farming land area than other land crops which makes it easier for mass cultivation. Additionally, mass cultivation of microalgae is believed to be effective in decreasing carbon dioxide emission, therefore reducing the chance of global warming and climate change. Unlike fossil fuels, algae are an abundant and renewable resources. There are over 100,000 diverse species of algae present today. This makes it as an advantage for the researchers who can develop algae biofuels and bioproducts in the future.

Impact of Energy Produce on Environment. (2021, Oct 31). Retrieved from http://envrexperts.com/free-essays/essay-about-impact-energy-produce-environment 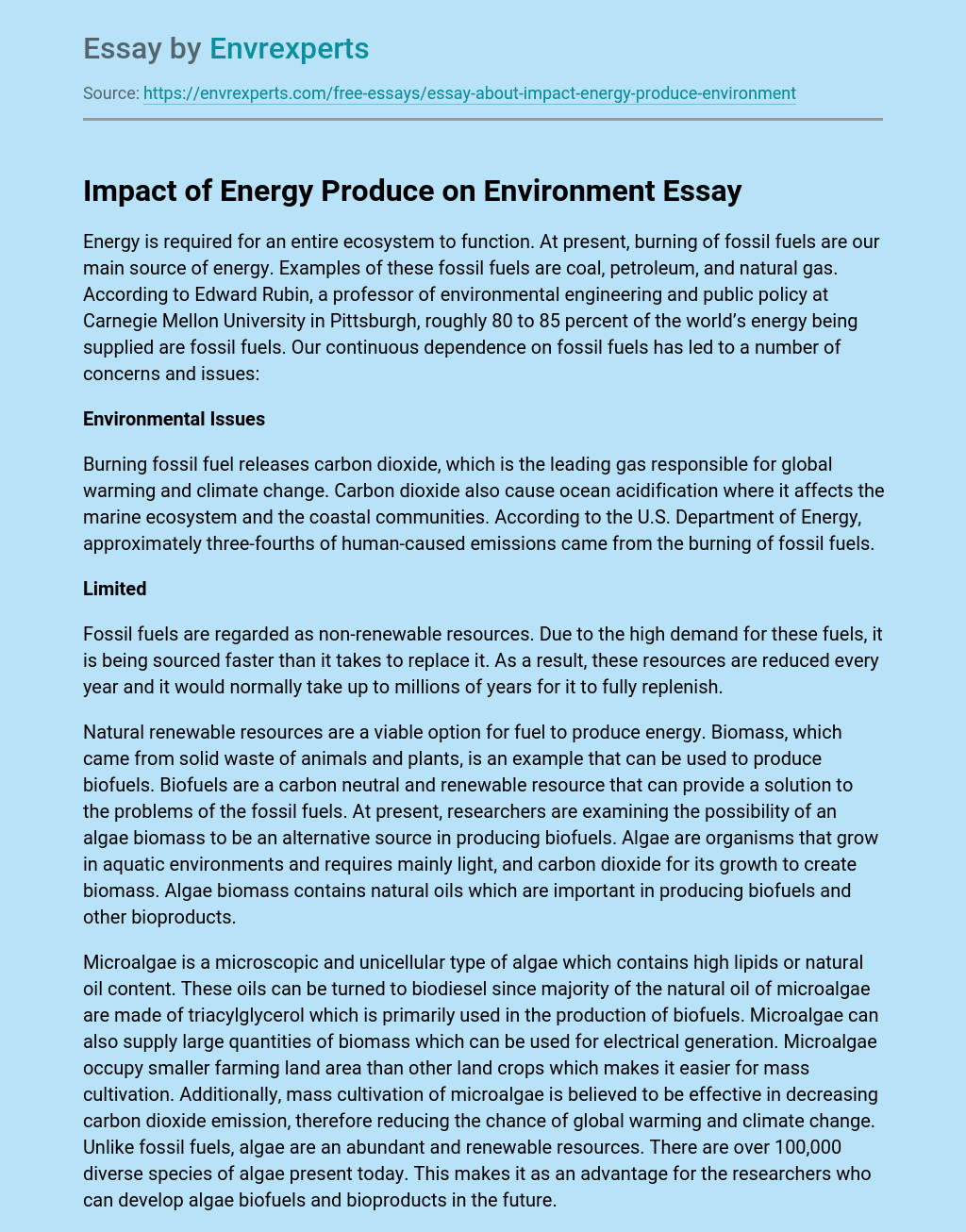