As the world’s appetite for meat increases, countries across the globe are bulldozing huge swaths of land to make more room for animals as well as crops to feed them. From tropical rain forests in Brazil to ancient pine forests in China, entire ecosystems are being destroyed to fuel humans’ addiction to meat. According to scientists at the Smithsonian Institution, seven football fields’ worth of land is bulldozed every minute to create more room for farmed animals and the crops that feed them.

Don’t waste time
Get a verified writer to help you with Impact of Environmental Protection on Air Pollution
Hire writer
$35.80 for a 2-page paper

Of all the agricultural land on earth 80 percent is used to raise animals for food and grow grain to feed them. In the “finishing” phase alone, in which pigs grow from 100 pounds to 240 pounds, each hog consumes more than 500 pounds of grain, corn, and soybeans; this means that across the World pigs eat billions of tons of feed every year. Chickens, pigs, cattle, and other animals raised for food are the primary consumers of water in the Across the world, a single pig consumes 21 gallons of drinking water per day, while a cow on a dairy farm drinks as much as 50 gallons daily.

Carbon dioxide, methane, and nitrous oxide together cause the vast majority of global warming. Producing a little more than 2 pounds of beef causes more greenhouse-gas emissions than driving a car for three hours and uses up more energy than leaving your house lights on for the same period of time.

According to the United Nations, a global shift toward a vegan diet is one of the steps necessary to combat the worst effects of climate change. Factory farms also produce massive amounts of dust and other contaminates that pollute the air. A study in Texas found that animal feedlots in that state produce more than 7,000 tons of particulate dust every year and that the dust “contains biologically active organisms such as bacteria, mold, and fungi from the feces and the feed.” And when the cesspools holding tons of urine and feces get full, factory farms may circumvent water pollution limits by spraying liquid manure into the air, creating mists that are carried away by the wind and inhaled by nearby residents. According to a report by the California State Senate, “Studies have shown that [animal waste] lagoons emit toxic airborne chemicals that can cause “inflammatory, immune, … and neurochemical problems in humans.”

The Environmental Protection Agency (EPA) reports that roughly 80 percent of ammonia emissions in the U.S. come from animal waste. A California study found that a single dairy cow “emits 19.3 pounds of volatile organic compounds per year, making dairies the largest source of the smog-making gas, surpassing trucks and passenger cars.”\nPolluting the Water Each day, factory farms produce billions of pounds of manure, which ends up in lakes, rivers, and drinking water. The one trillion pounds of waste produced by factory-farmed animals each year are usually used to fertilize crops, and they subsequently end up running off into waterways ,along with the drugs and bacteria that they contain. Many tons of waste end up in giant pits in the ground or on crops, polluting the air and groundwater.

According to the EPA, agricultural runoff is the number one source of pollution in our waterways. It doesn’t stop there. Streams and rivers carry excrement from factory farms to the Mississippi River, which then deposits the waste in the Gulf of Mexico. The nitrogen from animal feces and from fertilizer, which is primarily used to grow crops for farmed animal, causes algae populations to skyrocket, leaving little oxygen for other life forms. A 2006 report by the National Oceanic and Atmospheric Administration found that the Gulf of Mexico’s “dead zone” an area in which virtually all the sea animals and plants have died, is now half the size of Maryland. In 2006, a separate study by Princeton University found that a shift away from meat production as well as The adoption of plant based diets would dramatically reduce the amount of nitrogen in the Gulf to levels that would make the dead zone “small or non-existent. 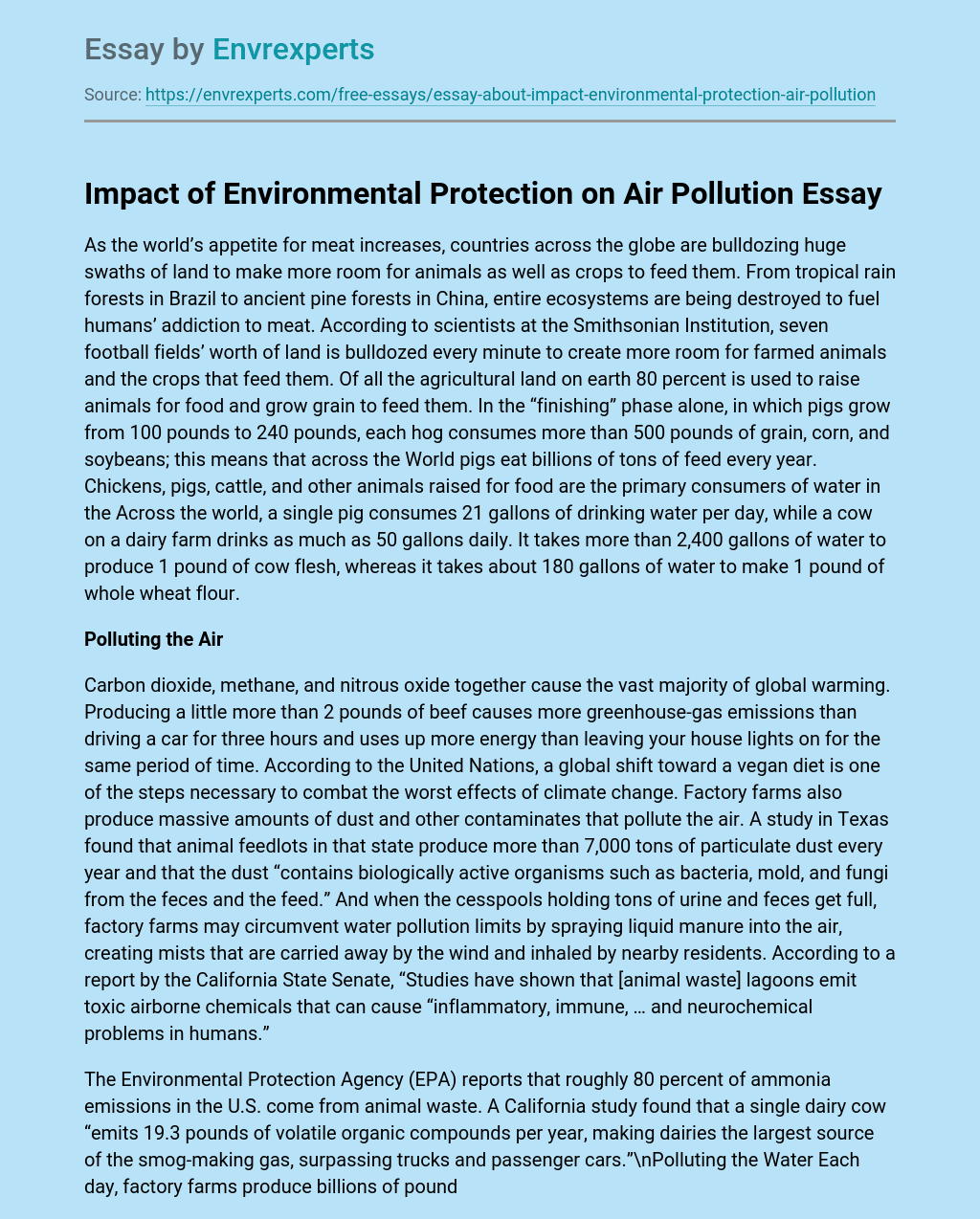