Impact of Global Warming in Earth

Don’t waste time
Get a verified writer to help you with Impact of Global Warming in Earth
Hire writer
$35.80 for a 2-page paper

In the 1820s, a mathematician Joseph Fourier said that energy that is going to the earth as sunlight has to have balanced energy returning to space. They thought this because heated surfaces emit radiation. He also said that some of the energy will be held inside the atmosphere and not return to space, and then keeping the earth warm and making a big problem. Global warming would never have been able to get this bad if there weren’t any greenhouse gases.

There are many people who have had a big impact on the research to prove global warming. But there are 2 that have been a big help in proving global warming is real. The first one’s name is Joseph Fourier. The second one’s name is John Tyndall. These two were a big help in discovering global warming. Joseph Fourier was born March 21, 1768, in Auxerre, France and later died May 16, 1830, in Paris. He was the son of a tailor and he attended the local school and was taught by Benedictine monks. The article said, “Joseph’s work stimulated research in mathematical physics, which has since been often identified with the solution of boundary-value problems, encompassing many natural occurrences such as sunspots, tides, and the weather”, (Struik, 2020). He was a french mathematician who had a strong influence on math because of his theory called The Analytical Theory of Heat and it was made in 1822. This theory helped Fourier discover the greenhouse effect. John Tyndall was born on August 2, 1820, in Leighlinbridge, County Carlow, Ireland and died December 4, 1893, in Hindhead, Surrey, England. He was born in a poor family and Tyndall spent his savings on getting a Ph.D. from the University of Marburg. He became a professor at the natural philosophy at the Royal Institution. The article’s narrator said, “He discovered that water vapor and carbon dioxide absorb much more radiant heat than the gases of the atmosphere and argued the consequent importance of those gases in moderating Earth’s climate—that is, in the natural greenhouse effect”, (Barton, 2019). There he went on to research gases and found out what gas made a big impact on the environment and ones that helped global warming become worse.

Global Warming has many connections to science but a big one would have to be its link to the weather. The higher temperature is making more heatwaves, more droughts, heavier rainfall, and also more powerful hurricanes. In 2016 there was a drought and the earth\'s water temperature is getting warmer. Burning fossil fuels causes sea levels to rise various meters which are destroying harbors and animal homes. The impact of global warming is felt across the globe and people are getting hurt because they are not used to the weather. Also what greenhouse is doing to the environment. Gases that trap heat in the atmosphere are called greenhouse gases and greenhouse gases are horrible for the environment. When they trap heat in the atmosphere it is affecting the environment by making the world too hot.

Carbon Dioxide, Methane, Nitrous Oxide, and Fluorinated Gases are all gases that are bad for the environment and also all are greenhouse gases. These gases are ruining the environment by making the environment too hot and then people and animals get hurt because they don’t usually live in hot weather. Also, another global warming connection to science is global warming’s link to extreme weather. Extreme rainfall, extreme droughts that kill animals, and habits being destroyed are some of the few things global warming is doing. Some other things global warming is doing is making farmer’s corps ruined because of too hot weather, not enough food and water for wild animals, and less snow and more summer. In an article, the narrator says, “In 2015, scientists said that an ongoing drought in California—the state’s worst water shortage in 1,200 years—had been intensified by 15 percent to 20 percent by global warming,”(McMillan, 2016). The weather is becoming messed up because of global warming.

Global warming is a problem that can be stopped and if we speak up about how bad it is more and more people will try to find a way to stop it. Another way to stop global warming is to power your home with renewable energy. Use solar panels as power instead of a normal generator because a normal generator has half of the power of solar panels. Use wind power if you live in an area very windy all year so you can get the most power out of it. If you use renewable energy we will be using fewer fossil fuels and with fewer fossil fuels we will not be harming the environment so much. If we use fewer fossil fuels the world will be cleaner and the earth will be alive for longer. Also, another way to fight global warming is to buy energy-efficient appliances. Use energy-efficient appliances, they are usually at the stores like lowes and home depot. If you get energy-efficient they will help you use less electricity and then that means you will not pay a lot of money on electric bills. You will be helping the environment by using less energy. To know if the product is energy efficient you should look for the energy star symbol. You will be saving money and helping the environment.

Also, another way to stop global warming is to drive energy-efficient cars. Buying a hybrid and an electric car is better than buying a normal gas car because there are more benefits to buying those types of cars than buying gas cars. The article says, “For good reason: Relative to a national fleet of vehicles that averaged only 28.3 miles per gallon in 2011, Americans will spend $80 billion less at the pump each year and cut their automotive emissions by half”, (MacMillan, 2016). Most hybrid cars are smart cars that are better than normal gas cars because hybrid cars have better features. You save money on gas and if you get an electric car you won’t spend anything on gas and it will be less to spend on electricity for the electric car.

Another way to stop global warming is to make a more energy-efficient house. Make the windows bigger so more light can come into your house so you can get a lot of sunlight. By doing this you will get lots of vitamin c. You can get solar panels and can save some much money to spend on other stuff and also will be more energy efficient. If you make your house more energy efficient it will help you and the environment.

Another way to stop global warming is to turn off your devices. Turning off your devices that plug into a wall when you\'re not using them will save you thousands of pounds of carbon dioxide a year. The article says, “Taken together, the outlets in your home are likely powering about 65 different devices—an average load for a home in the U.S. Audio and video devices, cordless vacuums and power tools, and other electronics use energy even when they\'re not charging”, (MacMillan, 2016). If you turn off your devices the environment would be a lot better and many people will live longer because they won’t die from carbon dioxide poisoning. We should unplug our devices so the world will be less polluted and will be cleaner. Another way to stop global warming is to adjust your thermostat. Moving your thermostat in winter down 2 degrees and in summer up 2 degrees will save 2,000 pounds of carbon dioxide every year. If you keep your thermostat too high it will use a lot of gas which will make global warming worse. If you keep your thermostat low then the a/c will use a lot of gas which will pollute the earth. In total if we keep our thermostat at a reasonable temperature then global warming will be heavily stopped. An issue that global warming is presenting is the temperature going up by 8 degrees.

In 2100 the temperature is going to go up to 8 degrees. If this keeps going on our temperature will be too different and if it is too different we will die. We would die because our bodies are not used to the temperature and we would die a horrible death. Global warming is a significant problem and we will die if we don’t try to stop it. Another issue that global warming is presenting is more frequent bad weather. The highest temperatures are making worse types of disasters. In the article, it says, “The warmer climate will create an atmosphere that collects, retains, and drops more water, changing weather patterns in such a big way will make wet areas become wetter and dry areas drier”, (Denchak, 2016).

Also in the article, it says, “In 2015 there were multiple kinds of weather and climate disaster events in the U.S. that included harsh storms, floods, drought, and wildfires and they were caused by global warming”, (Denchak, 2016). If we don’t stop global warming we will die from the bad weather. Another issue that global warming is presenting is higher death rates. The article says, “In the United States, hundreds of heat-related deaths occur each year due to direct impacts and the indirect effects of heat-exacerbated, life-threatening illnesses, such as heat exhaustion, heatstroke, and cardiovascular and kidney diseases”, (Denchak, 2016). The article says, “As temperatures spike, so does the incidence of illness, emergency room visits, and death”, (Denchak, 2016). For four days straight if the temperature doesn’t go down, it will lead to severe health outcomes. Where there are hotter days in a place where people aren\'t used to it they get health problems.

Impact of Global Warming in Earth. (2021, Oct 31). Retrieved from http://envrexperts.com/free-essays/essay-about-impact-global-warming-earth 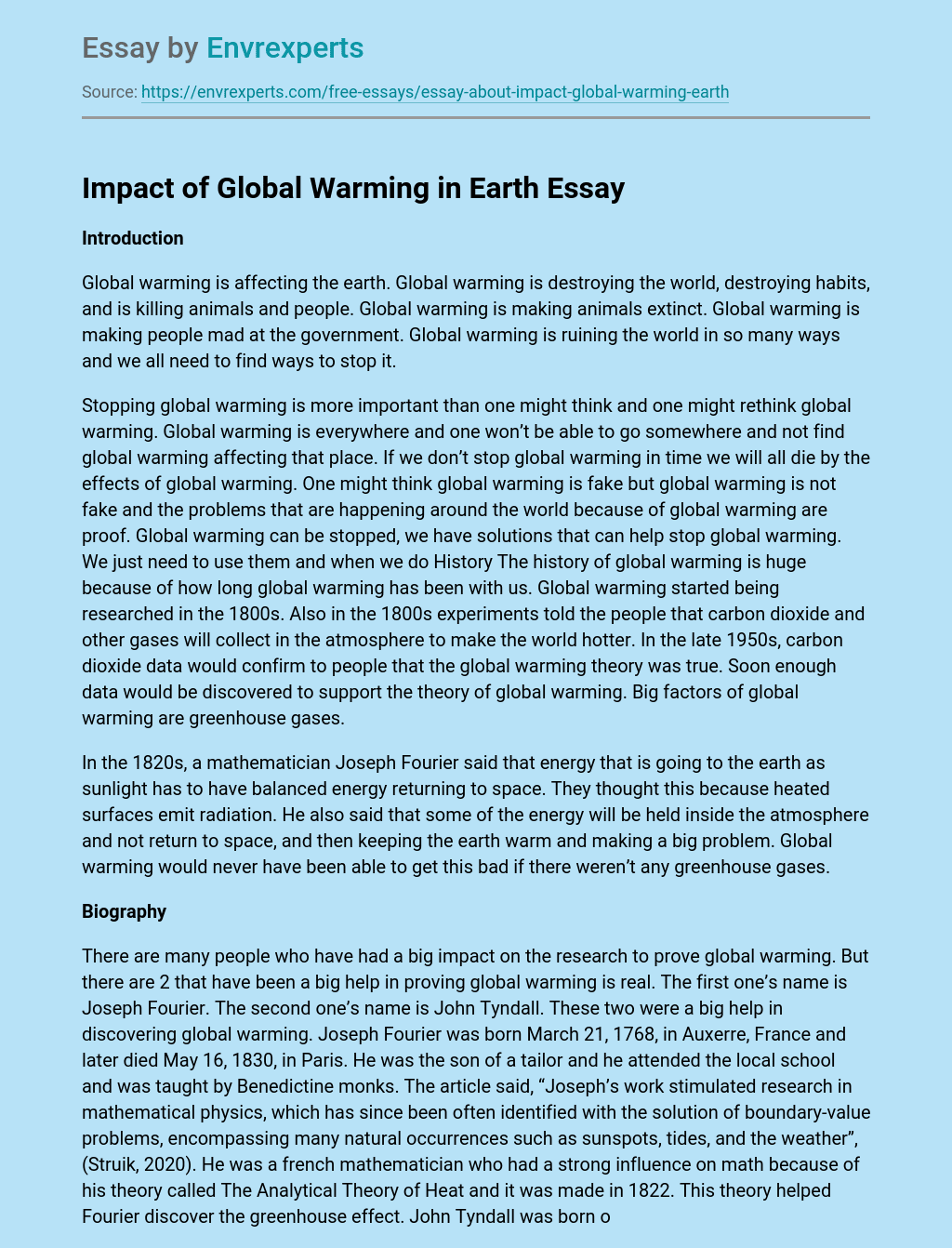