Global warming is a rise in global temperatures when greenhouse gases and other air pollutants are released in the atmosphere where they gather and absorb sunlight and solar radiation which should be released into space. This trapped heat causes the plant to get hotter which is known as the greenhouse effect. Global warming can cause many health, social and economical problems for countries which can hold the countries back from improving themselves and developing further. These effects can come in many forms especially affecting developing countries.

Don’t waste time
Get a verified writer to help you with Impact of Greenhouse Gases on Global Warming
Hire writer
$35.80 for a 2-page paper

Firstly, global warming could bring infectious diseases especially in tropical regions. In places like Africa, an increase in temperature also leads to an increase in mosquito populations, also increasing the risk of malaria and other infections brought by insects. Other regions are also affected. For example, the United Kingdom was had an outbreak of the legionnaires\' diseases which is a bacterial lung infection that is linked to global warming to global warming, and the United States were suffering from malaria outbreaks; in 2006.

WHO states that global warming will also cause a major increase in insect diseases in Europe. Countries like Azerbaijan, Tajikistan and Turkey might already be in the danger zone for malaria.

However, there is a difference with how different countries will deal with this problem because the ability to tolerate temperature changes differs from region to region. Richer societies can utilize technological advances; for example, the use of more powerful air conditioners and the construction of houses minimize heat retention. On the other hand, developing countries lack not only the technological knowledge, but also the resources and public health systems, required to prevent such outbreaks.

Secondly, prolonged periods of abnormally high temperatures can have serious health effects on vulnerable people in the populations, such as the elderly, children and the sick. This was already seen during the 2003 heatwave in Europe, which claimed approximately 35,000 lives. In a study by Hadley Center for Climate Prediction and Research in the United Kingdom, scientists using computer models showed how greenhouse gas emissions have increased the likelihood of heatwaves.

The most common health effect is hyperthermia or heatstroke that can be fatal if left untreated. IPCC predicts that global warming will lead to hot days, followed by nights of high temperatures. This could therefore hinder their development because affected countries like these might have to put their development projects on hold so that they can find a way to curb this problem. This could take them a long time as these problems could be affecting a lot of people so they will need to be able to cater all of them. The focus on these diseases, will drive their attention away from development projects. 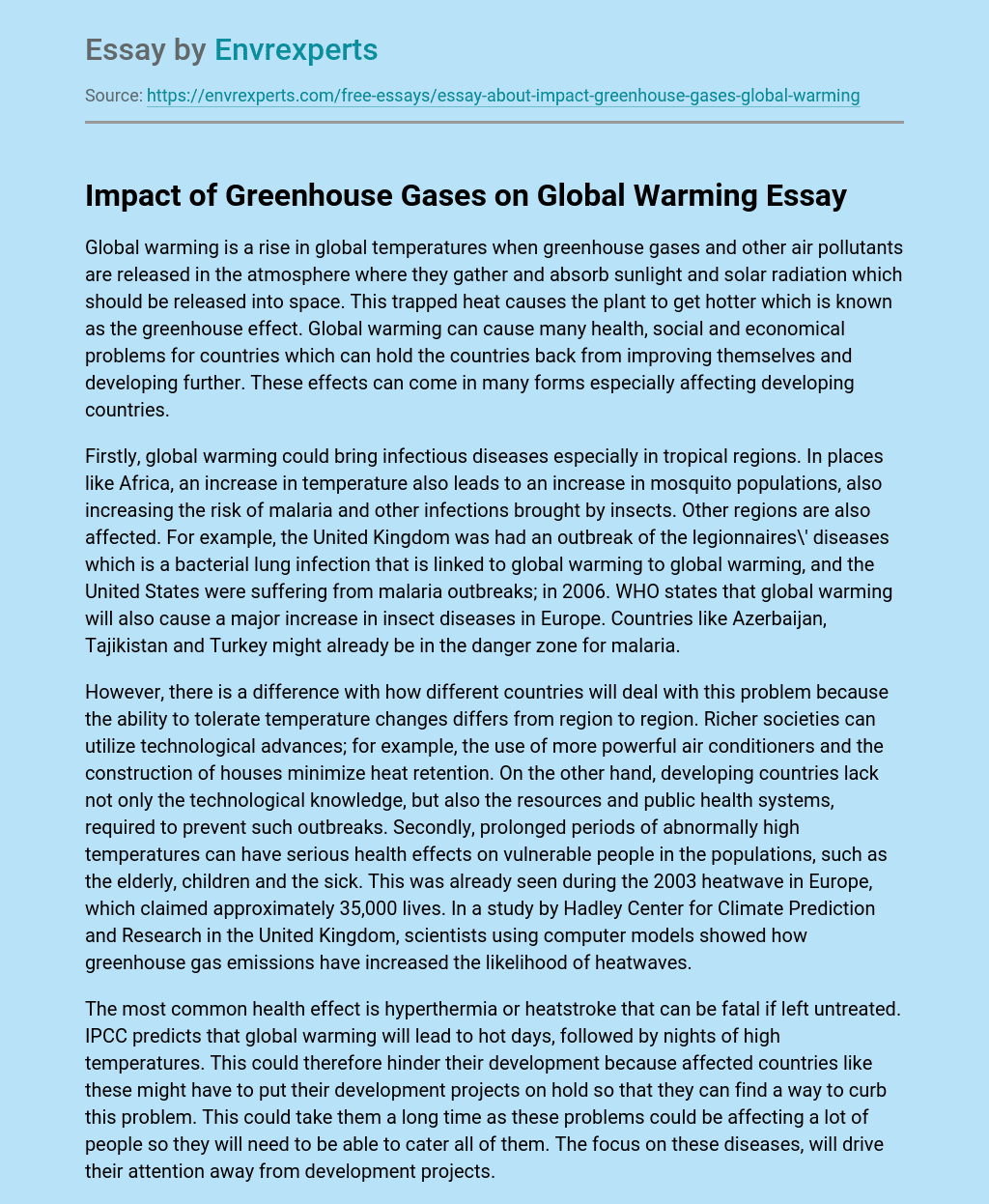