Impact of Human`s Biodiversity on Earth

Biodiversity is the variation of biotic organisms such as plants and animal life in the world or a habitat, a high level of which is generally considered to be important and desirable. The claim is suggesting that human’s impact on our environment through things such as population growth and use of land and our lifestyles are causing major negative changes to the earth’s biodiversity to the point that we have wiped out half the species since 1970. I found this suggestion to be quite staggering which is why I chose this research question.

Don’t waste time
Get a verified writer to help you with Impact of Human`s Biodiversity on Earth
Hire writer
$35.80 for a 2-page paper

I would very much like to know if humans have really had such a dramatic and negative impact on our environment over the last 50 years. This is an important question to ask ourselves because if we don’t recognise what we have done in the past many other species could become extinct in the near future .

Everything that we enjoy as a society is after all provided by nature, from our health and wellbeing to our wealth, security and sustenance.

What sort of future do we therefore have if we are wiping out the earths species at such an alarming rate?
WWF is one of the world’s biggest and most knowledgeable independent conservation institution. The WWF has more than 5 million supporters with a global network reaching more than 100 countries. Their Living Planet Report which is updated every two years outlines the condition of the planet. This includes biodiversity, ecosystems, and demand on our natural resources, and the extent to which it affects the life of both humans and animals.

and what it means for humans and animals. The report compiles together a wide diversification of research to supply a complete view of the well-being of the Earth. The 2018 Living Planet Report has recorded an overall decline of 60% in species population sizes between 1970 and 2014.
WWF used a dataset, which they refer to as the Living Planet Index ( LPI) , to track 16,704 populations of more than 4,000 species from 1970 to 2014. Figure 1 attached shows this index has a 60% (range: -50% to -67%) decline between 1970 and 2014. The white line indicates the index values whilst the green areas express the 95% confidence intervals surrounding the trend. WWF/ZSL (2018)

The report also outlines what are the biggest influencers of biodiversity decline which are habitat loss, and overexploitation (Figure 2 below). These 2 combined are responsible for a minimum of two-thirds of all risks to populations in each group (birds, mammals, fish, and amphibians and reptiles). Apart from these, invasive species and disease, pollution and climate change are further origins of causes.

Another recent report from the Intergovernmental Science-Policy Platform on Biodiversity and Ecosystem Services (IPBES) paints a dire picture of the declining species rates globally which they indicate is accelerating and will have extremely negative impacts worldwide. . The report is constructed on the methodical review of about 15,000 sources, both from government and scientific. The Report demosnstrates that approximately 1 million animal and plant species are currently on the verge of extinction , numerous within the next few decades, which is more than ever before . An important fact also raised in the report was that the extent to which the current rate of global species extinction is significantly higher now compared to average over the last 10 million years, which they stated was tens to hundreds of times larger with the rate accelerating.

Impact of Human`s Biodiversity on Earth. (2021, Oct 31). Retrieved from http://envrexperts.com/free-essays/essay-about-impact-humans-biodiversity-earth 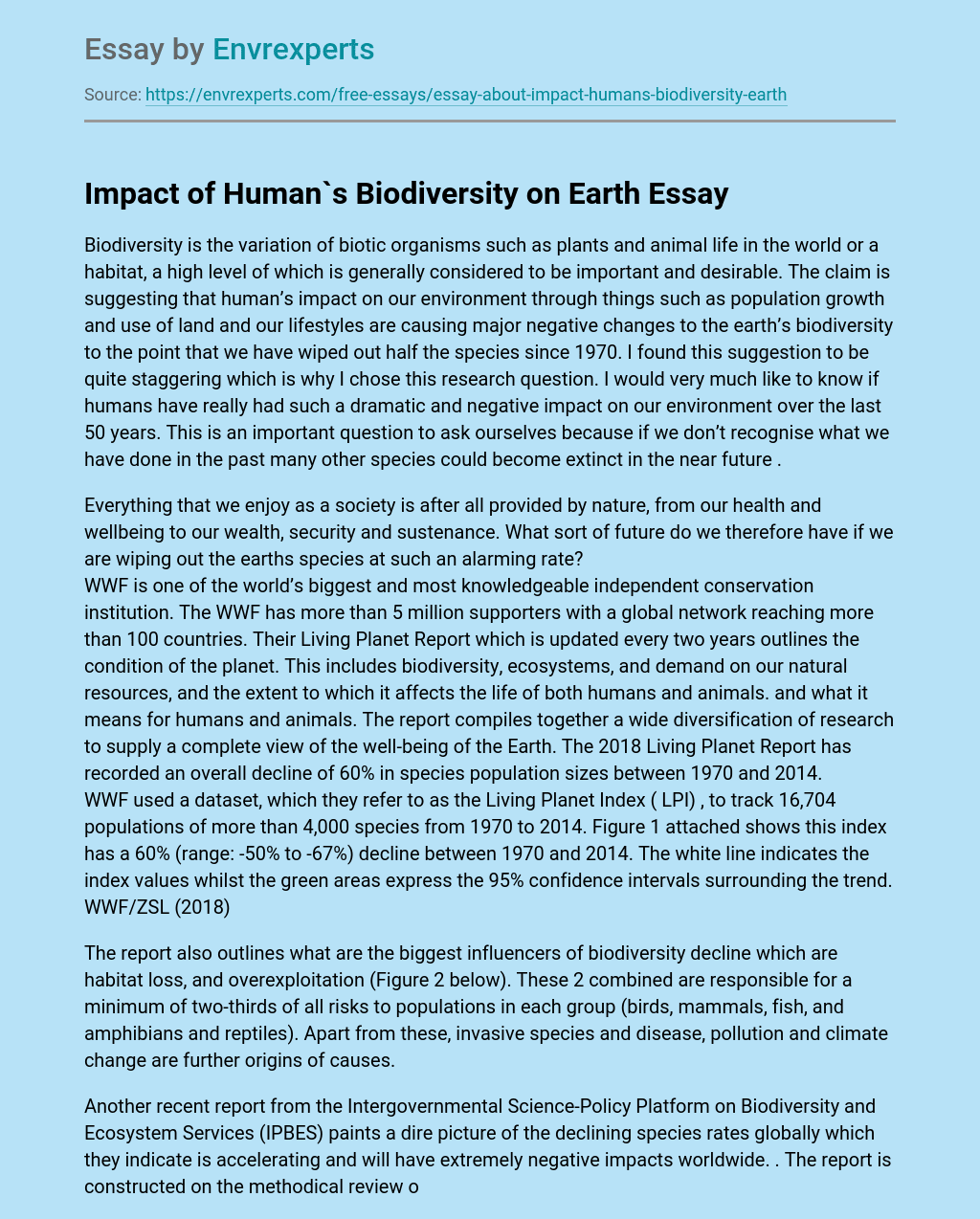