Impact of Uranium on Iraq

Depleted uranium munitions are, in my opinion, almost impossible to defend. They're used to kill thousands in Iraq and other places every year. As if regular bullets aren't deadly enough, depleted uranium munitions release radiation as they hit their intended target, exploding and sending deadly radiation in a nearby radius. This radiation kills innocent people, not only soldiers. And there's the issue of friendly fire too; what about our own troops who get hit by these weapons? Even if it's just a glancing wound, the radiation is bound to cause lasting effects in the affected soldiers.

Don’t waste time
Get a verified writer to help you with Impact of Uranium on Iraq
Hire writer
$35.80 for a 2-page paper

There aren't many pro's to depleted uranium munitions, besides their undeniably destructive quality. However, with regular munitions being very effective, why do we need to add latent radiation to the mix?

To be honest, I have no personal experience with depleted uranium munitions; no one in my family or friends has been hit by them and I've never been affected by them in any other way.

But in my reading and from news footage I've watched, depleted uranium munitions are a large problem today and people are still feeling the effects of the munitions from back in Desert Storm. So yes, I have a negative opinion of these munitions and I would find it very difficult to feel any other way about them.

This information would make it seem as if depleted uranium is only perhaps mildly dangerous, but WHO also goes on to say that: “The behavior of DU in the body is identical to that of natural uranium” (World Health Organization 1). This shows how dangerous depleted uranium really is. Depleted uranium is used primarily by the military as an alternative to standard munitions. WHO states it is used because “… of its high density, and also because DU can ignite on impact if the temperature exceeds 600 degrees C” (World Health Organization 1). WHO's stance is neutral on the matter, but I have to ask, are more deadly munitions that much more useful? Some of the other advantages include incredible sharpness and the massive stockpiles of depleted uranium (Bloem 1). While these advantages may make them more deadly than standard munitions, this destruction comes at a high price.

There have been numerous studies done on the effects of depleted uranium, both internally and externally and on humans and animals. While some have not come to conclusive results, many have come to the same conclusion: depleted uranium can have serious health effects when left in the body. One of the most eye opening studies involved the planting of depleted uranium fragments into the muscles of laboratory rats. The results indicated that “DU fragments of sufficient size cause localized proliferative reactions and soft tissue sarcomas that can be detected with radiography in the muscles of rats" (Hahn, Guilmette, and Hoover 51).

While rats are not humans, laboratory rats have been used to test many things also being used on humans in the past, so these results should not be taken lightly. In fact, in the beginning of the report, the authors state that Gulf War veterans who had been struck by friendly fire depleted uranium munitions still had higher than average levels of uranium in their urine years after they had been struck (Hahn, Guilmette, and Hoover 51). This shows that, if anything, depleted uranium fragments stuck inside the body, aren't doing it any good.

Another journal article regarding the effects of depleted uranium pellets implanted within rats, written by T.C. Pellmar and A. F. Fuciarelli along with others, comes to a similar conclusion. The authors state that “accumulation in brain, lymph nodes, and testicles suggest the potential for unanticipated physiological consequences of exposure to uranium through this route" ( Pellmar, Fuciarelli, et al 29). Two studies coming to very similar results is a reason to be alarmed. And this is just a small sampling of the studies done on laboratory rats that come to this type of conclusion.

In another journal article, McDiarmid and Englehardt (among others) wrote about a group of Gulf War veterans hit by friendly fire depleted uranium rounds. Their findings were similar to the previous journal article, once again stating the increased urine level and a possible genetic mutation linked to the depleted uranium fragments (McDiarmid, Engelhardt, Oliver, et al 277). The article also states that, while there were no immediate threats to the kidneys "this evidence of small changes in renal proximal tubule function may be a harbinger of greater effects in the future and emphasize the need to continue surveillance of renal function in this exposed cohort” (McDiarmid, Engelhardt, Oliver et al 292). So once again, I stress, while there may not be immediate evidence of depleted uranium causing great amounts of damage, why wait and see what it does cause?

In another article written by Miller and Blakely (among others), they authors show the results of a study done to see what depleted uranium fragments would do to human cells that were exposed to them. The author's state: “We report the ability of DU-uranyl chloride to transform immortalized human osteblastic cells (HC S) to the tumorigenic phenotype” (Miller, Blakely, Livengood, et al 465). What they're basically saying is that depleted uranium caused perfectly healthy cells to become tumorous. The article goes on to say that “… the implication from these in vitro results is that the risk of cancer induction from internalized DU exposure may be comparable to other biologically reactive and carcinogenic heavy-metal compounds (e.g. nickel). (Miller, Blakely, Livengood, et al 465)”. This confirms that depleted uranium can in fact be a carcinogen.

One of the biggest fears of using depleted uranium is not its implications for wounded soldiers but for the environment around where it is used. Those spent shells don't just disappear; what about the radiation in the air, ground, and water around these battle sites? Luckily, it seems that depleted uranium is somewhat safer in the form of spent shells. The WHO reports that: “For the general population, neither civilian nor military use of DU is likely to produce exposures to DU significantly above normal background levels of uranium” (World Health Organization 3). So it seems that civilian and innocent bystanders are not at risk, compared to the soldiers who get shot by these rounds. Although the WHO does state that spent shells should be cleaned up regardless, to prevent any heightened levels of depleted uranium from entering the human body and the environment surrounding these battle zones ("World Health Organization 3”).

To conclude, I want to state that my views on depleted uranium have not changed. I still think regular munitions should be used instead, for the sake of our soldiers as much as the enemy. Depleted uranium has been shown over and over again to be a dangerous substance and even if there are some studies that disagree, the number of studies and journals detailing the harmfully effects of these munitions far outweigh those who show no harmful link. The articles I read stated almost nothing but negative things about depleted uranium and there have already been some early signs of possible negative effects from it. I was slightly put at ease by the fact that depleted uranium really doesn't have an effect on the innocent people living in the areas theses battles are going on in, but I still think that our own soldiers are suffering enough wounds with standard munitions without having to worry about radiation added to the mix. So, I stand by my position. I believe that depleted uranium munitions should not be used in combat by the U.S. I think the effects on a soldier's body are very detrimental, even more than standard munitions. And I think they need to stop being used before we discover even more negative side effects.

Impact of Uranium on Iraq. (2021, Oct 31). Retrieved from http://envrexperts.com/free-essays/essay-about-impact-uranium-iraq 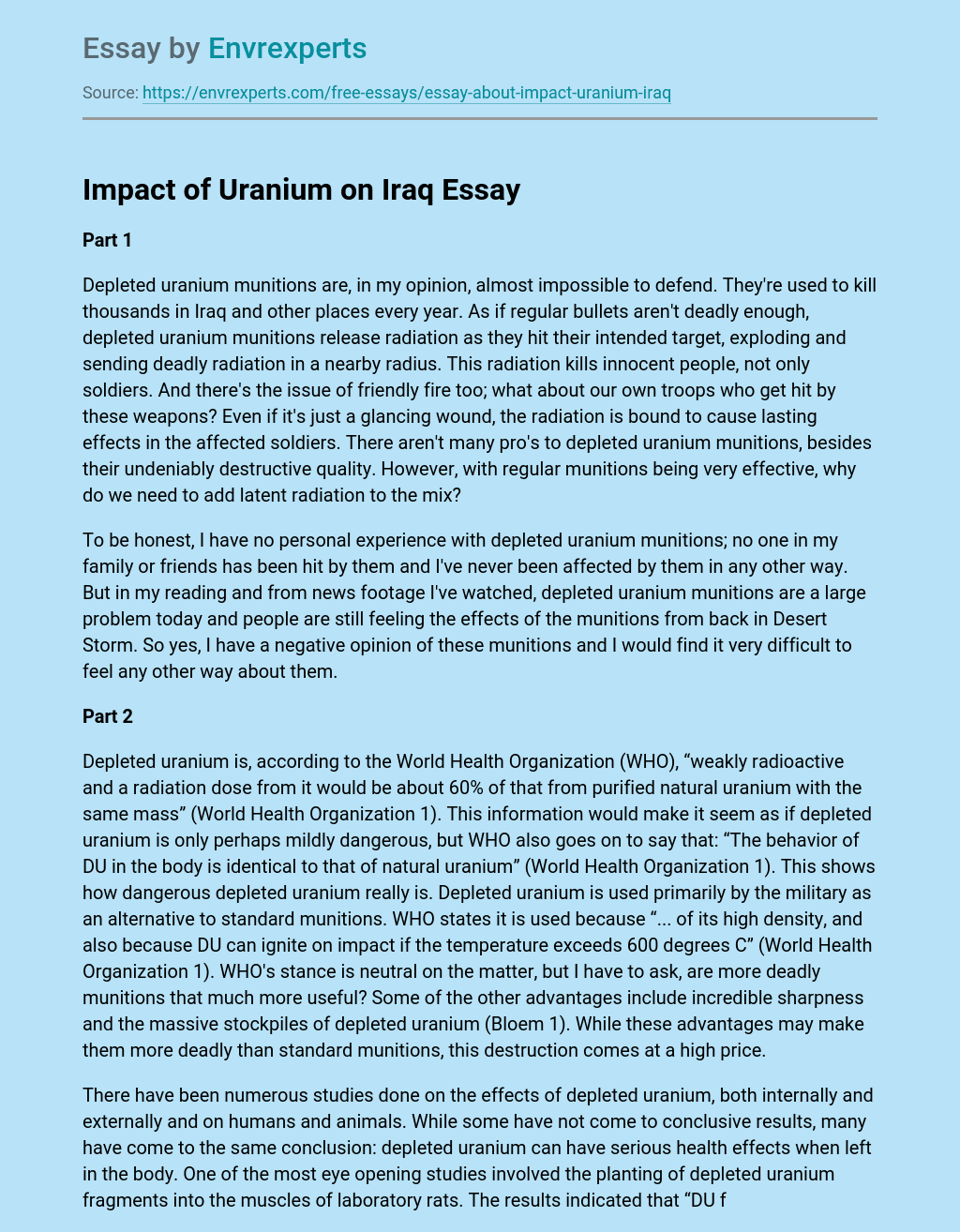