The Impacts of Climate Change on Business and Vice Versa

The current global business environment is very large and influential in the daily lives of over seven billion people living on this earth. As our communication and technology capabilities increase at an exponential rate, the business environment evolves and becomes increasingly integrated and interconnected. Whereas only a handful of companies operated on a global scale just a few decades ago, now it is rare to find an established corporation that doesn’t have at least some of a global presence.

Don’t waste time
Get a verified writer to help you with The Impacts of Climate Change on Business and Vice Versa
Hire writer
$35.80 for a 2-page paper

Climate change is a very public, and highly discussed topic in the public sphere. For all its publicity, however, there has been relatively little effort put into combatting the effects of climate change, and it continues to be a looming problem for the global future.

The problem has a global scope. While certain countries contribute to this problem much more than others (such as China and the United States), the effects of climate change are felt all over the world. For instance, as global warming takes effect, the polar ice caps begin to melt. As this ice melts, sea levels all around the world rise gradually. This means that certain geographic locations lose land mass as the shore moves inward, pushing the population inland.

Other places become entirely flooded, requiring the population in these locations to relocate altogether. (Falkner, 2013)

Because this problem is global in scope, all different types of groups are affected, from indigenous tribes living in the wilderness, to the most influential technology corporations. Everyone feels the effects of climate change, if not in the form of temperature changes, natural disasters, and changes in sea level, in the form of social pressure and secondary effects of those who must change their lifestyle due to climate change.

In examining the issue of climate change with respect to the global business environment, it is very important to understand how businesses around the globe affect climate change. During the age of industrialization, little concern was paid to how mechanization and the industrialized society affected the environment. (Falkner, 2013) Business development was given precedence over how the carbon dioxide emissions and nuclear waste was impacting the natural world. While in many countries, such as the United States, legislation has been passed that effectively limits and regulates the amount of pollution an organization can emit, other countries have not been as proactive. (Nesaratnam and Taherzadeh, 2014) This precedence on business development has remained in many other countries seeking to establish their global economic presence. For instance, China is currently on track to become the number one economic global superpower. The political leaders allow businesses to operate with almost complete autonomy in regards to environmental impacts. As a result, Beijing, the country’s capital, has pollution-based smog so thick that spending a day outdoors in the city is the health equivalent of smoking twenty-one cigarettes a day. (Nesaratnam and Taherzadeh, 2014)

For all the ways in which the global business environment impacts business, so too does climate change impact business. There are businesses around the world, many operating on a global scale, which seek specifically to combat climate change by focusing on the “green” movement. (Falkner, 2013) For instance, some organizations make more environmentally friendly appliances and machinery for use by other organizations. Other businesses offer consulting services to companies in order to reduce their ecological footprint. In fact, many companies intentionally spread information about climate change and the impacts of business specifically in order to improve their own public image by publicizing their environmental efforts.

Aside from the companies that have specifically sought out profit from the issue of climate change, the global business environment in general has been largely affected by climate change. Consumers have been increasingly interested in climate change and its causes. Companies who wish to be successful must be constantly aware of these changing consumer needs. (Williams, page 92) Companies in recent years are largely scrutinized and the ones that are shown to be harmful to the environment face a negative public reaction. Consumers often boycott these companies as well because of their negative effects on the environment. (Falkner, 2013) Furthermore, organizations are now focusing on creating products which allow consumers to reduce their ecological footprint. One need look no further than the global automobile industry to see how the climate crisis has impacted in new lines of products that result in less pollution. (Nesaratnam and Taherzadeh, 2014)

Finally, climate change has impacted the legal environment surrounding business operations. This type of legislation can have a profound impact on the ways that businesses operate, and also what they must do to maintain an ethical public presence. (Williams, 91)

In order to help control and reduce this problem, the principles of PLOC should be applied. PLOC stands for planning, leading, organizing, and controlling. In the planning stage, the elements of what’s causing climate change must be analyzed. Then ideas for how to affect this elements should be concocted. For instance, the government could start taxing carbon emissions of individuals and families, to increase their incentive to pollute the environment less. In the leading stage, the leaders of the world, both politically and organizationally, must come together to make environmentally friendliness a collective goal of all of humanity. In the organizing stage, the available resources and goals must be analyzed to determine how the resources will be allocated and organized to determine how the problem will be affected. In the controlling stage, the activities related to combatting climate change should be examined constantly to determine if goals are being reached, and if not, how to bridge the gap between desired results and actual results. The control stage is largely based on feedback and analyzing the progress of the battle against climate change.

The issue of climate change is an extremely large one. The global business environment is greatly impacted by climate change, and vice versa. However, the problem of climate change extends far beyond the business world. As such, it is important to understand the full complexity and intricacies of this problem before action can be taken. One can only hope that the global society will soon realize how great his problem is and it can be eradicated.

The Impacts of Climate Change on Business and Vice Versa. (2021, Oct 31). Retrieved from http://envrexperts.com/free-essays/essay-about-impacts-climate-change-business-and-vice-versa 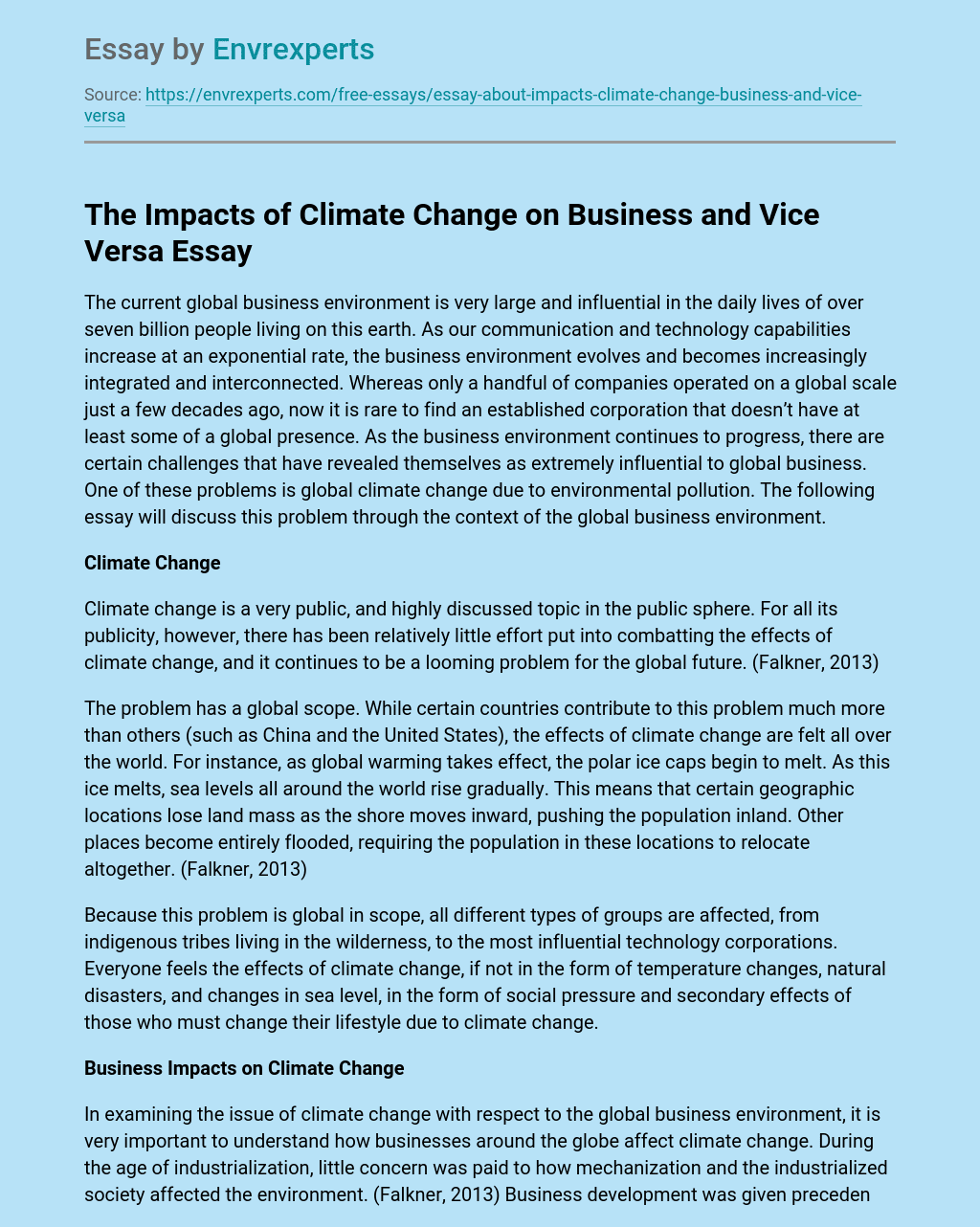