The Amazon Rainforest, which takes up a region called Amazonia, contains a large amount of biodiversity and a variety of human cultures. As all organisms on Earth need water to survive, the large amount of life in the Amazon relies on the water in the region. This water includes the Amazon River, which gives the rainforest its name, along with many smaller rivers, the floodplains all these rivers create, and other water sources. Water is a very important force in Amazonia that plays multiple roles in relation to the area's human communities and natural formations.

Don’t waste time
Get a verified writer to help you with The Importance of the Amazon River in the Amazon Forest
Hire writer
$35.80 for a 2-page paper

From a social science perspective, humankind's relationship to water in Amazonia goes back a long way, as some of the earliest organized settlements in Amazonia were in floodplains (Junk 1997, 16), which are areas that experience periodical flooding (often due to rivers). Floodplains provide good farming conditions in addition to water and wildlife, and these benefits allowed these early indigenous communities to thrive and develop “high levels of social organization” (Junk 1997, 16).

Nowadays, although much of Amazonia's population lives in cities and towns, there are many less technological groups that live on bodies of water, especially the rivers. In his book, Mark Harris recounts his experience visiting a Brazilian peasant village on the Amazon River, and he shows that the villagers use the river for drinking water and for washing clothes (Harris 2000, 1); this village is one of several communities in Amazonia that have less technology and must rely on nearby resources for their water needs.

By mentioning fish soup (Harris 2000, 2) and a hunt in a pond (Harris 2000, 5), Harris shows that much of the food eaten in this village also comes from the water. Although bodies of water are clearly vital for fulfilling these people's needs, water is valued as more than just a physical resource; Harris mentions that the villagers "depend on the river for sustenance, transport, and stories. The river runs through their lives” (Harris 2000, 10), showing that the river is also a means of transportation as well as a central object of emotional connection for the community. There is also an ethnic group of black people that has a similar cultural relationship with another river, the Trombetas, which they live on: this "group of men and women… identifies its members as the ‘sons of the Trombetas'", and "[t]he motion of the river's flow represents for them both the pulse of their existence and the source of social memory, their livelihood and sense of life" (Marin and de Castro 2004, 37). To many people who live on them, these bodies of water are both necessary practical resources and indispensable elements of cultural identity.

From a natural science perspective, water is one of the main factors of the Amazon's distinctive environment. The exceptional Amazon River carries more water than any other river in the world, and its delta – which contains many habitats – is the world's largest river delta (Smith 2002, 1). The movement of salt water in the delta partly determines which marine species are present in the delta's estuary habitat (Smith 2002, 6). Moving water has even played a part in forming the geology under the Amazon delta, as the river carries sediment that has created "a vast underwater sediment cone… off the continental shelf” (Smith 2002, 8). The aforementioned floodplains take up a substantial amount of land in Amazonia – the Amazon River alone has 87,600 square kilometers of floodplains (Junk 1997, 15) – and are an ecologically significant environment that has been the subject of a lot of study (Junk 1997, 3). In the floodplains, the environment is controlled to a great extent by the moving water: "changes in water level, erosion, and sediment deposition modify the habitats and disturb plant and animal communities” (Junk 1997, 455). Some of the floodplains that are most strongly affected by the floodwaters are "along the middle and upper stretches of the Amazon", where the change in water height "dramatically alter[s] the landscape", causing "dry grasslands" to "become marshes and rivers and creeks” (Smith 2002, 10). Some distinctive ecosystem types in the Amazon owe their existence to the presence of water in certain places; these include the mangroves and freshwater palm swamps in the floodplains (Junk 1997, 10). Water is not always a controlling force, however, as it has also been in the opposite position of being controlled by another factor; the Amazon River once flowed to the Pacific Ocean, but due to the movements of geological plates, the river changed course and eventually broke into the Atlantic Ocean about eight million years ago (Smith 2002, 7).

The social science and natural science perspectives can complement each other to show that water and its movements determine many things in Amazonia, both social and natural. This can be seen when Smith lists three issues that “the constantly changing interplay between the realm of fresh and salt waters [in the Amazon River deltahas much to do with”: these issues are "distribution of vegetation", a subject of natural science; "economic activities”, a subject of social science; and the "availability of certain fish and other aquatic resources”, which could be related to both fields (Smith 2002, 6). Combining these perspectives on water can also lead to a deeper understanding of Amazonia's floodplains; they are an environment worthy of both social and natural scientific interest, as they were a birthplace of human civilization in Amazonia, but are also complex natural environments. Also, when the two perspectives are united, it can be seen that natural water-related conditions in the Amazon have an impact on social conditions. For example, the changing water level in floodplains create natural environmental changes that affect the economy by making certain resources easier to harvest; in high water season, logging and heart-of-palm extraction increases, but acai fruit harvesting and crop farming go down (Smith 2002, 10). Water is a central aspect of Amazonia in multiple ways. From a social science perspective, the area's rivers are a physical and cultural focal point to many people who live on them. From a natural science perspective, water changes or determines the conditions of the environment in many places in the Amazon. These perspectives complement each other by showing how nature and civilization can parallel each other and connect with each other in Amazonia. To understand an region of great natural and social complexity like Amazonia, it is important to understand the simpler factors that act as important forces in it, and water is one of the important forces in everywhere that life exists.

The Importance of the Amazon River in the Amazon Forest. (2021, Oct 31). Retrieved from http://envrexperts.com/free-essays/essay-about-importance-amazon-river-amazon-forest 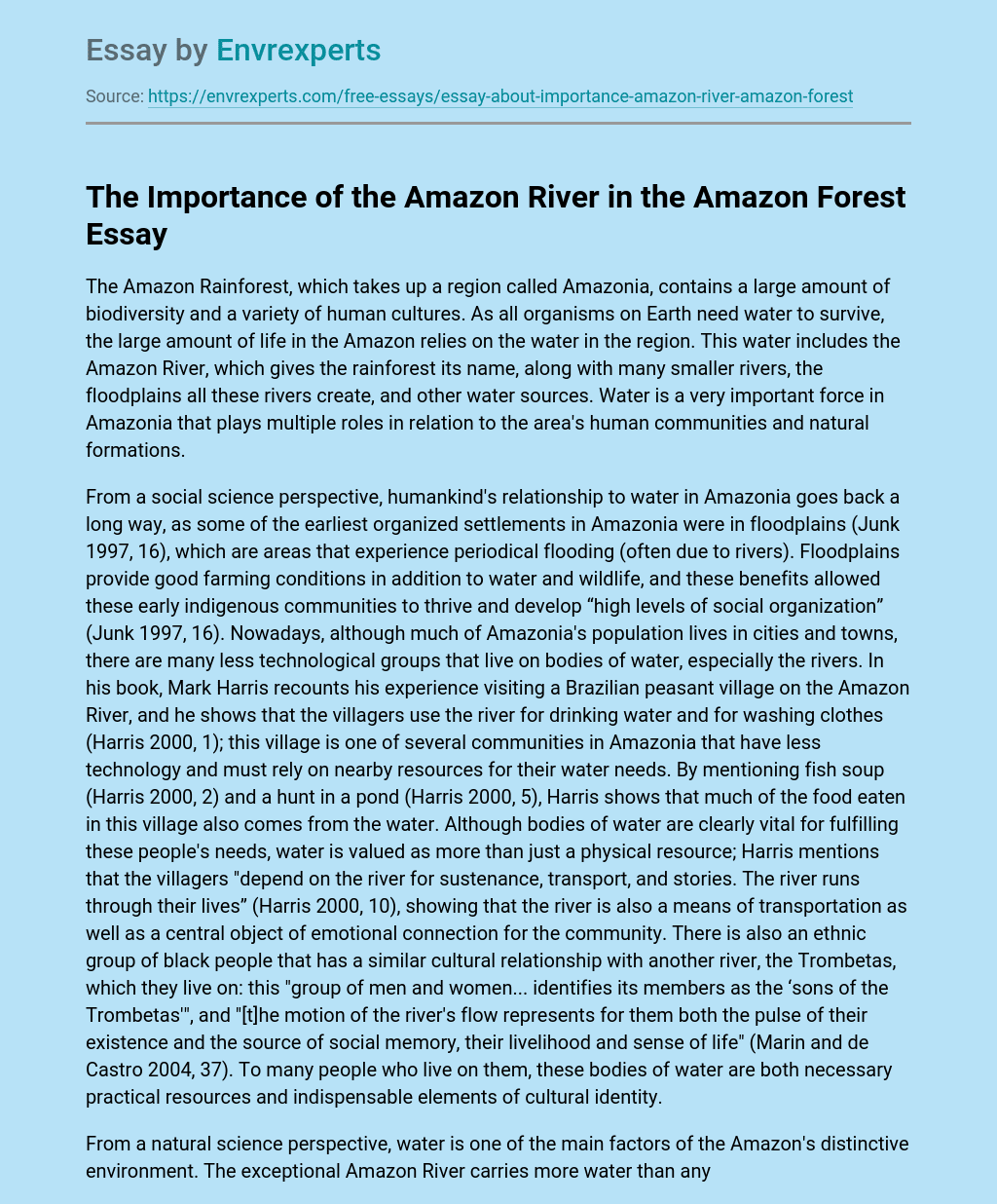