Don’t waste time
Get a verified writer to help you with The Importance and Problems of Environmental Education Shown in Education For Sustainability by Gilliam Symons
Hire writer
$35.80 for a 2-page paper

The media, on the other hand, want to teach us what to think and not how to think. They do so by choosing a certain framework and presenting it to us by visual means. In his work, Participatory Democracy in Enemy Territory, DeLuca shows how the media filter situations so that they affect profit orientation framing and conventions. He shows this in a long analysis of a CBS clip on the Greenpeace confrontation with whalers and he shows how it is presented in a heroic Cold War frame.

The media are often also intertwined with corporations who incorporate them into their strategy to promote their image and self-interest. This has become part of a new rhetoric of Image politics that helps increase corporate power and influence. Therefore, one needs to be aware of the bias that may exist within EE because of the inevitable interconnection between the media, corporations and education.

One of the accusations made by Donna Lee King in the second chapter of her book Selling Environmentalism to kids is that we are often misdirected because of the contradiction that lies in the simultaneous promotion of conservation and consumption.

EE and liberal environmentalism assume the possibility of environmental change with political, economic and social reproduction. This can be illustrated by the ambivalent, enviro-tainment cartoon, Captain Planet. Environmental organizations have often had to reach out to Media moguls such as Ted Turner in order to highlight the issue they are advocating. The packaging-image of an issue is therefore important in order to attract an audience who is looking for a thrilling and entertaining experience. Captain Planet was exactly this. It was the first program that blended environment and education at the same time. It was especially appealing to children because of its apparent universality and optimistic perspective on finding solutions to environmental concerns. However, despite the empowerment it gave to children, it still dealt with complex issues that seemed too easily resolved. It gave the impression that one lived in a fairyland, a conflictfree world. It omitted the differences in interests of all groups involved, narrowing the issue to a one-on-one struggle between the goodies and the baddies who usually remained faceless and nameless. This is one flaw one can find in EE: it shields certain groups such as corporations. EE has become a tool for what Sharon Beder calls the Corporate Assault. Because of the increasing role of corporations, EE has become a way to enhance their image through environmentally friendly projects such as Project Learning Tree, sponsored by the Forestry industry. Businesses create kits to provide educational materials to children. These often contain biased information because of the promotion of a viewpoint that favors consumption. As a result, this commercialized type of education helps students learn how to be good consumers, not good citizens. Because of the increasing corporate influence, there is a growing dependency of schools on businesses. Schools are an important social institution and become an instrument for corporations to pass on their ideology. This is clearly illustrated in Glynis Daniels reading on the content of school books. Textbooks, as cultural artifacts, represent this growing tendency towards a world dominated by the market. If one looks at the different issues they cover, there is a clear domination of two themes. The first one is the economic aspect of the environment and its role in the industry. The second is the utilitarian conservation viewpoint that stresses the need for the preservation of the environment for its future use. The framing of these textbooks mirror our modern social beliefs and values and influence childrens perspectives on the environment, preparing them to become active consumers.

Despite this inevitable corporate manipulation, I think that EE is necessary for the development of critical inquiry, universal knowledge and problem-solving. Not only does it influence children but it also indirectly affects adults and their own perception of the environment. They become aware, because of their close relationship with their kin, of their personal responsibility towards Nature, while keeping a positive outlook devoid of hopelessness and open to finding solutions. Furthermore, despite the oversimplistic representation of environmental concerns and of the ways to deal with them, EE still reaches to a young audience and is a first step towards understanding what is at stake. One cannot expect young children to fully grasp everything regarding the environment and this allows a first exposure to knowledge that can be further developed at a later stage in life. Captain Planet may be seen as a form of commercialized education that is only aimed at developing consumer skills rather than citizenship; however the 30 second tags at the end of each episode still give children an insight on different ways of preserving the environment like changing kitchen habits, recycling, using paper bags and rechargeable batteries etc. In order for EE to be effective, children and students have to understand the need for active citizenship. This can only happen once this basic knowledge is established and it has to be followed by critical inquiry in order to explore alternative solutions.

The Importance and Problems of Environmental Education Shown in Education For Sustainability by Gilliam Symons. (2021, Oct 31). Retrieved from http://envrexperts.com/free-essays/essay-about-importance-and-problems-environmental-education-shown-education-sustainability-gilliam-symons 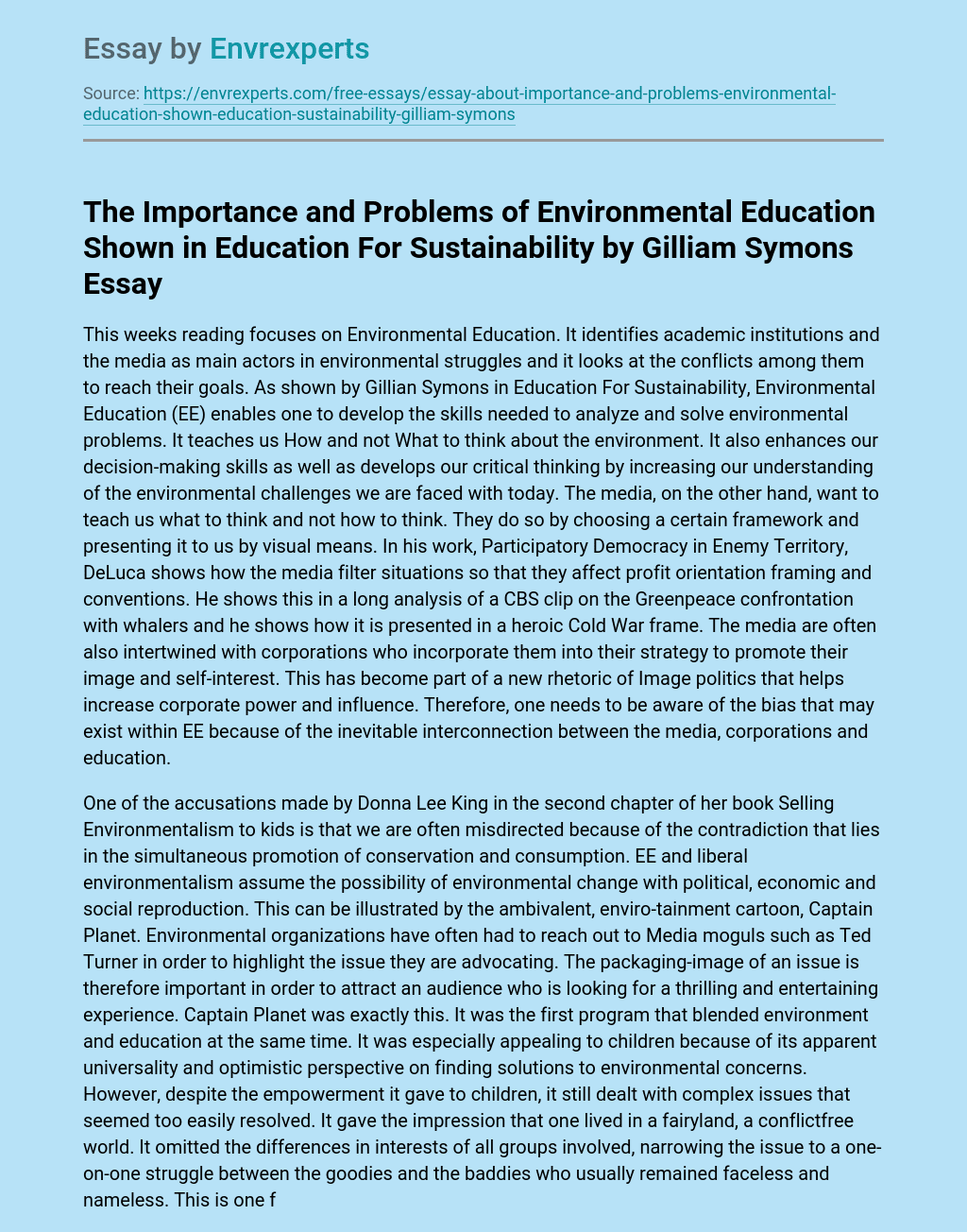