The Importance of Ecological Change and Their Causes

Adrian Dawkins G. Pickren SUST-101 2 March 2020 Changes in our Land In William Cronon’s Changes in the Land the reader is given insight into the ecology of New England as well as insight into Indian and European colonists society, and their interactions with each other. Cronon believes that the actual ecological changes themselves are not as important as to why these changes occurred in the first place.

He feels that people are in an endless cycle creating and re-creating their livelihoods not just through social relations, but also through ecological relations.

Don’t waste time
Get a verified writer to help you with The Importance of Ecological Change and Their Causes
Hire writer
$35.80 for a 2-page paper

In this essay I argue that the natives lived a more sustainable lifestyle, while the colonists were more wasteful and less concerned about their environmental impact. To support my argument, I describe the ways that the Indians lived within their means, and how their interactions with the Europeans came to reshape both cultures.

These arguments will demonstrate the important changes in the land that are at the heart of Cronon’s book.

On the first pages of this book, the author provides a description of the changes that occurred between sixteen hundred and eighteen hundred in the region. His writings and discussions are heavily based on the works of the European visitors. Cronon reveals how the Europeans use of the environment is different from the way of the Indians. The European settlers lived in the established settlements, and they viewed the land as a source of production of commodities. There existed laws that regulated the ownership of land and how it was to be utilized (Cronon 9).

Indians had a different view on property, which arose due to their interactions and diversity. They did not fully rely on the land as their main source of food, they practiced hunting and fishing as a way of supplementing their diet. The Indians survived during the winter since they did not rely on agriculture as their only source of food.

According to the Europeans, the Indians wasted their lives in idle activities, so they did not deserve permanent land ownership. According to the Europeans, land was a very important resource that could produce commodities. Failure to develop the land could indicate losing opportunities for life improvements and making good profits. The author also illustrates how the capitalist ideas had enormous impacts on the environment. He describes the introduction of pathogens and diseases as one of the greatest ecological changes.

This led to the death of more than 90 percent of Indians in some areas, and although the Europeans might not have supported such conditions they did not try to help. Due to the constant changes, the Indians found themselves trapped in the European economy which seriously extracted resources from the environment. The constant food shortages made them engage in trade with the Europeans where they supplied them with different commodities such as fur. The Indians engaged in massive hunting so as to supply the fur; this also created a few negative impacts on the environment (Cronon 124).

Massive deforestation also occurred when the Europeans arrived. Initially, the Indians cleared land so that they could get enough food. However, the Europeans eventually started engaging in selling timber and firewood, thus causing further degradation of forests. Deforestations led to climatic changes, which had a significant impact on agriculture (Cronon 34). Another way in which the Indians differed from the Europeans is that they had a different perception of animals. Indians could only claim ownership of animals only when they had killed them.

On the other hand, the Europeans valued animals and claimed total ownership, this eventually led to fencing as a way of protecting animals. The demand for grazing land increased, and the destruction of the environment also continued. The need to transport animals resulted in long-term deforestation since trees had to be cut for roads that were to be expanded. The European trade systems and their agricultural activities had far-reaching implications on the environment. These practices resulted in soil exhaustion and constant erosion.

The continuous deforestation had long-lasting effects on both the current and future generations of New England. The irresponsible farming practices resulted in climatic changes, which continue to this day. The Indian way of life, in contrast to that of the European settlers, was much eco-friendlier, not only that but it was a much more sustainable way to live. And they lived semi-nomadic lives. While the colonists lived in established settlements and

The Importance of Ecological Change and Their Causes. (2021, Oct 31). Retrieved from http://envrexperts.com/free-essays/essay-about-importance-ecological-change-and-their-causes 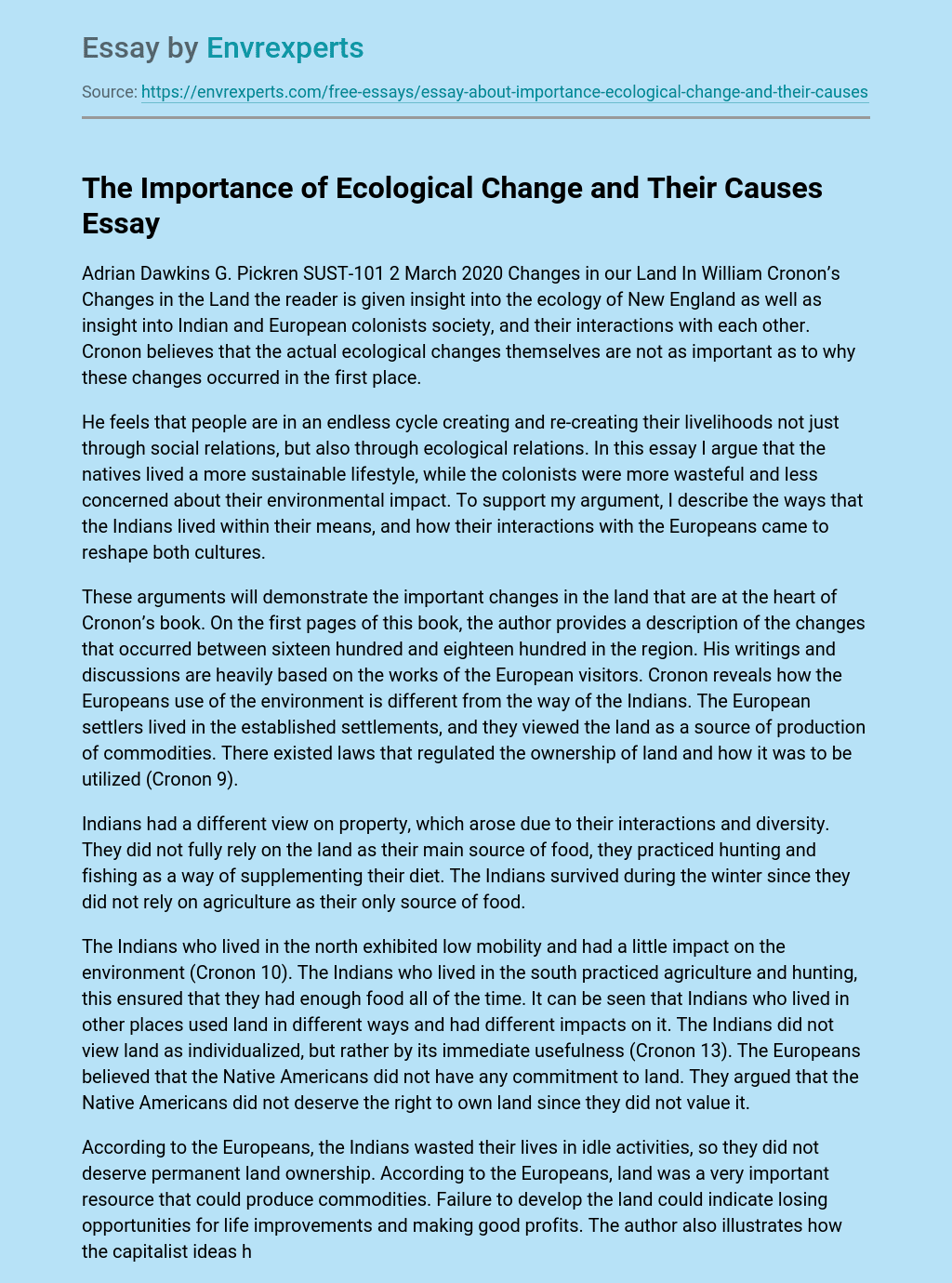