Importance of Energy Efficience in 21 Cenury

Background of the Study Energy is essential to life in the 21st century. Modern energy service play a key role in facilitating access to fundamental necessities such as clean water, sanitation and health care and advance development through the provision of reliable and efficient lighting, heating, cooking, mechanical power, transport and telecommunication services. Women of drudgery and to provide them more time to care for themselves and engage in activities that are more productive to them, thereby leading to empowerment and greater gender equality.

Don’t waste time
Get a verified writer to help you with Importance of Energy Efficience in 21 Cenury
Hire writer
$35.80 for a 2-page paper

This study highlights gender-related factors and attempts to understand their influence in residential energy consumption which are doing in Addis Ababa city, Ethiopia. Energy consumption included household uses of power for lighting, entertainment, thermal comfort and cooking. It also estimate based upon electrical and other local energy consumption. Ethiopia is still at low level of development of energy infrastructure and access to energy.

For instance, while developing countries’ average for Electric Power (kW Installed Capacity per 1000 persons) is 272, Ethiopia achieved only 8 kws.

The present total energy generation capacity is 1083MW, also in terms of Electricity Consumption. (KWh per capita) in the year 2007, Ethiopia averaged at 24 kWh whiles the developing countries ‘average was 938 kWh. Rapid population growth, low per capital income, the recent boom in the construction sector, and limited investment have led to increasing in pressures on energy supplies in Ethiopia.

Shocking increases in the costs of various forms of energy, and shortages of some resources, now cast energy efficiency as an overarching issue in terms of the environment, consumer pricing, employment, and national security.

In this paper, the author calls for the continued development of new technologies, supported by broader governmental policies and programs, to meet growing energy demands in the country, Ethiopia.

According to World Bank Group data from 2014, roughly 27% of the Ethiopian population has access to electricity. In a country of 100 million people, this means more than 70 million people without power in their homes. Around 80 million people in Ethiopia live in rural areas, and while a small fraction of these households is starting to power up, there is still a long way to go.

According to Andrew (2015) asserted that the most important need in life is the availability of energy to drive social development and industrial competitiveness. On the other hand, despite the need for improved access to sustainable energy, Ellingsen (2010) stated that there is still a constant growth in energy inequality, as most rural households across the world continue to struggle to access modern energy services, leading to increasing reliance on traditional bio fuels. Pachauri and Rao (2014) highlighted that energy inequality was commonly analyzed on the income or some related monetary measure, as prevailing disparities in income would closely mirror inequalities in energy accessed and consumed; and Disparities in energy quantities consumed and types of energy sources predominantly used.

The authors argued that the distribution of modern energy sources remained highly unequal, with a much higher dependence on environmentally unfriendly energy fuels by most people, especially in developing countries. Many households or individuals have limited access to modern energy sources such as electricity, Liquefied Petroleum Gas (LPG), etc. for household needs (especially in Ethiopia). Energy is important for the whole economy as it is for household needs. It forms part of the basic needs of individuals, as it helps to provide warmth and lighting, is also used for cooking of food.

A household which uses traditional forms of energy, notably charcoal and firewood for cooking, lighting and any other needs may be prone to hazardous health implications (Legros, Havet, Bruce, & Sophie, 2009). Without modern energy services, the poor will continue to be poor as they will acquire and use fuels that are injurious to their health. Many spend hours a day walking long distances to collect firewood because their cooking stoves are the traditional one (usually three-stone open) (Bartels, 2007).

Without sufficient clean fuels for cooking, women mostly in Africa will continue to be exposed more than anyone to indoor air pollution and its health effects. If one household has better access to healthcare, educational services and other public services than another household at the same level of income, then the two cannot be said to be equally deprived. In the energy-poverty literature, when an individual or household is deprived of modern energy sources (e.g., electricity, LPG) or is using the traditional biomass for its energy needs, such an individual or household is considered to be “energy poor”.

The literature on poverty across the world shows that, indeed, income deprivation should not be considered as the only dimension of poverty as deprivation in other dimensions of human life-sustaining activities such as education, life expectancy, access to modern energy sources and room availability in the house are significant both in rural and urban areas in determining poverty, and not necessarily related to deprivation in income (Alkire & Santos, 2010).

Importance of Energy Efficience in 21 Cenury. (2021, Oct 31). Retrieved from http://envrexperts.com/free-essays/essay-about-importance-energy-efficience-21-cenury 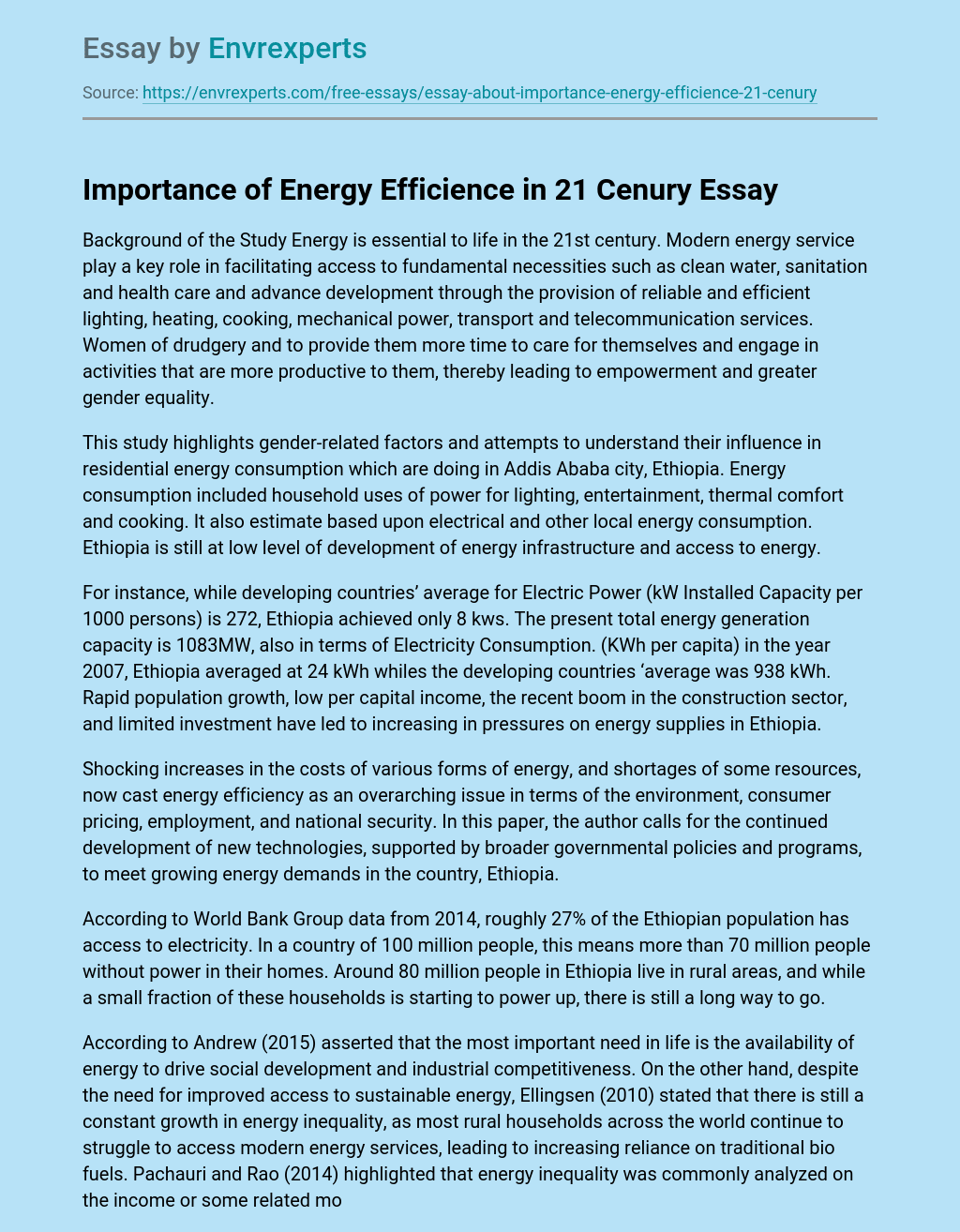