While the issues of global warming and the Kyoto Protocol are notexclusively Asia-Pacific topics, this essay will discuss the importanceof Australials role, along with the United States, in undermining thistreaty. To a lesser degree, the roles of India and China will alsobe examined. Particular emphasis will also be placed on the economic,environmental and political aspects involved in the topic. Statisticaldata will also be offered to support this analysis.The Framework Convention on Climate Change, instigated by the UnitedNations, was held in Kyoto, Japan in December 1997.

Don’t waste time
Get a verified writer to help you with Importance of the Issues of Global Warming and the Kyoto Protocol in Australia
Hire writer
$35.80 for a 2-page paper

More than 2,200delegates from 161 nations took part in this summit to help forge aninternational treaty now known as the Kyoto Protocol. We can see fromthe map provided that the major stakeholders examined in this essayencompass the entire Asia-Pacific region.The objective of the Kyoto climate-change conference was to establish alegally binding international agreement, whereby, all the participatingnations commit themselves to tackling the issue of global warming andreduce greenhouse gas emissions (GGEIS).

The target agreed upon atthe summit was an average reduction of 5.

2% on 1990 levels by the year2012. Table A, at the end of this essay, details the negotiated targetsfor each Annex 1 nation.At the close of negotiations, Luxembourgis Environment Minister JohnnyLahure, was jubilant when he announced, I Today there are no losers andonly one winner, the environment. However, it is difficult to understandhis enthusiasm.In reality, it would take an immediate reduction of at least 60% to makean impact on the greenhouse gases that have been accumulating in theatmosphere since the onset of the industrial revolution.

Given this,even if it is ratified, the Kyoto Protocol will achieve little forthe environment.Now, thanks entirely to the United States and Australia, ratificationof the treaty may never eventuate. Australia and the US arrived at thetalks as hostile participants with entrenched positions. Central to USobstinance was the lack of participation from China and India. Althoughmajor polluters themselves, because they are developing countries,the Kyoto accord does not require them to reduce their emissions at all.The Americans advocated an lall ind policy. That is, both developedand under-developed nations should be required to reduce greenhouse gasemissions and comply with the treaty.

As it stands now, China and Indiacan increase their emissions I they are not bound by the treaty.Consequently, the US objected. However, it would appear this American argument is a spurious one. The United States is the worldis mostindustrialised nation and as such is responsible for a staggering 25%of global GGEIS. As the worldás biggest polluter, couldnit it be arguedthat they have a moral obligation to lead by example?As developing nations, in particular China and India, become moreindustrialised, they will require guidance and leadership in establishingclean renewable energy resources. However, if the worldis largest polluterisnit interested in taking measures to curb the effects of global warming,it is unlikely that they will.Then in March 2001, the new Bush Administration politicallydumped the Kyoto Protocol, finally ending speculation on the USposition. [President] Bush has no interest in pursuing the KyotoProtocolo, declared the US Environment Protection Agency chief, ChristineWhitman.Within a few weeks, Australia also showed their desire to jumpship. Australials Minister for the Environment, Senator Robert Hill said,Welve always said we wouldnit ratify [the Kyoto Protocol) ahead ofthe USI. In essence, it is a case of if they donit I we wonit. However,one canit help but feel that the US retreat simply gave the AustralianGovernment a convenient excuse to pull out. The Kyoto accord was a low priority for the Howard government from the very beginning.Australia was one of only two nations that successfully negotiated anincrease in their GGEls. They were allowed to increase their emissionsby 8% on 1990 levels by 2012. Prime Minister John Howard describedthis political victory as a terrific result: for Australia. However,the Australian Bureau of Agricultural and Resource Economics (ABARE)have recently released a sobering statistic.If Australia fails to take any counteracting measures between now and2012, ABARE says their GGE increase will actually be 35% – way abovethe negotiated target.

Exactly how John Howard planned to achieve thisIterrific results is still not clear.Australia relies very heavily on fossil fuels and is the biggest emitterof greenhouse gases per head of population. With 76% of their energyproduction being sourced from coal and oil, the task of reducing GGEISwill be a very difficult one. Perhaps the task is so difficult, it wasnever seriously on the agenda.However, Australials reluctance to recognise the importance of globalwarming is quite puzzling. Australials delicate ecological balance isparticularly vulnerable, more so than other nation in the world. Muchof their landmass is semi-arid and subject to drought, extremes of temperature and sensitive to El Nino cycles. Add to that soil salinityproblems and temperatures that are already higher than optimum foragriculture in many regions.Australials economy is also dependent on $31 billion in annualagricultural exports. Tourism in the Great Barrier Reef alone is worth$1 billion each year. Surely then, if any country has a strong nationalinterest in avoiding climate change, it must be Australia.Disintegration of the Kyoto Protocol will also deliver another economicblow to Australia.

Emissions Trading between nations is likely to ceasewithout US involvement in the treaty. Under the Kyoto accord, a countrycan gain carbon credits by planting forests, then sell these credits tonations that overextend on their negotiated GGE levels.Australian State Forests were very keen to take advantage of the EmissionsTrading system, and it was seen as a new multi-billion dollar a yearindustry. As an example, this year NSW State Forests won a contractfor carbon credits with Japanese electrical company TEPCO worth $120million. However, the viability of Emissions Trading is now in severedoubt without the support of the US.Economic considerations aside, the lurking dangers of global warming arerising sea levels, due to the melting of the polar ice caps.

Consider a nation like the Maldives, a small group of islands in the IndianOcean. The average height of land in the Maldives is only a few metresabove sea level. If the issue of greenhouse gas emissions is notimmediately addressed, the Maldives, in the not too distant future,will be completely under water.Climate change is a global concern and we can see that Australialsreluctance to seriously participate in the Kyoto Protocol will haveadverse repercussions for the entire Asia-Pacific region, not justAustralia. It is also clear that, in this instance, Australia is alltoo willing to dance to Americals tune. It is the responsibility of theworldis two most notorious polluters to take the lead role in reducingGGEIS, not to turn their backs to the problem.Table AThe individual commitments for each Annex 1 (developed) nation:

Importance of the Issues of Global Warming and the Kyoto Protocol in Australia. (2021, Oct 31). Retrieved from http://envrexperts.com/free-essays/essay-about-importance-issues-global-warming-and-kyoto-protocol-australia 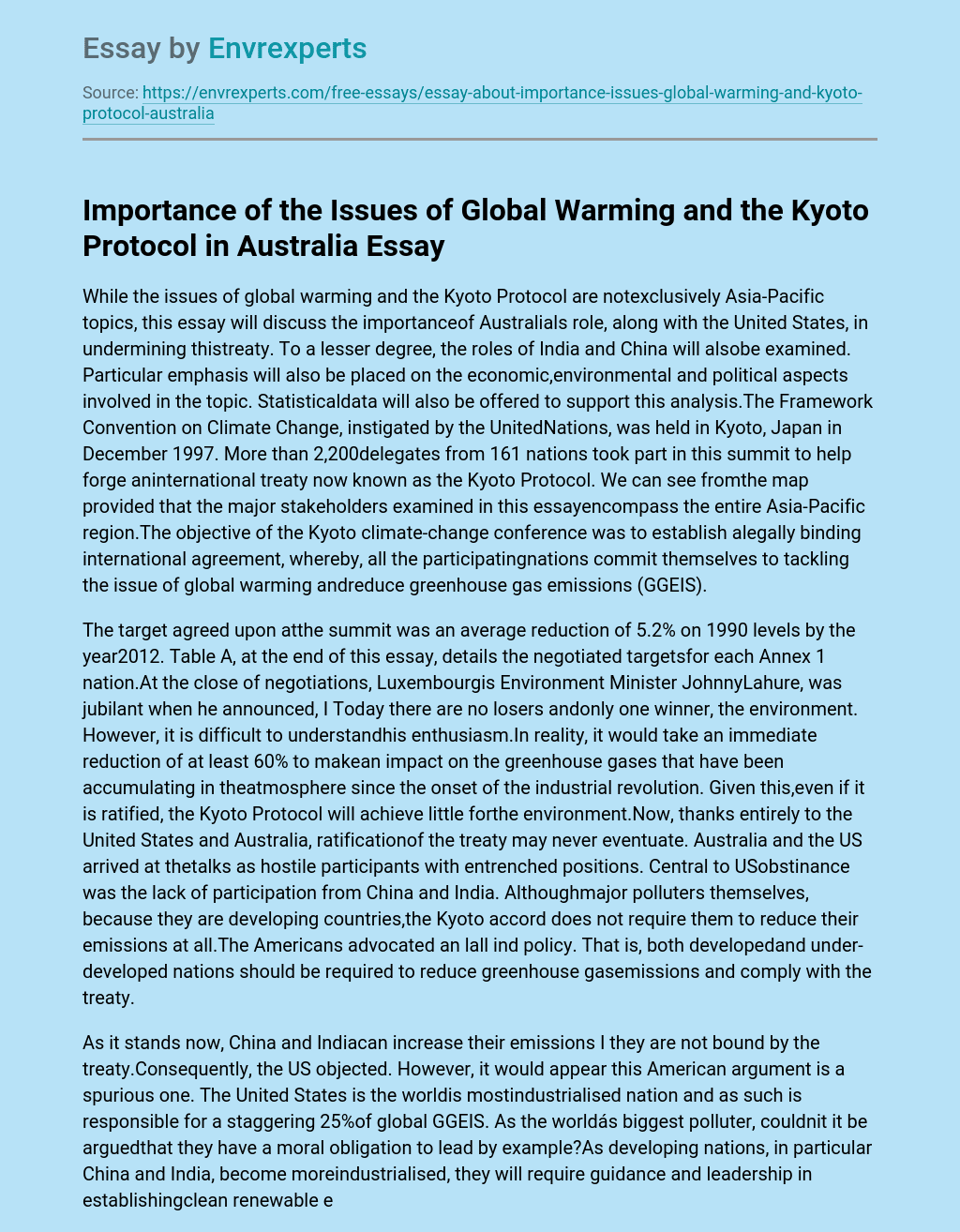