The Importance of Recycling to Prevent Water Pollution

Imagine not being able to take your daily hot shower, brushing your teeth over the faucet or not even having clean water to drink? There are almost 800 million people around the world that do not have access to clean water and thousands of people die every year due to drinking contaminated water. Water is a vital natural resource that is needed in everyone's daily life. Water pollution is a huge problem and it just keeps progressing. Trash and millions of recyclable products are found in rivers, lakes and all over in the ocean.

Don’t waste time
Get a verified writer to help you with The Importance of Recycling to Prevent Water Pollution
Hire writer
$35.80 for a 2-page paper

If the majority of products thrown away are recyclable products, why are they so often found in the ocean and in landfills? These products can be recycled and the plastic or rubber or whatever it is, can be used over and over again, rather than polluting our earth.

The main reason why there are millions of recyclable products saturating our soil and contaminating our oceans is because people fail to recycle.

The number one excuse for people to not recycle is because it is too inconvenient for them. When in reality it is going to be much more inconvenient when more and more people do not have access to sanitary water anymore. Another excuse people say why they do not recycle is because they believe it will not make a difference if they try to preserve the amount of water they use or try to reduce the amount of waste they produce everyday. Other reasons for people not recycling is because of laziness, the cost or they are simply misinformed about recycling.

I have not always been known to recycle. Until I was informed about how harmful pollution is, I started recycling. My family has always recycled in ways such as having a separate trash can for water bottles and cans. We save bags of cans and go take them to be recycled every so often. Another thing my mom always made us do is keep empty coffee cans or similar plastic tubs for organizing her tools. One way that I have always recycled is by turning trash into art. Examples of this being cutting up magazines and creating a picture, or turning a magazine into a decorative item. Other activities that I have done to reuse are painting a water bottle and turning it into a piggy bank, turned old chairs into flower pots, and one project that I plan to get to soon is using two of my old snowboards and create a bench. No matter how you reduce, reuse or recycle, it will make a difference. If more people start to do these three things the less amount of trash is thrown away.

Water is polluted both by man made activities and natural disasters. One man made activity that causes a lot of pollution is businesses and Industries. Industries produce enormous amounts of waste which include harmful toxins and chemicals. These industries dump their waste into rivers and lakes which later on lead into the ocean. Another reason for our polluted water is sewage water, this contaminated water is chemically treated and then is dumped into the ocean. Sewage waste still contains harmful chemicals and pollutes the water. Sewage pipes can also crack underground and leak into the soil and groundwater, then making it unsafe for human consumption. Another way that water pollution is caused is by marine dumping. Instead of taking their trash to the dump, some people dump it into the ocean thinking it is the better option. Trash also gets into the ocean by getting washed in. Hundreds of beaches are covered in trash and the trash is later swept into the ocean.

Many things are affected by contaminated water being humans, animals, and soil. Even landfills can contaminate our drinking water. There are over 13,000 landfills just in the United States, 10,000 of these landfills are no longer being used. Even though some of these landfills are not being used, the trash still remains. This trash being paper, plastic, rubber, etc., release nasty chemicals into the ground soil which can lead into our groundwater supply and contaminate it. Once the groundwater or the soil is contaminated any crops that grow in untreated and unsafe soil or that are watered by polluted water can contaminate the crops as well. This just leading into a chain of events, after the crops are contaminated, if these crops are consumed by any animal or human, the crops can release toxic chemicals into their bodies. If animals or our livestock are harmed by drinking polluted water or contaminated crops it could lead to their death, which only results in people having less animals to consume as well.

Not only are livestock animals affected by water pollution but the marine life are as well. Thousands of sea animals such as seabirds, turtles, seals, and fish are harmed or killed annually because of water contamination and trash floating in the ocean. Animals such as turtles and seals are found with plastic or ropes wrapped around their bodies, causing them to choke and causing them to grow to be deformed. Sea turtles are known to accidentally mistaken floating plastic bags for jellyfish, after consuming this plastic it cannot be digested, this causing the turtle to slowly die. Water contamination is causing thousands of fish and other sea life to die and wash up on the beaches.

Only 2 percent of water is fresh on the earth and only 1% of it being clean drinking water, while the rest being salt water. An average american uses 100 gallons of water per day by taking showers or baths, flushing toilets, washing hands, brushing teeth and by drinking it. Not only do we use water for our own sanitary reasons we use it for many other things as well. Water is used to hydrate all of animal life, so being your own pets or livestock that you are raising, it is also used to water our grass, gardens and farmers crops.

The Middle East and North Africa are the most water scarce places in the world. Out of the 1% of fresh drinking water that the earth has these places only have access to 1.4% of the water to share. In North Africa 5,000 children die every day caused by water diseases such as diarrhea, cholera, and typhoid fever. Children are more likely to get water related diseases and dying from it because their immune systems are still in development. Their bodies are not strong enough to fight off harmful bacteria and parasites found in dirty water. On average a healthy amount of water used per person is at least 50 liters per day. In North Africa per person they are only allowed 20 liters of water per day while Americans use ranging from 200 to 500 liters of water per person per day

Having access to clean drinking water has never been a problem for me. All growing up and still today I have always had the advantage of having clean water for bathing, brushing my teeth and for washing my hands. I cannot even imagine not having running water right in my home or having to travel to get small, limited amounts of water.

Even though the world will never run out of water, we can run very low on clean, safe water for human or animal consumption. Between 6 to 8 million people around the world die every year from water diseases due to not having sanitary water, and from disasters. If the behaviors of humans recycling do not improve it is predicted by 2050 that more than half of the world's population will be at risk because of water stress. Even though most people in the United States and other wealthier countries have access to clean water, millions of people around the world do not. People who do have access to sanitary water, may not have that option in the future because of water pollution becoming a global problem. One way to help clean up ocean pollution and stop deaths from rising from water related diseases is to reduce, reuse and recycle. Recycling preserves our vital natural resources such as water that we consume, soil where we grow our crops and our air that we breath.

The Importance of Recycling to Prevent Water Pollution. (2021, Oct 31). Retrieved from http://envrexperts.com/free-essays/essay-about-importance-recycling-prevent-water-pollution 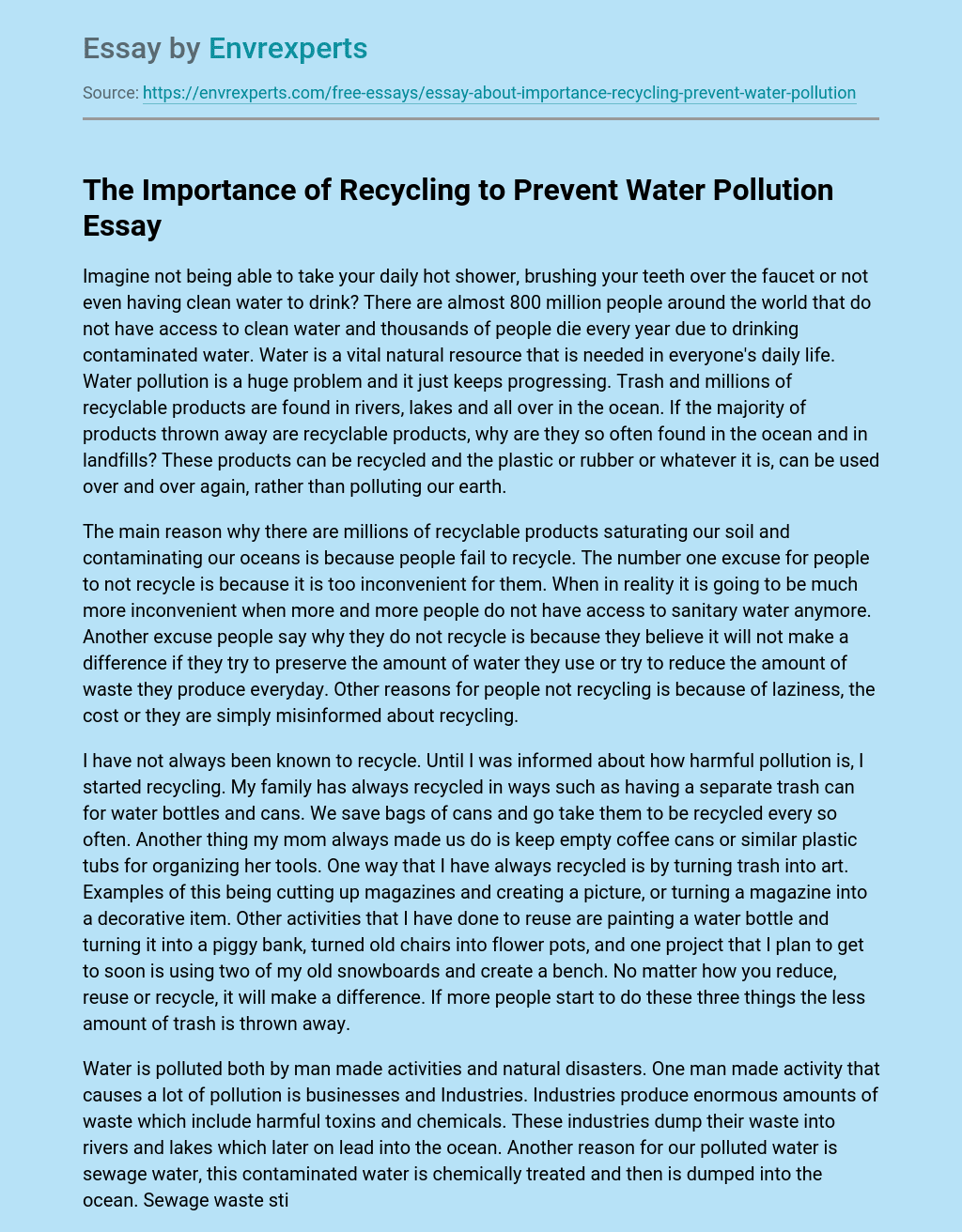