The Importance of Trees in Human Life

Paper is unquestionably essential to education, printing, publishing and numerous other industries. It is widely used for writing, printing documents, photocopying and remains an essential tool of modern communication (MBendi, 2001). Paper is made from pulp, which is a lignocellulosic fibrous material prepared by chemically or mechanically separating cellulose fibres from wood, fiber crops or waste paper (Aremu, Aperolola and Dabonyan, 2015).

Historically, paper was made from materials like rags, however, supplies of the raw material fell short of requirements.

Don’t waste time
Get a verified writer to help you with The Importance of Trees in Human Life
Hire writer
$35.80 for a 2-page paper

It was a discovery by a French biologist that wasps’ nests produced by macerating wood resembled a form of paper, that first suggested that wood might be a suitable raw material for papermaking. The first recorded use of wood for paper-making in Europe was in 1769 but it was not until 1840 that paper made entirely from wood pulp appeared (Lun, 1870).

The devlopment of technology to produce paper pulp from wood and its immediate availability made it quicky become the main raw material for pulp and paper production.

The increasing global paper demand has resulted in the cutting of two out of every five trees for pulp, which is a major reason for deforestation worldwide (Middleton, 2013). Also, pulp and paper production processes are known to release large amounts of pollutants such as chlorine and dioxins, causing air and / or water pollution (Udohitinah & Oluwadare, 2011).

The world is beginning to take radical steps to ensure that environmental impacts from industries, causing global warming, ozone layer depletion and other environmental problems is reduced to the bearest minimum.

This has led to an intensification in the search for non-wood alternative raw materials for the global production of pulp and paper. The quality of paper produced depends largely on the properties of the raw materials. For instance, hardwood pulps are lower in paper strength because of their shorter fibres compared to those of softwoods with longer fibres.

This poses a problem for the Nigerian Pulp and Paper industry, as the tropical climate of the country favors the growth of hardwoods over softwoods. This has led to the industry’s dependence on higly priced imported long fibre pulps to blend with the locally manufactured short fibres in other to make good cultural papers e.g. printing, writing paper and newsprint etc (Akpabio and Akpakpan, 2012). Nigeria being an agricultural country, generates a large amount of different forms of agricultural waste. Generally, these waste are considered useless and disposed of by means such as burning, which tend to have negative impacts on the environment.

Some countries around the world have been able to utilize these wastes as raw materials for their pulp and paper industries (Ogunwusi, 2014). Several studies have been carried out to establish the sustainability of different agricultural waste products for the production of pulp and paper, including the Raw Materials Research and Development Council, Abuja (2014) and the Federal Institute of Industrial Research Oshodi (FIIRO), Lagos, Nigeria (2014). Since agricultural wastes contain cellulose fibers which can be isolated to produce pulp, they are suitable raw materials for the production of pulp and paper.

Numerous research works have highlighted advantages of using agricultural waste as raw materials in pulp and paper production. Sridach (2010), stated that one of the benefits of non-wood plants as fiber sources is their fast annual growth rate, compared to wood trees which can take decades before they can be harvested. Another benefit stated was that non-wood fibers contain smaller amounts of lignin compared to wood and can therefore be pulped with lower chemical charges. The two major considerations for pulp and paper production from agro waste are the raw material and the pulping method employed.

Pulping is the process of separating the cellulose fibers from the raw material by removing the lignin. There are three main types of pulping methods employed namely; mechanical, chemical and semi-chemical pulping. Chemical pulping involves degrading the lignin and hemicellulose contained in the raw material into soluble molecules that can be washed away, leaving behind the cellulose fibers i.e. pulp (Kamoga, Byaruhanga and Kirabira, 2013). The common chemical pulping processes are: Soda pulping, which uses caustic soda as the active chemical. Kraft/Sulphate pulping, which uses a mixture of caustic soda and sodium sulphide.

Sulphite process, which uses either sulphite or bisulphate ion as the delignification agent. Organo pulping, which uses organic solvent as the chemical for pulping (Akpabio and Akpakpan, 2012). All agro waste raw materials have chemical compositions such as lignin content, cellulose content, moisture content, ash content and physical properties such as fiber morchology which affect the properties of the paper produced and determine the specifications of the pulping process such as pulping time and the amount of pulping and bleaching chemicals. These chemical compositions and physical characteristics are important in selecting the agrowastes which are ideal for pulp and paper production. For this reason, research.

Paper is one of the most used materials in the world today, with applications in almost every aspect of everyday life. Paper is generally made from wood plants, and with its ever growing global demand, this has led to dangerous exploitation of the world’s forest resources. The most significant effect of this exploitation is deforestation, which is the beginning of a xxxx cycle of negative environmental impacts such as global warming and ozone layer depletion. This has led to an international campaign for the reduction or comlpete replacement of wood plants as the raw material for pulp and paper production.

This study intends to apply chemical and mechanical principles for the production of pulp and paper from corn husk and plantain stem. It would also. Wood contributes majorly as raw material in conventional pulp and paper production worldwide, however, depleting forest resources to obtain wood has made a significant impact on the environment and human.

This has made the search for alternative fibre in non-wood materials imperative in pulp and paper production. (Aremu, Aperolola and Dabonyan, 2015). Also, due to the lack of long fibre pulp raw materials locally and the increasing cost of imported long fibre pulp in many tropical countries in Africa, some researchers including King (1977) and Patil et al, (2011), have recommended that developing tropical countries in Africa should develop their paper production processes that depends more on local raw materials (Ogunwusi, 2014).

Nigeria produces large amounrs of agro waste which can be used to replace wood as the raw material for the pulp and paper industry, but they have not been fullly utilized.

The Importance of Trees in Human Life. (2021, Oct 31). Retrieved from http://envrexperts.com/free-essays/essay-about-importance-trees-human-life 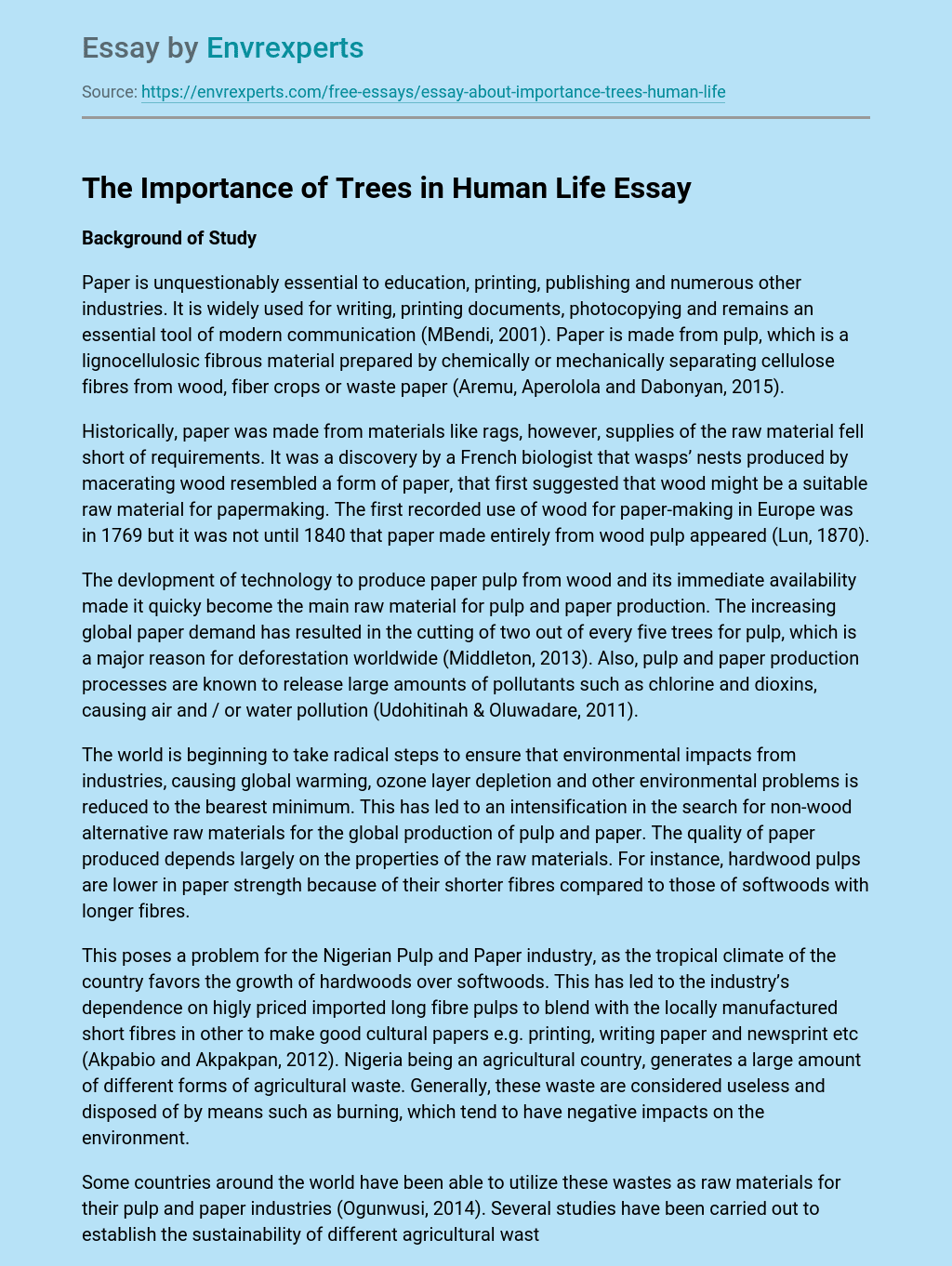