Several improvements in the existing technique is proposed which includes converter design aspects, system simulation &amp; DSP programming. For the control part dsPIC30F2010 is programmed accordingly to get the maximum power point for different illuminations.

Don’t waste time
Get a verified writer to help you with Improved Efficiency of the Solar Energy in Photovoltaic Systems with Direct Control Method
Hire writer
$35.80 for a 2-page paper

DSP controller also forms the interfacing of PV array with the load. Now the improved Incremental Conductance helps to get point to point values accurately to track MPP’s under different atmospheric conditions.

They are an important and relatively inexpensive source of electrical energy where grid power is inconvenient, unreasonably expensive to connect, or simply unavailable.

Solar produce direct current (DC) power which fluctuates with the sunlight's intensity. For practical use this usually requires conversion to certain desired voltages or alternating current (AC), through the use of inverters.

Multiple solar cells are connected inside modules. Modules are wired together to form arrays, then tied to an inverter, which produces power at the desired voltage, and for AC, the desired frequency/phase. Many residential systems are connected to the grid wherever available, especially in developed countries with large markets.

In these grid-connected PV systems, use of energy storage is optional. In certain applications such as satellites, lighthouses, or in developing countries, batteries or additional power generators are often added as back-ups. Such stand-alone power systems permit operations at night and at other times of limited sunlight. Also solar power systems has less amount of greenhouse gases emission.

Each PV cell produces energy pertaining to its operational and environmental conditions. Now for tackling with the problems of the poor efficiency of PV systems several concepts and methods were proposed among which the present technique used is Maximum power point tracking technique (MPPT). Maximum power point tracking (MPPT) is a technique that grid connected inverters, solar battery chargers and similar devices use to get the maximum possible power from one or more photovoltaic devices, typically solar panels, though optical power transmission systems can benefit from similar technology. Solar cells have a complex relationship between solar irradiation, temperature and total resistance that produces a non-linear output efficiency which can be analyzed based on the I-V curve.

It is the purpose of the MPPT system to sample the output of the cells and apply the proper resistance (load) to obtain maximum power for any given environmental conditions. MPPT devices are typically integrated into an electric power converter system that provides voltage or current conversion, filtering, and regulation for driving various loads, including power grids, batteries, or motors.

This paper focuses on the control scheme of how variable step size incremental conductance and DSP controller tracks the maximum power generated from photovoltaic panel which is used to drive load by SEPIC converter. Also MATLAB Simulink are employed for simulation studies and result verification.

Here the solar radiation is converted into electrical power. The proposed method uses PV array of 50V, 5A rating. DSP block has the function of implementing algorithm and conversion of the power from analog form to digital for processing in DSP and enabling proper PWM command for driving the converter. The switching of the SEPIC converter takes place as per the signals generated from DSP according to the algorithm implemented for MPPT.

Photovoltaic Model for MPPT Solar cell is basically a p-n junction fabricated in a thin wafer or layer of semiconductor. The electromagnetic radiation of solar energy can be directly converted to electricity through photovoltaic effect. Being exposed to the sunlight, photons with energy greater than the band-gap energy of the semiconductor are absorbed and create some electron-hole pairs proportional to the incident irradiation.

Under the influence of the internal electric fields of the p-n junction, these carriers are swept part and create a photocurrent which is directly proportional to solar irradiance. A solar cell thus can be basically represented by a PN junction. Under dark condition only reverse saturation current of diode is present. Under illumination photo currents are generated.

Matlab Simulink Model of PV Array Solar cell can be realized in MATLAB as shown in figure below using the current controlled source which is controlled by MATLAB embedded function block which solves solar model equation with Newton’s Algorithm. This block contains the sub models that are connected to build final model. The PVA array consists of 6 PV cells all connected in series to have desired voltage output. Depending upon the load required, the number of parallel branches can be increased to 2 or more. The effects of temperature and solar irradiation levels are represented by two gain blocks.

A.Variable Step Size Inc MPPT The step size for the INC MPPT method is generally fixed. The power drawn from the PV array with a lager step size contributes to faster dynamics but excessive steady state oscillations, resulting in a comparatively low efficiency. This situation is reversed while the MPPT is running with a smaller step size. Thus, the MPPT with fixed step size should make a satisfactory tradeoff between the dynamics and oscillations. Such design dilemma can be solved with variable step size iteration.

In addition, D(k) and step are the duty cycle and change of duty cycle (step size), respectively. The variable step size adopted to reduce the problem. D(k)=D(k-1)± N*|dP|/|dV| — (5) Where coefficient N is the scaling factor which is tuned at the design time to adjust the step size. Thus, |dP|/|dV | is also employed herein to determine the variable step size for the INC MPPT algorithm.

D(k)=D(k-1)±N*|P(k)-P(k-1)|/|V(k)-V(k-1)| (6) Flowchart of variable step size INC algorithm Scaling factor N essentially determines the performance of the MPPT system. Manual tuning of this parameter is tedious and the obtained optimal results may be valid only for a given system and operating condition. A simple method to determine the scaling factor is proposed here.

Comparatively large step size ΔDmax for fixed step size MPPT operation is initially chosen. With such value, the dynamic performance is good enough, while the steady-state performance may not be satisfactory. The steady-state value instead of dynamic value in the startup process of the derivative of PV array output power to voltage can be evaluated under the fixed step size operation with ΔDmax, which will be chosen as the upper limiter as the variable step size INC MPPT method.

It is known that |dP|/|dV | is almost at its lowest value around the PV MPP. To ensure the convergence of the MPPT update rule, the variable step rule must obey the following: N*dPdV&lt;∆Dmax (7)where |(dP/dV )|fixed step=ΔDmax is the |dP|/|dV | at fixed step size operation of ΔDmax. The scaling factor can therefore be obtained as N&lt;∆DmaxdPdV (8) If above equation cannot be satisfied, the variable step size INC MPPT will be working with a fixed step size of the previously set upper limiter ΔDmax.

Equation provides a simple guidance to determine the scaling factor N of the variable step size INC MPPT algorithm. With the satisfaction of above equation, larger N exhibits a comparatively faster response than a smaller N. The step size will become tiny as dP/dV becomes very small around the MPP. B. Direct Control Method Conventional MPPT systems have two independent control loops to control the MPPT. The first control loop contains the MPPT algorithm, and the second one is usually a proportional (P) or P–integral (PI) controller.

The main purpose of the second control loop is to make the error from MPPs near to zero. Simplicity of operation, ease of design, inexpensive maintenance, and low cost made PI controllers very popular in most linear systems. However, the MPPT system of standalone PV is a nonlinear control problem due to the nonlinearity nature of PV and unpredictable environmental conditions, and hence, PI controllers do not generally work well. In this paper, the variable step size IncCond method with direct control is selected.

The PI control loop is eliminated, and the duty cycle is adjusted directly in the algorithm. The control loop is simplified, and the computational time for tuning controller gains is eliminated. To compensate the lack of PI controller in the proposed system, a small marginal error of 0.002 was allowed. The objective of this paper is to eliminate the second control loop and to show that sophisticated MPPT methods do not necessarily obtain the best results, but employing them in a simple manner for complicated electronic subjects is considered necessary. DSP generates pulse width modulation (PWM) waveform to control the duty cycle of the converter switch according to the variable step size IncCond algorithm.

The diagram of the closed-loop system designed in MATLAB and Simulink is shown in Fig.9, which includes the PV array electrical circuit, SEPIC converter, and the MPPT Algorithm implemented for the proposed system. The PV array is modeled according to the design consideration discussed ins section III, Fig.12. Shows the Simulink output for I-V and P-V Characteristics of PV array. PV array current is fed to the converter and the DSP controller simultaneously.

In this paper, a variable step size IncCond MPPT with direct control method was employed and the necessity of another control loop was eliminated. The proposed system was simulated, constructed and functionality of suggested control concept was proven advanced than the prevailing IncCond MPPT. Proper design of the PV array and the converter has made to it improve the efficiency of the existing system to track MPP. The proposed system is simple and easily constructed to achieve expected efficiency level of the PV module. So the proposed system reduce the steady state oscillations, power loss and system cost. 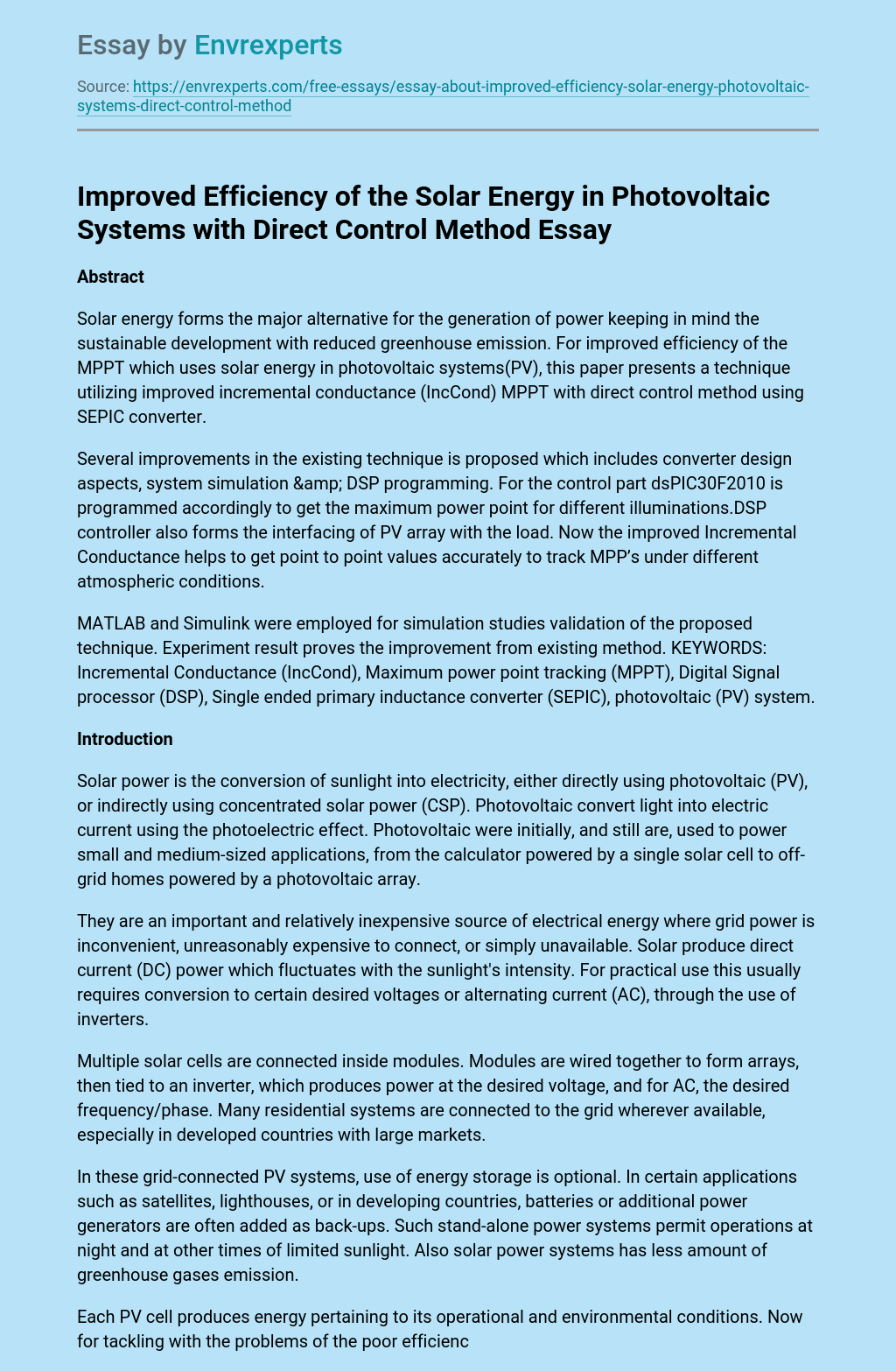