An Inconvinient Truth and Global Warming

Don’t waste time
Get a verified writer to help you with An Inconvinient Truth and Global Warming
Hire writer
$35.80 for a 2-page paper

The interesting fact about these two films are the fact that these both documentaries take completely opposing stands with complete factual information provided, which has put the audiences on crossroads.

‘An Inconvenient Truth’ is an Oscar & Nobel Peace Prize winning documentary film that was released in 2006, directed by Davis Guggenheim. It is basically a collection of clips of Al Gore\'s environmental speeches that he gave multiple times all over the world. The film begins by explaining the overlap between increases in carbon emissions and increases in global temperature.

It provides a brief explanation of the basic foundational theories on how climate change works. It then goes into the impact of these temperature changes on the weather and increases in major storms, like Hurricane Katrina. Other natural catastrophes worldwide are depicted with powerful, often graphic, photos in a slideshow with several live audiences. To avoid leaving audiences feeling hopelessly doomed, Gore rounds out the end of the movie with a call to action, with specific things people can do to slow the rate of carbon increases and climate change.

‘The Great Global Warming Swindle’ is an award winning 2007 documentary film directed by Martin Durkin. This documentary argues against the conventional scientific understanding of the degree and cause of recent, observed climate change. The most overwhelming view about the climate change, especially global warming, that exists amongst the scientists is that twentieth century global warming is largely due to an increase in atmospheric greenhouse gases resulting from increasing industrialization during the last 100-150 years. But Durkin provides an alternative view that recent global warming is neither significant nor due to human activity. The documentary does not attempt to argue the latter view through any critical deconstruction of climate science orthodoxies. Rather, it contends that modern climate scientists are at best seriously misguided in their collective opinion on the nature and causes of global warming, or are at worst guilty of lying to the rest of the community. Publicity for the documentary leans heavily towards the latter, stating that global warming is “the biggest scam of modern times”.

In a competition of ‘An Inconvenient Truth’ vs ‘The Great Global Warming Swindle’, both the films provide a very strong opposition to each other. Each documentary took a definite stance on global warming, whether it is human-caused and on whether climate change presents an imminent danger to human kind. While both documentaries received accolades, both documentaries were also criticized for containing flawed data by those for and against anthropogenic global warming theories. "An Inconvenient Truth" claims that there is a scientific consensus that global warming is anthropogenic (originating in human activity). However, "The Great Global Warming Swindle" disproves that claim stating, "The most highly qualified and respected scientists can be blind to obvious deficiencies in a theory and will be dismissive of evidence when it undermines what they want to believe."

An Inconvinient Truth and Global Warming. (2021, Oct 31). Retrieved from http://envrexperts.com/free-essays/essay-about-inconvinient-truth-and-global-warming 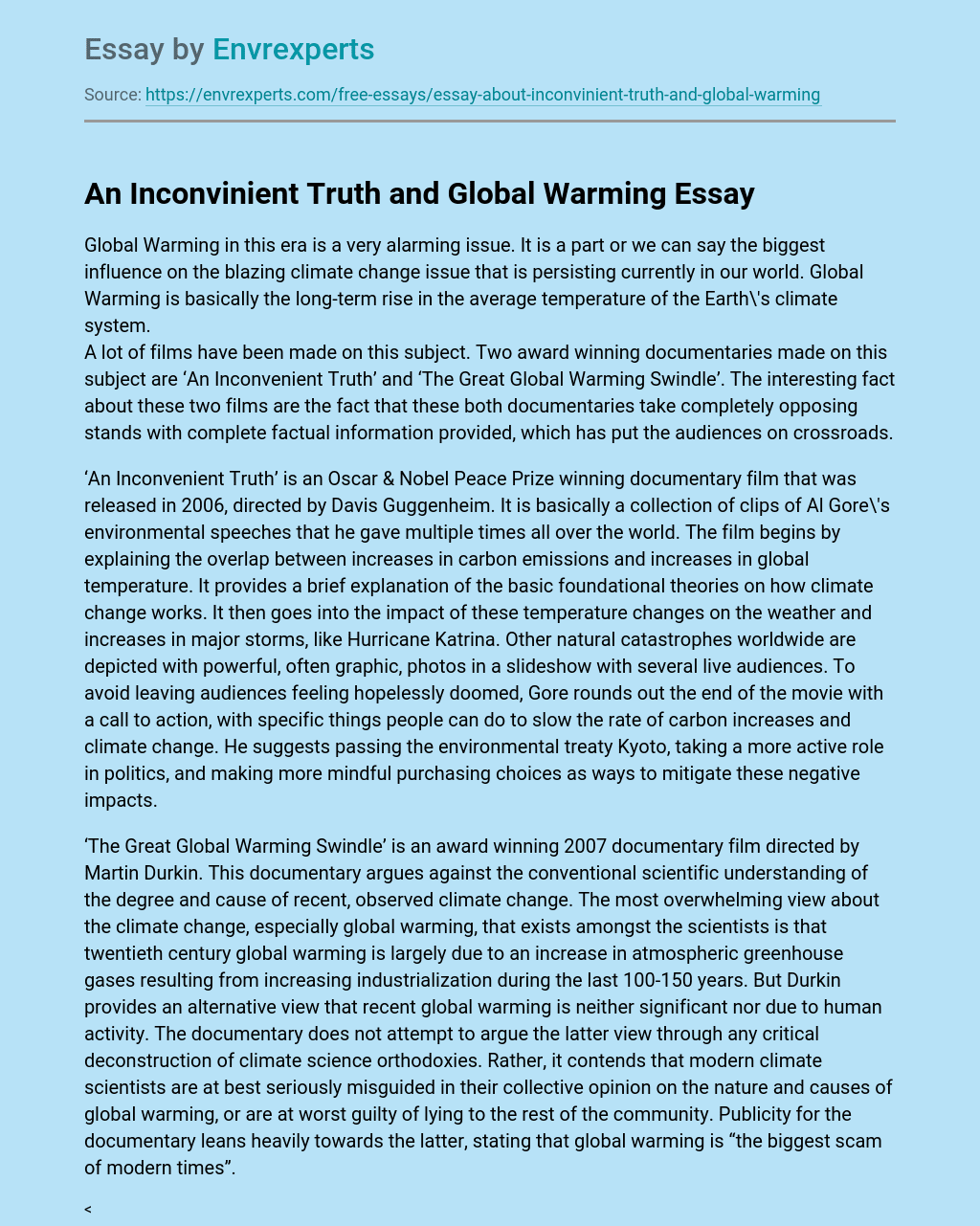